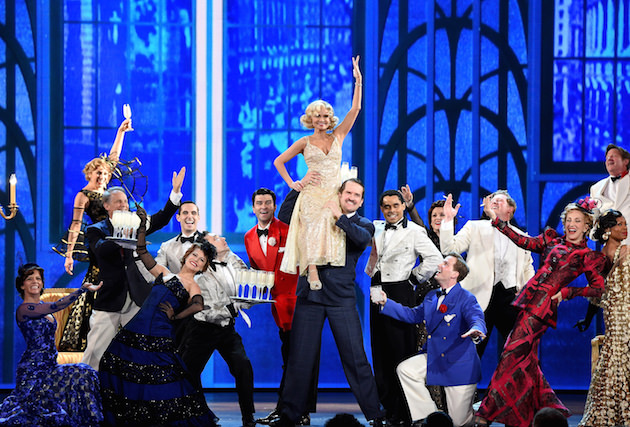 Broadway Meets Hollywood at the Tony’s

On Sunday night the American Theater Wing celebrated the Tony Awards. This star studded celebration showcased Broadway’s best with larger than life performances from this year’s top musicals, plays and revivals. But the Tony’s are also a celebration of film as the two are inextricably linked, both currently and historically.

The connection between Broadway and film dates back the first “talkies.” The musical film, The Jazz Singer, released in 1927 is considered the first motion picture with synchronized dialogue sequences, ushering our modern age of film. The movie was based on the eponymous hit show, which premiered on Broadway in 1925. Warner Bros. bought rights to The Jazz Singer in 1926; swapped Al Jolson for Broadway’s George Jessel, and the rest is movie history. And what was this film about – a rabbi who eschews his father’s dream of him becoming a cantor to become a Broadway star – the interconnectivity of theater and film.

At Sunday evening’s Tony’s the connection between film and theater ran deep. The evening began with Oscar-winning actress Helen Mirren winning the Tony for “Best Actress in a Play” her role as Queen Elizabeth II in The Audience.  Mirren has a penchant for playing British monarchs; she won an Academy Award for playing QEII in The Queen.

A number of last night’s nominated shows have spent time on the big screen. All of the “Best Revivals of a Musical” were also films. The King and I, this year’s winner of four Tony Awards, is a fictionalized biopic about the relationship between King Mongkut of Siam and his children’s governess Anna Leonowens. This musical has spawned a number of films, the three most popular being – the 1956 Rogers and Hammerstein musical based on the 1951 show, a 1999 Warner Bros. animated adaptation, and the 1999 biopic Anna and the King with Jodie Foster and Chow Yun-Fat.

The second in the Musical Revival category is On the Town, about three sailors on shore leave during WWII. Like the King and I, this filmbegan as a Broadway show. It made its debut in 1944, with music by Leonard Bernstein, lyrics by Betty Comden and Adolph Green, and choreography by Jerome Robbins, before moving to the big screen. When the film premiered in 1949, all but three of the original songs were replaced. The film starred Gene Kelly and Frank Sinatra. The current Broadway show is the third revival of the show.

The last of the musical revivals started as a film, and not as a musical. On the Twentieth Century is based on the zany 1934 zany Howard Hawks comedy Twentieth Century about a Broadway chorus girls turned star (Carole Lombard) and her controlling impresario (John Barrymore). It is set on a train from Chicago to New York. The name changed and it became a Broadway musical almost 50 years later in 1978, winning two Tony’s. This revival, starring Kristin Chenowith, Peter Gallagher and Mary Louise Wilson (with whom we spoke in March), garnered five nominations.

“Nice Work if You Can Get It” – The “Best Musical” category also had a nominee that began as a film – An American in Paris. Winner of six Oscars; this 1951 musical was based on an orchestral piece by George Gershwin (lyrics by Ira Gershwin). It starred Gene Kelly as a returning WWII GI and Leslie Caron as his love interest. It includes a 16-minute Kelly/Caron ballet and was directed by Vincent Minnelli. This stage adaptation of the film garnered four Tony’s and 12 nominations.

Gigi, is yet another movie musical (1958), which again starred Leslie Caron in the film version, that grabbed a nomination for its Broadway revival for featured actress in a musical (Victoria Clarke).

In the Broadway/film connection was also evident in the “Best Revival of a Play” category with two Broadway to film and back productions. The 1937 Pulitzer Prize-winner for Drama, the three-act comedy You Can’t Take it With You began as a Broadway show in 1936 then went to be adapted for the screen and won Academy Awards in 1938 for Best Picture and Best Director. The play has had three Broadway revivals before this one (with five Tony nominations and one wine). There also have been several adaptations of You Can’t Take it With You for television. The Elephant Man (four nominations) is based on the life of John Merrick, a man in Victorian England who suffered an extreme physical deformity. The play premiered on Broadway in 1979 with a 1980 film adaptation, which was nominated for eight Academy Awards. The play returned to Broadway in 2002 before this revival.