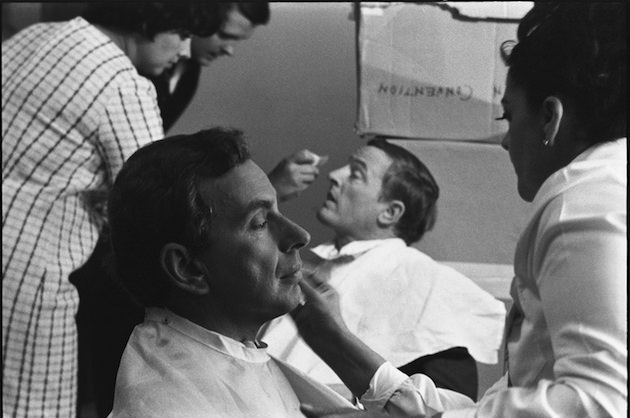 Battle of the Titans: Robert Gordon on William Buckley vs. Gore Vidal in Best of Enemies

Playing at the BAMcineamaFest in Brooklyn and AFI Docs in Los Angeles tonight, Magnolia Pictures' Best of Enemies is a riveting behind-the-scenes account of the explosive 1968 televised debates between liberal Gore Vidal and conservative William F. Buckley Jr., where these two intellectual heavyweights clobbered each other over their views about God, sex, and politics.

We spoke with co-director and producer Robert Gordon about how this film came to be, the current state of the documentary, and why we don't see debates like this on TV anymore.

So how'd you get started on this project?

A friend of mine had a bootleg copy of the debates, and when I saw them my documentarian bells rang loud and clear. I called ABC and made a deal with them about the footage, then I called my film partner [co-director Morgan Neville] and told him that we had a live one, so we began shooting in 2010 when [Christopher] Hitchens was alive and well and not diagnosed in cancer.

What was the production process like? How much footage did you have access to before you were able to start crafting your story?

The nuts and bolts of it is I’m an independent filmmaker, so I don’t have a studio or a bank behind me, and I knew that was a foreign concept to how ABC worked, so I said, 'Has anyone knocked on the door for this footage?' They said no. I told them I couldn't put any money down yet, so I put my own money into a trailer, and I told ABC I just wanted right of first refusal if anyone else comes along. To ABC’s credit, they got it, and they were great to work with. They understood from the beginning what we were doing, and they were friendly throughout the whole process.

How do you make a documentary out a television debate?

They’ve got this archival wing, so I began there. They've got lots and lots of reels of 16 millimeter footage, and I cut my very first film on a 16mm flatbed, so I got to pull out the splicer and do things I hadn’t done in years. Once we got into their archive the story really deepened, because we had a greater sense of everything ABC had going on. That whole moment with the celing falling in? That was news to us. It helped us because, then during our interviews, we could ask people about specific moments like when the ceiling fell in. We didn’t really consider that ABC would end up being the third leading character of the film until we got into the footage and interviews. 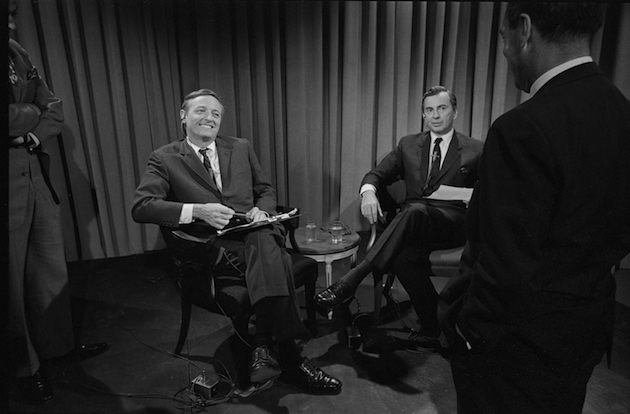 Why aren’t there these types of celebrity intellectuals around anymore? What happened to substantive, serious televised debates?

That’s what I wanted this film to make people ask. I don’t know the answers, but I think one of the things in the process here was that early on we realized, 'Oh my god, people don’t know who these guys are?' Then it was, 'Oh my god, people don’t know what television used to be like!' So we got into that as well. Where on television today could two people who use huge words get fifteen uninterrupted minutes? There’s nowhere. I think what’s happening is we’re all being killed by the bottom line. They realize the long term ramifications of debate is shouting instead of debating, and cut it up as much as possible so you can sell more advertising. So people who watch television have little or no opportunity to witness a public intellectual developing an argument or engaged in real debate. ABC gave them 15-minutes with no commercials! 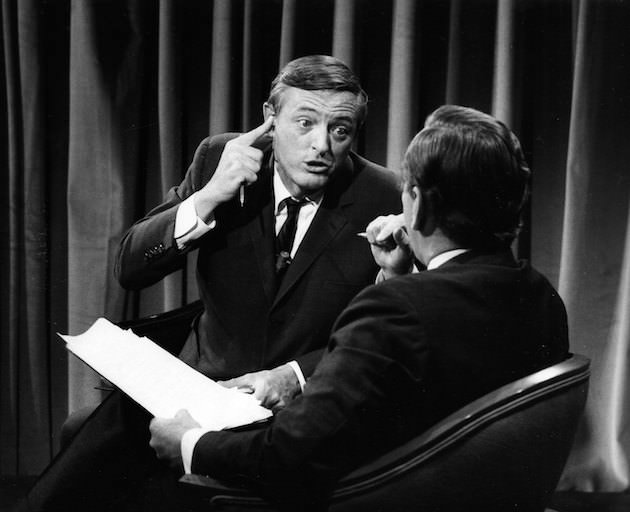 The current landscape of the documentary seems pretty vibrant, both in cinema, on TV and now on podcasts. With your work, Joshua Oppenheimer’s work with The Act of Killing and now The Look of Silence, HBO’s The Jinx, the phenomenon of the podcast Serial…how do you see the role of the documentarian changing? Is it changing?

As a filmmaker, making a film about talking heads, we knew from the get go that our question was, 'How are going to make this cinematic?' We didn’t want to make a visual radio program, so that was a filmmaking challenge that I feel like we conquered very well. There’s really not a lot of talking heads except for the debates, where the tension of the two characters keeps you engaged. In terms of the social effect of documentary filmmaking, I put it on Spellbound, the doc from a decade or so—that was the one broke down the movie theater floodgate. It was like, 'Okay, documentaries don’t have to be boring, and you can draw an audience to the theater.' With The Jinx, they talk about the conflation of narrative fiction and documentary filmmaking…I think that dramatic storytelling is important for documentaries. More people will learn more about the world if you tell a good story, that’s always been the case. They had an interesting issue, 'Should we go to the cops with this information, or, do we save it for our show?' That’s an interesting question, and a rare one, it’s more about, 'Does the storytelling stay true?' Because dramatic storytelling can make you want to bend truth, and I think that’s wrong. But I think the intersection of those two things is a great place to be.

How did you go about making Best of Enemies cinematic?

Finding our way in this film was about knowing where we didn’t want to go. We didn’t want to do talking heads, or get held up in the Chicago scene, so we kept going down the wrong avenues and we’d back up, and I think a lot of the cinematic answers came during the week we spent at the ABC archives, going these ancient broadcasts from Miami Beach and Chicago. The network had done a lot of work taclking this same problem, making these interesting cinematic stories. So we had that to work with, and as we realized that the ABC character was going to be important, it helped us focus on their range of material. I’d never known about the riot in Miami beach, then we found out about it in an interview, then we got the footage of the black broadcaster surrounded by white cops, saying this riot is a product of the Lilly White.

What’s your perfect scenario for this film?

We sold it at Sundance to Magnolia and Participant, and it’ll be in theaters in July, and we it work its way inland. And Participant’s participation is great, because we’ve always believed this doc presents a lot of opportunities for social. We want to try and do live debates at premieres in different cities, whether with national or local figures, and they’re great at that. I’d love to see it converted into a feature film, because I think these characters are so refreshing. They may be 40-years old, but they’re not stale. One more point is it’s a funny film, and it’s been so rewarding to sit in these theaters at festivals and hear the uproarious laughter. Someone standing outside would think it’s a Steve Martin comedy. We worked on this with a small group of people for years, to see 500 people getting every joke…the humor’s there because Vidal and Buckley are so witty, and people laugh at the Howard K. Smith character, because it’s shocking how he turns them loose, where as today the moderators are so full of ego, they're the ones who want to be on camera.