Director Alan Taylor and writers Laeta Kalogridis and Patrick Lussier had a lot to juggle when they went to work on Terminator Genisys. With the four previous Terminator films and their corkscrewing stories, the filmmakers had to find a way to honor the universe the franchise has already built while setting off on their own, singular path. At what part of the saga of man's battle with machines would they pick up, when the travails of Sarah and John Connor and the Terminators sent to both destroy and protect them have been so thoroughly intertwined over the course of those four films, the first of which premiered 31-years ago?

Let's go back to the beginning; James Cameron's The Terminator debuted on October 26, in 1984, the same year in his film that a cyborg arrived from the future to kill Sarah Connor. Several components of the franchise were set in Cameron's classic original—the future is bleak, Sarah Connor is a bad ass, and her eventual son will lead a rebellion against the machines. The resourceful Sarah Connor was memorably played by Linda Hamilton (Cameron's ex-wife, no less), and her would-be assassin was played, of course, by future California governor Arnold Schwarzenegger. The script was lean, the dialogue was memorable, and the effects, while retrospectively modest compared to Cameron's later work, including Aliens, made just two years later, were impactful. The Terminator was a kind of sci-fi LA noir unlike anything that had come before.

Then came Terminator 2: Judgement Day. For two years after it's release on July 3rd, 1991, Cameron's followup was the high water mark for computer generated effects (until Jurassic Park came along in 1993 and re-set the bar even higher), which would have probably been enough to have made it a hit, but Judgement Day also had a phenomenal script. Now, the Terminator that had been sent to kill Sarah Connor is her ally—when Schwarzenegger's former cyborg assassin goes to free her from the mental institution she's in, she assume's he's there to kill her, kicking off one of the great escape scenes in film history—and her new foe is a T-1000, a liquid metal assassin that makes Schwarzenegger's T-800 look like a jalopy by comparison.

These first two films in the franchise were tight, impactful and memorable, so it makes sense that these were the films that Taylor, Kalogridis and Lussier built their story from.

“Time travel is embedded in the DNA of the material, which gives rise to the possibility of alternate universes and different timelines without affecting the original material at all," Kalogridis said. "Those stories exist and continue to exist, they still have happened, but you can tell a different story that branches off in a different direction using the characters that all of us love.”

One of the first things the filmmakers had to contend with is how drastically the world has changed since Cameron's original film. When theTerminator first touched down in Los Angeles, it was at the height of the Cold War, and the nefarious Skynet Corporation was an operation that was struggling to control, subjugate and eventually destroy human life. Now, with the advancement in artificial intelligence, the globalizing nature of the internet and the advent of social media, the filmmakers noted that Skynet no longer has to struggle to track humans. "We're actually lining ourselves up and giving away our privacy, our freedoms, our information," said producer David Ellison. "We're standing in line for the latest in technology and software." For a population that has no problem allowing countless people watch them on apps like Periscope, the filmmakers had to envision a Terminator that made sense in a changed society.

So how did they use the timelines and narratives from Cameron's first two Terminator films while keeping an eye on the world we live in now? They decided to open Genisys with the final assault by the remaining humans on the machines, led by John Connor and Kyle Reese. This comes after the machines had seized control of the missile defense systems and killed three-billion people in what was referred to as Judgement Day. Right here, you see your first deviation from the Cameron era—in Terminator 2: Judgement Day, Schwarzenegger's Terminator has defeated the T-1000 and saved the planet, but in the Genisys timeline, that hasn't happened.

In Genisys, the remaining humans believing they've conquered Skynet, only you can never really defeat Skynet, it seems, you can only hope to contain it. This is when Skynet launches a "tactical time displacement weapon," sending a Terminator back in time to kill Sarah Connor before she can give birth to John. This, then, brings us back to 1984 Los Angeles and the original Terminator, only now Genisys takes us into a totally new direction.

The 1984 LA that Genisys shows is one that has been altered, using the conceit that Terminator and Terminator 2: Judgement Day were films set in the present, not the future or the past. Because Genisys travels back and forth through time, the filmmakers allowed themselves the flexibility to arrive at an altered 1984, and then, travel forward (but still in the past for the characters) to 2017 in attempt to stop Judgement Day from ever happening.

Producer Dana Goldberg has said that the Genisys team wanted to honor the characters Gale [Anne Hurd] and James Cameron created, but to move confidently in a new direction. "So we finally arrived at the place of whatever timeline you’re talking about, when you’re talking about the Terminator world, there’s always going to be a Sarah Connor, a Kyle Reese, a John Connor, a Terminator—they just might not be the identical people they were in the prior films. That’s the attitude we started and stayed with going into the development of the script. They are all here…just not exactly the people that have been represented in films previously.”

The filmmakers are looking at Terminator Genisys less as the fifth film in the franchise than as a stand alone film that honors the past without feeling too beholden to it. "Unlike other sequels this felt like a whole new ballgame and I wanted to see how we could pull that off," Taylor said in the press notes. He's helped by the fact that Sarah Connor is played by no other than Daenerys Targaryen herself, Emilia Clarke, and the return of Schwarzenegger in the role that made him famous. The current film opens 45 years after the Schwarzenegger's Terminator first made contact with Sarah Connor in Los Angeles, in 2029. 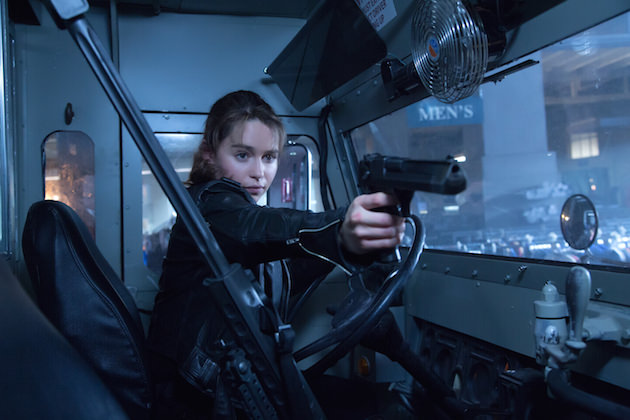 “Alan manages to get a beautiful marriage of old meets new, but also puts a very sensitive, intelligent spin on it," Clarke said. "I think one of his goals with this movie is to ask what it is to be truly free as a human being, and the choices these characters have to make in deciding that. I think we are paying a lot of respect to the Terminator that has been be-­‐‑ fore, and bringing it to this new audience today.”

The very best of the Terminator franchise has always been the dysfunctional family story at it's heart; the strong mother, the son with the loaded destiny, and the paternal Terminator figure, sometimes evil, sometimes protective, that grounds all the science fiction elements into something worth caring about.

For users of the traffic and directions app Waze, a familiar voice will be navigating them to and fro starting today. USA Today's Bryan Alexander reports that Arnold Scwharzenegger will be the voice on the app, telling drivers: 'I'm a Terminator Cyberdyne Systems Model 101, and you're coming with me.' The Terminator Genisys start is promoting the film, which is opening July 1.