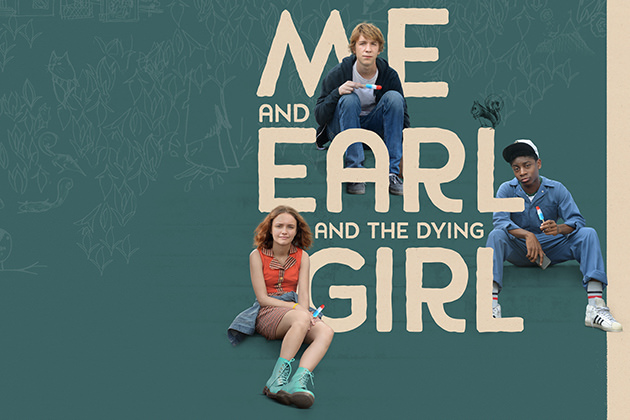 A Look at the Career of Brian Eno, Me and Earl and The Dying Girl‘s Composer

Tell me about a new Brian Eno record – one he recorded, wrote and/or produced – and yeah, I’ll hear it. What, he made a mobile app? Hold the phone. He has a new art installation? Take me. A deck of cards? A published diary?

This week another Eno project arrives in the form of an indie film score. Me and Earl and the Dying Girl, a comedy-drama based on Jesse Andrews’ YA novel, received universal raves when it premiered at Sundance this year (read our interview with director Alfonso Gomez-Rejon about that experience here). It stars Thomas Mann as a high schooler who spends his time making low-budget movies and hanging out with a girl (Olivia Cooke) who has leukemia.

Critics have already called Eno’s score “breathtakingly perfect” and “one of the many aces up the movie’s sleeve.” That doesn’t surprise me; Eno knows how to capture emotion without sounding cliché or overly sentimental.  You can listen to a bit of on the film's website here.

And though it’s not what he’s most commonly associated with, Eno has been scoring movies for about 40 years. Before you catch Earl – the cast also includes Nick Offerman, Connie Britton and Molly Shannon – add a few more of Eno’s cinematic works to your must-watch list:

The ‘70s: Daring and experimental

After he broke from Roxy Music in the early ‘70s, Eno’s creative output exploded. Solo albums like Here Come the Warm Jets and Another Green World are now considered classics, and they paved the way for generations of ambient musicians.

Film-wise, Eno scored a handful of movies during this decade, including two works from experimental director Derek Jarman, Sebastiane (1976) and Jubilee (1978). Jubilee went on to become a cult favorite, presenting an electric blend of punk rock, politics and philosophy.

Watch it now (on Hulu via the Criterion Collection), and see if you can pick out Adam Ant, Siouxsie Sioux, Jayne County and all the other musicians who appear:

It’s worth noting that Eno also scored Land of the Minotaur (1976), a bizarre and unsettling horror film starring Donald Pleasance and Peter Cushing. The music is made up of whistles, hums, bended notes and other sounds that may seem simple on the surface. When presented as a whole, however, they’re absolutely terrifying.

As Eno continued to work as a producer for U2, Talking Heads, John Cale and others, he contributed to several films that reflected his otherworldly, minimalist aesthetic. One of those was Al Reinert’s acclaimed 1989 documentary about astronauts who traveled to the moon, For All Mankind. The movie’s arresting images are brilliantly matched by Eno’s tracks.

You can also see this one on Hulu, via Criterion:

Some of Eno’s For All Mankind score can be heard on his 1983 record Apollo: Atmospheres and Soundtracks as well as Music for Films III (1988).

Additionally, Eno scored Opera, the 1987 film from horror master Dario Argento. If you’re in the mood for blood spatter and opera singers, you can rent it tonight from iTunes, Amazon or what have you, just check here on WhereToWatch.

The ‘90s: Fantasy on the fringe

Though his classic songs appeared all over the big screen in the ‘90s (Trainspotting, Velvet Goldmine and Heat made ample use of them), Eno didn’t score as many films during the 1990s, devoting much of his time to working as a solo artist, producer and for-hire composer. (Fun fact: He created the startup sound for Windows 95.)

Eno did score Neverwhere (1996), a fantasy TV miniseries created by Neil Gaiman. Not surprisingly, the story takes place in a land beyond Earth. In the clip below, you can hear some of his ambient sounds in a scene featuring Peter Capaldi (Doctor Who) and Laura Fraser (Lydia from Breaking Bad). If you want more, all six episodes are on Hulu.

In the last 15 years Eno has scored an array of documentaries, shorts and more mainstream films. Perhaps the one that received the most attention was Peter Jackson’s adaptation of The Lovely Bones (2009), a story that demanded an ambient soundtrack if there ever was one:

Eno also scored The Jacket (2005), the surreal thriller starring Adrien Brody and Keira Knightley. Though it had a sizable budget, it likely won’t stand the test of time like Jubilee or For All Mankind:

Eno’s music adds an unsettling layer to the philosophical doc The Pervert’s Guide to Cinema (2006):

And the same can be said for his atmospheric compositions heard in thrillers Fear X (2003), Buddy Boy (2000) and the low-budget Nightingale in a Music Box (2002):

And though I’m focusing on his scores for other filmmakers, I should mention Eno has experimented with film and video for years. His acclaimed “video paintings” explore light, randomized images and generative software, and his 77 Million Paintings has been exhibited worldwide.

At first glance, Me and Earl and the Dying Girl contrasts with many films Eno has scored since the ‘70s: It’s not a thriller or an ethereal fantasy. It makes no grand political statements. It takes place here on Earth.

However, the movie does tell a conventional-sounding story using unconventional means. Its main character, Greg, finds happiness and forges connections through art.

Considering that’s what Eno has done since the beginning of his career, it sounds like a perfect match.