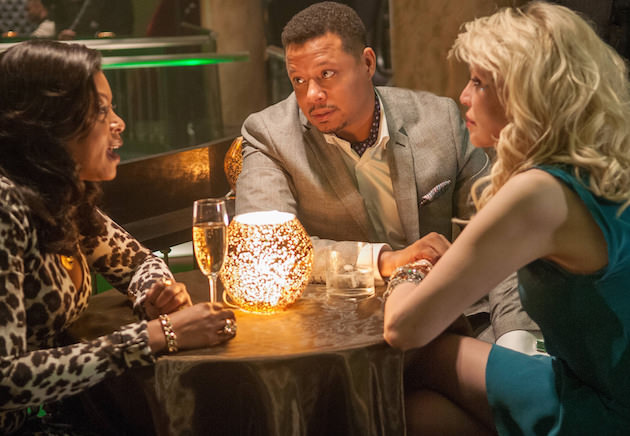 Yesterday we published our interview with Empire composer Fil Eisler, and today we're going to take a look at two scenes Eisler chose as his favorite illustrations of what he brings to the show. Thanks to 20th Century Fox, who were kind enough to send us these clips.

Let's go through a few of your favorite scenes that you scored last season.

There’s a couple of scenes that I could use to illustrate the extremes of what the music can do. For instance, there’s a sence in penultimate episode when Luscious sees, or maybe doesn’t see, Bunkie’s ghost come back to him. It’s a very short King Lear thing. Bunkie appears at the end of Luscious's bed, and the way we went about scoring it was to have the scene keep coming in and out of music. There’s a song called "Power of the Empire," which starts the scene, but then gives way to a score made up of dissonant strings. If you were to play that concept music to people out of context, it’s just this incredibly dissonant sound, but in the right context, you totally buy it, and you don’t even notice it’s there. It just brings this unease and weirdness to the scene. We have all these melodic themes in the show, and in this scene, suddenly you have that theme twisted inside out. When you see Bunkie, you hear it come cascading in, then it disappears. We were recording it at the Fox recording stage, and people were mesmerized by this polytonal, bizarre sound. You’ve got a cello playing in one key and the harmony in a completely different key, then you put it in the scene and it’s so completely disturbing.

By contrast, there’s a moment in episode eight that happens during a Cookie flashback. She's singing ‘You’re so Beautiful,’ then a piece of music goes under it and takes you out of that cell, down the prison corridor, to the end of the show. That was a really good example of collaborating with co-creator/writer Danny Strong, who took a piece of music I’d written for the pilot and placed it there. So I just rearranged it and recorded it, and you notice it there because the music leads you to the end of the show. You want that emotion to propel you to the end of the story. And by complete coincidence, Taraji was singing in the right key. It was totally an accident. It’s so exciting when something like that happens, when there’s an immediate symbiosis between story and music. When those two things click you all know it. That’s the beautiful thing about Empire—Lee [Daniels], Danny and Ilene [Chaiken] have surrounded themselves with people who see eye to eye and respect each other’s ability and talent.

Empire, Episode 108: Cookie Loves Her Family from The Credits on Vimeo.