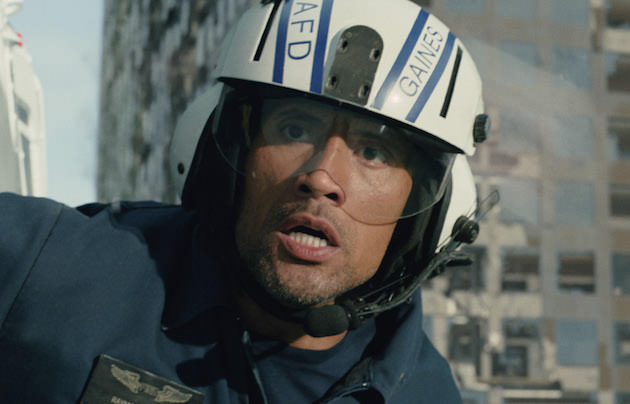 Warner Bros. released a third trailer for their big screen action-thriller San Andreas, opening in 3D and 2D theaters on Friday, May 29. The basic storyline revealed in this 2:34 minute sneak peak is an orderly timeline of events which ends abruptly with a cataclysmic earthquake centered in the eponymous fault – then order and time are replaced by chaos and destruction.

The graphic scenes of destruction, first of Los Angeles and then of San Francisco, are suitably impressive and harrowing; buildings collapsing, people fleeing, and a colossal wave moving down San Francisco Bay, heading towards the Golden Gate Bridge.

While gonzo, city-destroying CGI is certainly expected for a film called San Andreas, what makes this trailer standout is the sound. It isn’t a driving hard rock score, but rather ragged breathing, an eerie kind of chiming tinnitus sound, and perhaps creepiest of all, silence. These choices make the eventual sound of the impact of a building collapsing all the more terrifying. This choice drives home the reality that natural disasters, even those trumped up for the big screen, are highly personal, not amusement rides. It is the human/family drama of Dwayne Johnson’s character (he’s a rescue helicopter pilot whose wife and daughter are caught in the mayhem of the magnitude 9 earthquake) that differentiates this trailer from others in its genre.

If this film is as engaging as its trailer, San Andreas will certainly shake-up audiences most by stirring emotions.