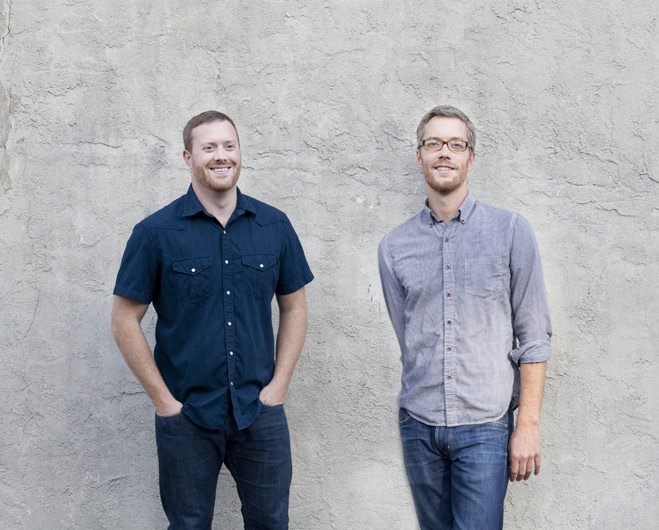 Learn About Modern Film Composing With the Blair Brothers

On May 20, from 8:00am to 3:00pm, the film channel CreativeLive will unveil it's newest course in its' ongoing online global classroom for creatives; "Modern Film Composing," hosted by Will and Brooke Blair. The Blair Brothers will be coming off their latest premiere, Green Room, their second collaboration with writer/director Jeremy Saulnier after the outstanding Blue Ruin, which premiered at Sundance in 2014.

The Blair Brothers have worked in a variety of mediums. Along with their film work, they've applied their musical talents to TV, documentaries and web series. For their class, they'll focus on helping filmmakers and composers alike create a top notch score within each project's budget, how to work through creative differences, and how to find the balance in tone and style. There's also a major bonus: CreativeLive students will be able to submit their films to be scored by the Blair Brothers, with one project scored live during the session and one scored prior to the taping.

For rules and regulations and for students to submit, they must register here. The deadline for submissions is May 14.

We spoke with Will Blair about his work with CreativeLive, composing and more.

How did you get involved with CreativeLive?

The CreativeLive platform caught my eye over a year ago. I was always staying atuned to what they were doing, and then they reached out to us about the idea of teaching a workshop. They’re letting us do our thing, and encouraging us to have our own take on how to go about it, but they’ve also been hands on in getting the course together, organizing our experience and thoughts into “teachable” moments.

Is it going to be like a proper classroom situation, where you and your brother are at the front of the class explaining how you do what you do?

The main thing, and our only thought up front, was as far as composing music for film, there seems to be no one way to do it. We're just doing it our way, we’re not experts at this. We’ve got tons to learn ourselves, but we are right in the middle of it, creatively and business wise. We just didnt want to over promise that we’re experts—we wanted to make it more of an exploration with people. We’ll show you what we’ve done, what works and what doesn’t work, and we'll wrap our heads around this together.

Will you use Blue Ruin as an example? That film absolutely floored me at Sundance.

We're definitely going to use Blue Ruin to highlight a few examples of what we do. In that film, Jeremy (Saulnier) trusted us, but also felt comfortable really hitting home what the film needs and what the film doesn’t need. He worked with us from each scene, frame to frame, on what he was trying to accomplish. Jeremy's very hands on, with the sound department, the color department, the special effects department—he let us go with what we thought worked, but he really steered the ship, and in that, that was our second feature film we scored, and we learned so much more.

What's your goal for this class?

We’re trying to get as nitty gritty as we can in the workshop. The largest chunk of the workshop will be hands on live scoring with two short films. The folks at Creative Live are sourcing the films as we speak through a submissions contest. One of which we’ll score before he head out there, and one we’ll score on the fly in the studio in front of a studio audience. They’re setting up a version of the studio that we have at home, there’s going to be an experimental nature to the whole thing. Scoring takes a lot of time, so we’re trying to condense that into something that’s viewable.

You guys are the rare composing pair—how does that inform your work?

It is unique that we’re a pair, and what it means is we really dig into every single scene, and every single note, together, and discuss it quite a bit. I don’t know if it’s an advantage or if it slows us down, but we trust each other and we’re open with what we think of each other’s ideas. We’re there to bounce feedback off each other immediately. A lot of composers traditionally work in a solitary environment. This is something we can discuss and share with a group of students. We’re used to bouncing ideas back and forth. We’ll also touch upon the philosophical aspects of scoring.

What are the philosophical aspects of scoring?

What we keep coming back to is that with any big, collaborative project, fear is the quickest thing that throws you off your game and convinces you that you might not be able to do it. In a broader sense, we’ll touch upon these aspects.

What you can tell us about your upcoming film Green Room?

It's another film with Jeremy Sauliner—he actually pitched the idea while we were at Sundance, he’d just had this idea he really wanted to make happen. So he wrote it, it’s in the vein of Blue Ruin, it’s kind of amped up, the action, the special effects, the size of the cast, it’s a bigger version. It centers around a young punk rock band, and you follow this well intentioned band touring the country in this van, only they play a show at the wrong venue and the wrong time, which is run and led by a tight-knit gang of white supremacists, led by Patrick Stewart.

It was really fun to watch the casting of the film, we got to see this unfold from his vision to the final cut. These guys in the band witness something they shouldn’t have seen, and then it’s a survival tale, a fight for your life tale. Jeremy and my oldest brother grew up making these films together, we watched them develop their love for fake blood, and they’re still doing it, so they’re staying true to what they love, but Jeremy has said he’s gotten this gore and blood out of his system.

What inspired you and your brother to become composers?

We were constantly searching out new folks we’ve never heard of and see how they worked music against picture. I think it’s something we noticed when were quite young—a few key moments, Star Wars and John Williams, of course, which led us to Indiana Jones and E.T., I think we were lost in the story but aware that music is playing a huge part of this. We had a copy of the soundtrack and hummed the tunes, and we realized it was another character in the film. As we got a little older and started exploring music ourselves, we were young teenagers, Twin Peaks and David Lynch’s exclusive composer Angelo Badalamenti…

That was the first time we noticed music was such a part of the mood, but it wasn’t this big orchestral approach, but rather this stripped down, minimal, almost jazzy, experimental thing that he was doing, and was such a huge part of what made Twin Peaks so unsettling. We realized music in film could be done in so many different ways. I think recently there’s a film called Ain’t Them Bodies Saints, we’ve become buddies with the composer Daniel Hart, and that’s a perfect example of a modern, well done score. He’s a great violin player, it’s not over produced in an orchestral way, it fits the size of the film in an intimate way, there’s a lonesome trumpet every now and then. In liu of big Hollywood percussion, there’s hand claps and thigh slaps and drumming in a very primal way. It’s a beautiful film and we think the score is perfect.