Karl Bushby Attempts 36,000 Mile Trek in The Walk Around the World

Karl Bushby had two rules when he set out to walk an unbroken path around the world: No form of transport to advance, and he couldn’t go home, to Hull, England, until he arrived on foot.

He made this pact with himself nearly two decades ago, and Bushby's still walking. He's walked across 25 countries, over seven mountain ranges, from the southern tip of Argentina up through South and Central America, North America to Alaska, across the Bering strait (the first person ever to walk the strait from east to west), and into Russia—where he ran into some problems. He was deported from Russia and issued a five-year Visa banned, potentially crushing his dream and invalidating a mission that had cost him dearly. After 15-years and 18,000 miles, his journey appeared to be over. 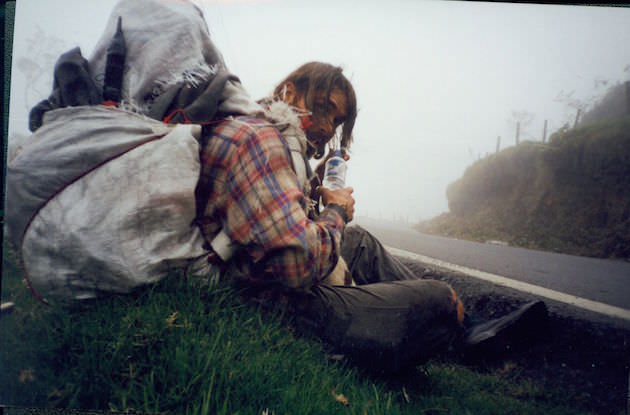 So, Bushby walked 3,600 miles in the wrong direction, from Los Angeles to the Russian embassy in D.C., in the hopes that the Russians would note his effort and overturn the visa ban. The surreal journey was Americanized to the nth degree when Bushby got to Las Vegas, where his image was projected on Caesar’s Palace huge outdoor screen, and he was greeted by former Lifestyles of the Rich and Famous host, and current reporter, Robin Leech. He was put in the Palace to rest before moving on.

How much has Bushby sacrificed? He's only seen his father and his son twice in the last 15-years. This Friday night, you can watch the former British Army paratrooper's journey across the country to convince Russian embassy authorities to overturn the visa ban and allow him back into Russia, so he can complete his record-setting, 36,000-mile walk around the world. He's the subject (and the cinematographer) of National Geographic's The Walk Around the World, which airs on Friday, May 15, at 9/8c on the National Geographic Channel. We spoke to the director, Jordan Tappis, about what it was like to work with Bushby, what his role was in getting this footage together, and what he sees in Bushby's future.

What drew you to this story?

My now partner, but then friend, Beau Willimon called me in 2011 from a bookstore in London and said “You’re never going to believe this story I found about this guy Karl Bushby who’s spent years of his life walking around the world." Beau’s and I are adventure junkies, so he knew immediately it would be something I’d gravitate towards.

At what point of Karl's journey did you get involved?

At that point Karl was in Melaque, Mexico. In Siberia, you have these small weather dependent windows to traverse the tundra, so while Karl was waiting for the tundra to freeze, he’d go back to Melaque because it was cheap and he has friends there.

The most central question is why is Karl doing this?

That's teh 36,000 mile question. The scale of Karl's journey unlike anytnig I’ve ever experienced, in terms of courage and determination, sacrifice and geography, it’s enormous on every level. The big question for me has always been, why? Why are you willing to sacrifice everything, your family, your body, your youth—all the symbols of a normal life? What I've learned about Karl is that "why" is an evolving answer, and there’s no one reason why. At its core, he set out to accomplish something that had never been done before, and he’s the type of guy who won’t stop until he accomplishes his mission. At this point, he’s so wrapped up in this odyssey, he is this expedition. He has a family, a brother, parents, a son, an ex-wife, real things that are pulling at him, and he communicates with them all very regularly, but he can’t go back to England until he arrives there on foot. Period. Until then, the only time he gets to see them is when they come to him. It's really difficult to wrap your brain around the reasons for the expedition, because there are so many of them. We explore that question extensively throughout the film and in many ways, it was that very question that drew me to Karl's story in the first place. 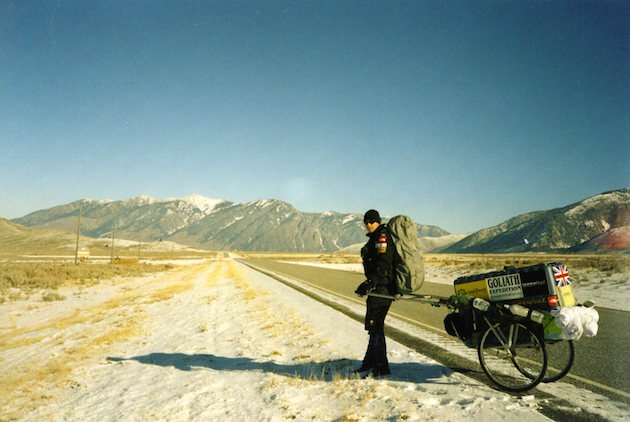 Did you ever sense any regret in him?

I sensed a fair amount of self reflection throughout my time with Karl, but I wouldn't call it regret. Karl has never once contemplated scrapping the mission. That was never in the cards. When he thinks about the wreckage of his past, it’s not should I or shouldn’t’ I have—there’s no vacillation for Karl. But the fallout from this thing is real. And it’s something he has to contend with every single day. He wasn’t there for much of his son’s life.

Aside from the glory of it, of doing something no one's ever done before, are there other reasons he embarked on this now nearly two decade journey?

As a dyslexic former paratropper from in Hull, England, without a college degree, Karl knew the opportunities in front of him weren’t the same as for say, someone growing up in New York or Los Angeles, but he wanted to do something extraordinary with his life. He had to complete this mission, otherwise it was this giant sacrifice for nothing. At this point his motivation for completing this mission is in many ways more for his family then for himself, so that their sacrifice was for something. The dark side, if you dwell on the things you’ve missed and the pain you’ve caused by leaving, it’s not a constructive way of looking at it. In zero sums terms, it’s hard to rationalize. But it’s much more complex than that. 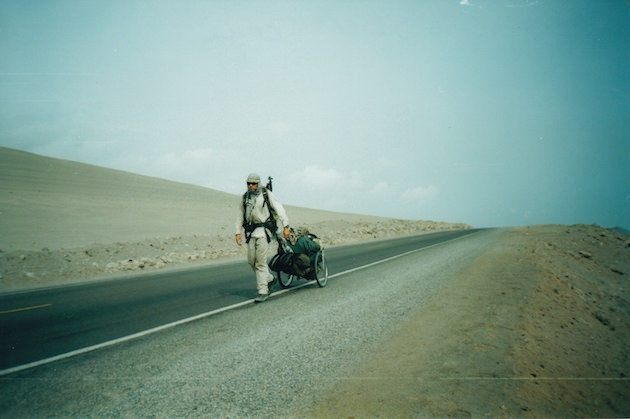 What about the boredom of what he's doing?

It can be incredibly boring. The few times we were out there, which wasn’t that often because most of the time he was alone, self-documenting, but when we came out he seemed relieved to see us. But don’t forget, he’s constantly meeting up with people. In the Mojave desert, he’s all by himself, but when he’s walking through population centers, he’s regularly meeting up with other people.

What are some of Karl's methods for dealing with those excruciatingly long stretches where it's just him and the road?

Karl’s a big thinker, and he goes into these different modes, these meditative states. I don’t think he’s practiced meditation, but that's sort of what he’s doing. He also listens to music and books. Those books are always on science and math and space exploration. For so many years he’s been focused on the technological aspect of this walk; how do you find fuel in the Siberian tundra to power up your camera or phone or beacon? During those years of research, he’s gotten very into the technological side of the expedition, which has turned him to science and math. He was able to create a battery pack for his camera in the tundra by rigging a different kind of renewable energy pack on his camera so he could go days without losing charges. 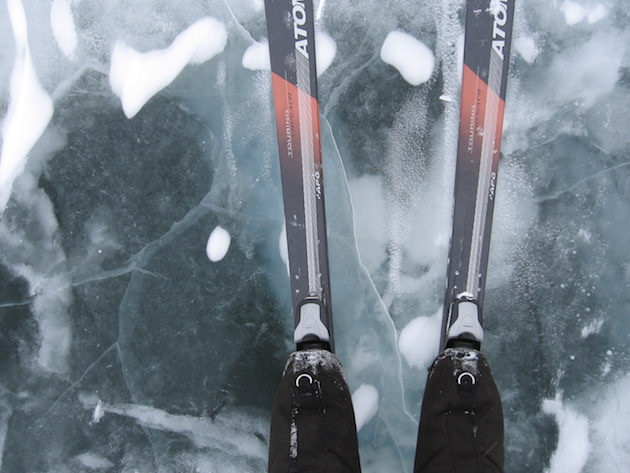 What about the physical wear and tear on him?

First of all, throughout my life I’ve experienced a few people who are physical freaks of nature, like Kelly Slater, the best surfer in the world—there is something about his body that makes him able to do things others cannot. Karl has some version of that. His body enables him to endure painful, monotonous walking without stopping. His son couldn’t do for more than a few days. But for Karl, he is a particularly durable person. With that said, this expedition has taken a toll on his body. He has increasingly bad knees, ankles, and he's obviously getting older. We’ve talked more recently to a scientist at MIT about the recent advancement of exo-skeleton technology as a way to combat some of the injuries, but Karl ultimately decided that exploring exo-suits at this juncture would be a violation of the tenets of his journey; no mechanized help whatsoever in advancing. So that idea, for now, went out the window. 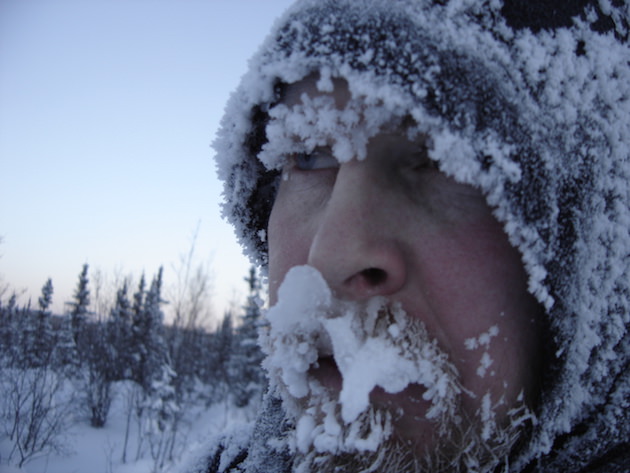 Tell me about your crew

We had zero crew, with the exception of a couple of days in DC and LA, going to the Russian embassy, and shooting him leaving the pier in LA, it’s all Karl. He carries an arsenal of cameras.When his son was out there, Karl handed over the camera to him. Aside from that, virtually every frame in the film was shot by Karl. Over the years he’s become a really good cinematographer. But we worked with him every single day to make sure we were getting what we needed, like giving us a confessional at the end of the day, recording every phone call, making sure that he shot every meeting he had. We had very specific shot list that he needed to adhere to.

How much footage did you get?

We were looking at footage as it was coming in, every other week or so we would get a bushel of media cards, so we were cutting the whole time, Chris Amos, our editor, and our producer Zachary Guglin, have been on this project from the very beginning. Zach dealt with the ground support for Karl and was his main point of contact. By the time the trek across America was done, the film was nearly finished. 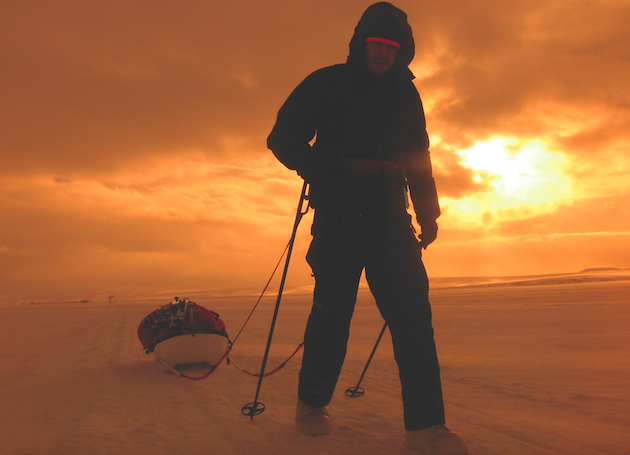 As someone who got direct access to Karl, what can you tell us about him and this journey that we might not pick up on?

When he’s done, this will be a 36,000 mile walk. The longest unbroken footpath in human history. Karl's been through hell and back, he’s traversed the most militarized part of North America, the Darien Gap, was the first person in history to cross the Bering Strait from east to west, he's crossed the Siberian tundra, and yet, he’s only half way done. He now has to deal with greater Russia, and China, and, depending on the route, Kazikstan, Iran, Iraq and Turkey. All this before he sets foot on European soil. This expedition—17 years in—is in many ways is kind of just getting started. He’ll probably get through the next half quicker, but he’s got a long to hoe and we'll be with him until the very end.

And what about Karl himself?

The enduring quality that I love so much about Karl is he has a deep belief on the goodness of people. He deeply believes that 99.99% of people on this planet are decent people. When it comes down to it, he’s walking into places, meeting people, shaking their hands, and most of the time, almost all of the time, he's encountered kindness and generosity. The people he’s met along the way, that is the expedition. Thanks to social media, he’s able to stay connected with so many of these people who helped him along the way. In many ways, they've become the wind at his back. It's a beautiful thing.