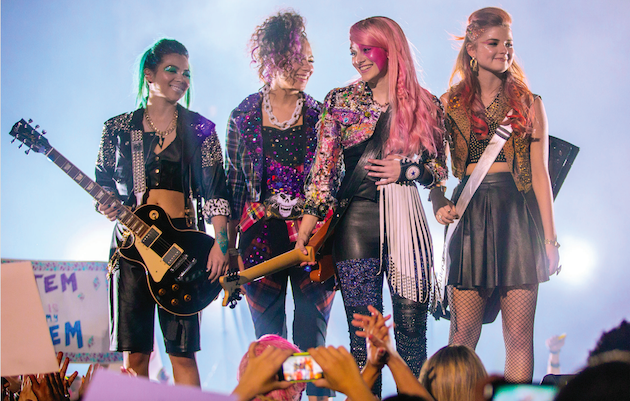 Fans of the cartoon television series Jem and the Holograms – the girls are back, and coming to the big screen as a live-action reboot. Universal Pictures just released the trailer for what will certainly be a sensation for today’s young movie goers, as well as a dose of nostalgia for devotees of the original ‘80s series.

If you don’t remember who Jem is, don’t worry; this trailer is all about bringing you up to speed on this updated version of the one and only.  In the big screen version, Jerrica Benton (Aubrey Peebles), the film’s protagonist, forms a band with her sister and cousins: Kimber (Stefanie Scott), Shana (Aurora Perrineau), Aja (Hayley Kiyoko) and Rio (Ryan Guzman). After a video of the girls goes viral, Jerrica, along with her band, is re-packaged, with Jerrica becoming the alter-ego/lead-singer “Jem.” The trailer emphasizes that this movie is about more than just catchy tunes and wild hair.  The major theme of the trailer is Jerrica struggling to take back her identity and find her own voice.

For older Jem fans, a real sweet spot, in addition to the memories, is the evil record executive played by Juliette Lewis. She is a real defining part of this trailer.

This teaser is just that – they are not leaking what we suspect will be a great soundtrack, just a few little snippets from the girls and some boy band music. Perhaps we will hear more in future trailers.

You are just gonna have to wait to scream the iconic Jem and the Holograms’ catchphrase “Showtime Synergy”! This film is set to premiere on October 23, 2015.

TAGSFront of the Book Jen and the Holograms Universal Pictures