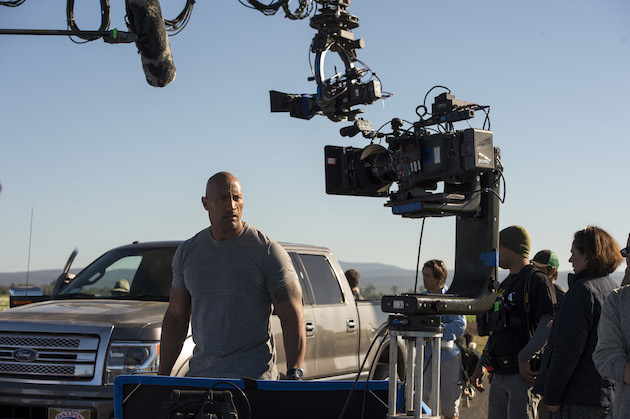 How’d They Film That? Inside the Fault Lines on San Andreas

When your film is about the San Andreas fault giving way and a magnitude 9-plus earthquake turning California into so many dominoes and sinkholes, decimating cities and their historic landmarks, you’re going to need some serious CGI. Yet you’d be surprised how much of San Andreas was shot in camera, using practical stunts and a lot of old fashioned movie magic (and a whole lot of chutzpah from the stunt professionals). The film may be about a natural disaster, but it's creation was a precise dance between practical effects, special effects, and visual effects.

It’s interesting that many of today’s current crop of directors who make massive films that rely on CGI, including Christopher Nolan, J.J. Abrams, Joss Whedon and for San Andreas, Brad Peyton, try to work in as many practical effects as possible. This has something to do with the films that they grew up on—Indiana Jones, Jaws, and Star Wars to name a few—all of which utilized practical effects to great, well, effect.

San Andreas centers on Ray (Dwayne Johnson), a search and rescue pilot who, along with his estranged wife Emma (Carla Gugino), must make their way from Los Angeles to San Francisco to save their only daughter. Between point A and point B lies a state that's more or less falling into the sea.

“I think there were maybe three days when we were walking around on solid ground,” Peyton recounts in the press notes. “If we weren’t in the water, we were on a boat gimbal or a helicopter gimbal. For a week, I was shooting a boat on a green screen stage, doing all these stunts with water flying around; then it was a helicopter for another week; then a plane. It was pretty wild.”

To get a sense of just how complicated this film's production was, we'll let the filmmakers walk us through a single scene and break it down for us.

At the outset of the movie, Ray needs to save Emma, who was eating at a fancy restaurant in an upper story of a high-rise in downtown Los Angeles when the quake hits. This sequence, which looks chaotic and messy as one would expect during an earthquake, was created with a series of highly precise interlocking movements and effects overseen by several departments.

The first thing to note is this high-rise itself doesn't exist. It was created by the filmmakers, with production designer Barry Chusid dreaming up the restaurant's interior, an elegant space with ponds, potted trees, chandeliers, columns and a honey-onxy bar. To infuse this scene with as much realistic panic and mayhem as possible, Peyton had Chusid design this space around traffic patterns he had mapped out with special effects supervisor Brian Cox and stunt coordinator Allan Poppleton.

The entire scene is delivered in a continuous sweep, beginning with Emma's point of view: she awakes, stunned, barely able to hear anything, trying to make sense of where she is and what she's seeing. Once she realizes what's happened, it's about her struggle to get out of the crumbling restaurant, up the stairs and to the roof, where Ray's chopper is waiting. Once on the roof, she's met with shifting and crumbling slabs of concrete, exposing gaping holes and sheer drops-offs. During all of this, the building is collapsing in on itself.

"We call it the pancake rig; it’s like a big pancake she was on that let her fall what looks like four floors down before she makes her way back up to the roof,” Poppleton said in the press notes.

“The Steadicam operator and I were joined as one for a couple of days, following Emma all the way up in one extraordinary shot,” said Gugino. “I do a lot of theater and there’s something about feeling like you’re on a tightrope, where you can’t jump off and you just have to keep going. With that comes a huge amount of adrenalin and focus, and I think that created the perfect energy for this sequence. It was very intuitive of Brad to do it that way.”

SFX coordinator Cox said that the entire sequence was one incredibly complex cueing process, where one action leads to another, then another. The scene begins subtly, with the tremor of a water glass and a knife tapping a tabletop, giving way to cracking walls and a broken gas line that starts an inferno in the kitchen. When you watch the trees and water ponds shaking backwards and forwards, they're actually rigged on a rail system so they can be moved this way and that. The tables and chairs were all moved individually, so the entire effect looks randomized.

Cox’s work was woven into the efforts of the VFX team, lead by Randy Starr, who helped breaking the scene into segments so each piece could be woven into the whole. When it comes to the digitally altered skyscrapers, Starr noted how most major cities are made up of dated, decades-old buildings built with different materials and modern, earthquake-resistant towers.  “Many of the downtown buildings are from different decades so there will likely be some that will collapse and others that are more modern and will sway," he said. "So we built all of that into the scene.” (see below at the 0:48 second mark)

And what about the shots of Ray in the helicopter? That action was all caught on a green-screen stage in what production designer Chusid called a "helicopter buck," which was built to replicate a Los Angeles Fire Department model and mounted on a gimbal. When Ray and Emma ride a speedboat through tsunami floodwaters, the gimbal was eventually repurposed to control it.

“There’s nothing with wings or wheels that I do not operate in this movie, and I even get to pilot a boat,” Dwayne Johnson said in the press notes. “Actors love to say they performed their own stunts. I have a great stuntman who’s been with me for years, but because we were shooting so much in- camera, without cutaways, I got to do a fair amount myself, like rappelling out of a helicopter.”

To learn how to credibly play a rescue helicopter pilot, Johnson and the actors playing members of his crew trained with CareFlight, a Queensland non-profit emergency-services helicopter company. CareFlight taught them the basics: procedures, instruments, equipment and how their team would function. CareFlight lent the production a Bell 412 helicopter and access to hangar as well.

“I spent a lot of time with helo pilots, trying to understand the mechanics of flying a helicopter and just getting into their heads a little bit,” Johnson says, “how they look at their job, what they think, and how they’re able to separate their emotions from the job, because it’s just human nature when something like this happens to go into that fight-or-flight mode. These guys are incredible warriors. Spending time with them was invaluable.”