Here’s How They Built the Beastly Machines for Mad Max: Fury Road

How do you fuse two Cadillac bodies together, install two huge engines, and actually make the thing not only drive, but serve as one of the main vehicles in a film that's essentially one long car chase? This was one of the many challenges facing Jacinta Leong, art director on Mad Max: Fury Road, one of the most kinetic, relentless action movies in years. Max goes gear for gear and wreck for wreck with Fast & Furious 7, and Leong was among the many crucial crew members who helped turn director George Miller's meticulously realized, sun-baked and water deprived future hell into reality.

The story in short is this; Max Rockatansky (Tom Hardy) is a former lawmen with serious PTSD and a preference for being alone. The film opens with Max's capture by the white-painted lunatics who serve Immortan Joe (Hugh Keays-Byrne, the man who played Toecutter in the original film). Joe's most famous servant, Furiosa (Charlize Theron, such a bad ass, see the end of this piece for more), is sent in a convoy with Joe's minions to fetch fuel, a prized mission that Nux (Nicholas Hoult) is desperate to join, and does so with Max lashed to a pole on the front of his car (pictured above), serving as his blood pump to keep Nux's energy up. Only it turns out Furiosa has other plans—she's saving a collection of beautiful young women, Joe's "wives," and taking them to the Green Place, the last remaining lush location on Earth. When Imortan Joe realizes he's been duped, he and his army of soldiers give chase in their "tricked-out nightmare doomcars," as Slate's Dan Kois so aptly put it, and the film is off and burning across the desert, one of the great extended chase scenes in cinematic history.

Over 150 real cars were used in George Miller's latest Max incarnation, creating a literally moving spectacle of vehicular mutation and mayhem. How'd they pull this off?  Jacinta Leong explains, providing us with a detailed account of her role in turning Miller's fever dream into a reality, and naming many of the other people whose brilliance was poured into this single, immensely satisfying chase film. 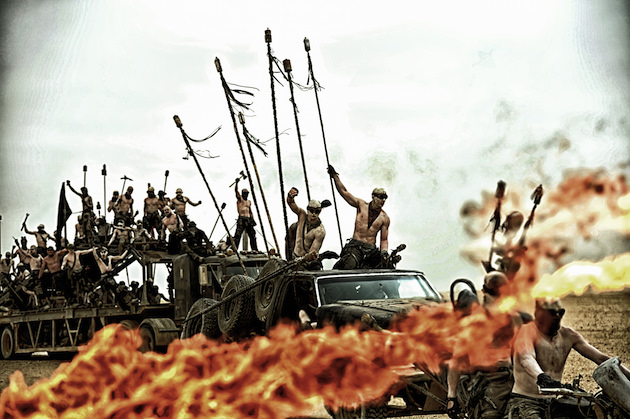 So how did you guys build these incredible vehicles?

The production designer on Mad Max: Fury Road – Colin Gibson – instructed me on specific vehicle and set requirements by providing me with his sketches and ideas. Supervising art director Charlie Revai also supplied me with information and his thoughts, such as logistics and creative decisions that he had developed.

If I wasn't at the computer drawing, I was in the workshop seeing the vehicles take shape, being test-driven, and completed with scenic finishes and decals.

What were some of the specific challenges you faced with the film?

A specific challenge designing the vehicles was achieving aesthetic qualities as well as functionality. Our vehicles had to look amazing, but beyond that, they also had to drive safely at speed!

I'll use a the GigaHorse for example. The Gigahorse was a stacked pair of Cadillac bodies, powered by a pair of Chevy 502 engines. So it obviously looked intimidating, but how did it actually drive? Engineer Antony Natoli and mechanic Mark McKinley designed a system so the two engines sat in a side by side arrangement and were connected to the transmission. I modelled the system in AutoCAD, and from this file, the plates and components were waterjet cut. 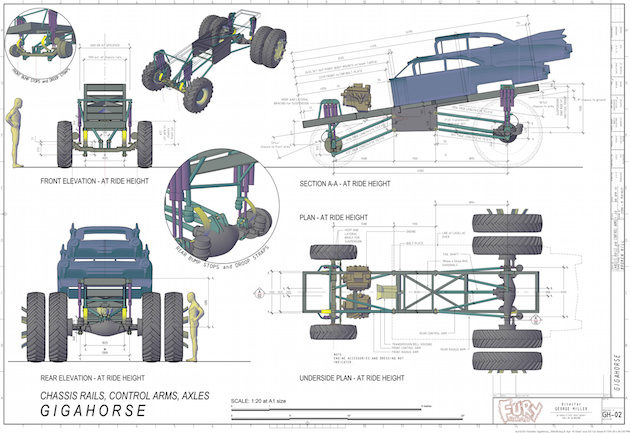 The GigaHorse's suspension was also a challenge. The chassis was built from scratch and all the components had to accurately function. The technical drawings I produced showed how the two engines connected to the bell housing transmission, then to the tail shaft and rear diff. The other parts included gear housing plates, control arms with rose joints, radius arms, shocks and bump stops.

I used 3DSMax to calculate and animate the extent of arm rotation…making sure the tires didn't interfere with the chassis. I have never worked on a film with so many hardcore vehicles, with such a raw, gritty original look, screaming through such unforgiving and harsh environments. 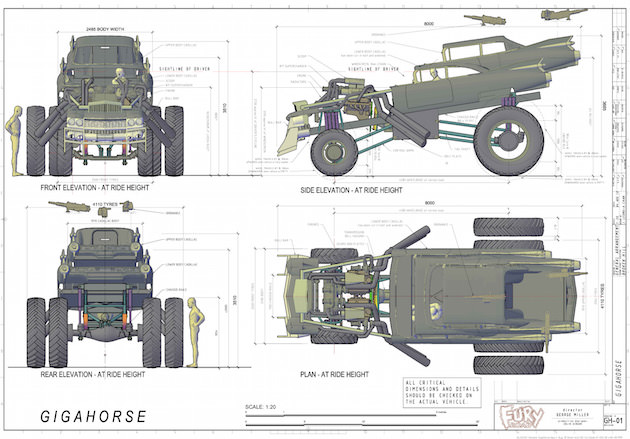 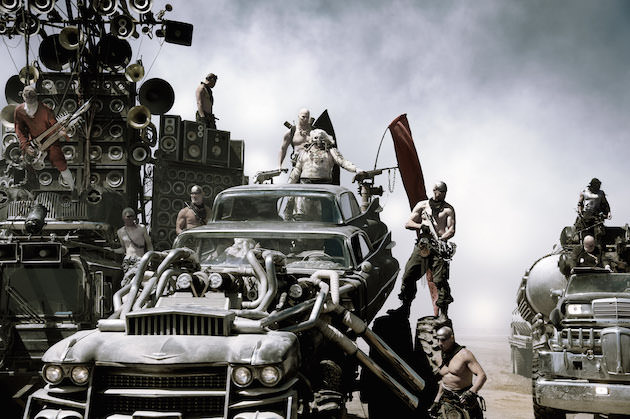 Mad Max has the sand-blasted, post-apocalyptic, leather-and-gearhead thing going for it in a major way. How did you go into your design work with this in mind?

Director George Miller has been directing, writing, living and breathing the Mad Max story for decades. His team had already produced storyboards and concepts of Fury Road. So he knew what film aesthetics he wanted to tell this story.

Colin Gibson's ideas flow at a blistering speed, whether he's designing sets and dressing, or sketching props or graphics. Fury Road takes place in a deteriorated social condition. His selection of materials for creating this world was "what would be left?" For example – how are the people governed? Are there commodities? How much water is left for people to drink, and when it is given to them, what containers are they using? What are the characters' belongings, according to their personalities? What do they eat? They are desperate people; how do they survive?

The vehicles had their functions too, which led to their forms. For example, the pole cat vehicles were used to pluck prey from moving vehicles. How do they work? They looked like analogue metronomes. This world looks believable, because all those questions were asked. Concept Illustrator Peter Pound had also been working on this project since the late 90's, so he had many ideas on the vehicles. Reference books, too, were an inspiration. Through the collective creativity of art, props, set decoration and vehicles, the design work culminated in finished vehicles, ready to film. 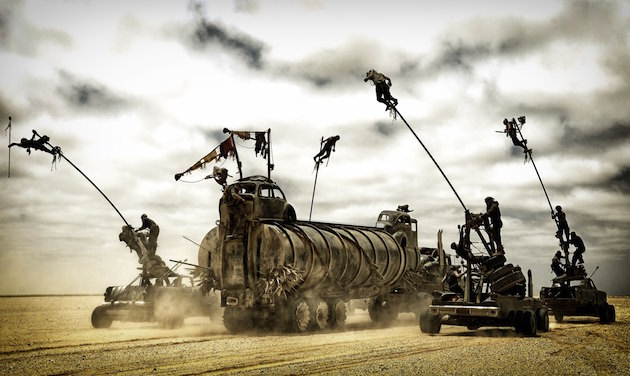 Do you have a favorite vehicle?

I loved the process of developing the War Rig – Imperator Furiosa's (Charlize Theron) vehicle. Its truck tows a trailer with a tank, which tows a fuel pod. We used a Tatra T 815 Truck as a prime mover; we pushed the cabin back so the engine was pronounced, with a bonnet. Peter Pound had drawn concept illustrations years before, so I used the illustrations, and the existing Tatra to draw our design. 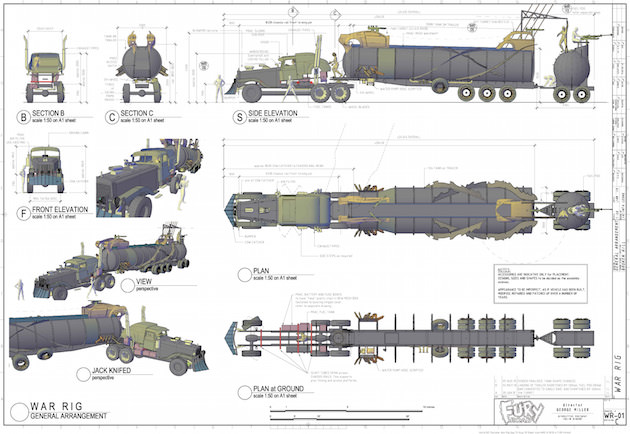 Drawing and modelling is a "level" or stage of design, and it's here that we see proportions, choose colours, and check moving parts. On the War Rig, as we added elements – such as spikes and skulls – we continually checked that they wouldn't be crushed when the vehicle turned or jack-knifed. The Tatra has swinging half axles, so we took that into account to make sure our fenders were clear of the swing.

We positioned weapons and studied how the actors would fit in the cabin, and on the exterior in turrets and swinging on davits as they defended the vehicle.

I used 3DSMax to show George Miller and Colin various designs, where they could "walk" around it on the computer screen, ask for different views, and see how various parts moved and turned. The software adjusted elements interactively, such as the curves of the tank's toothed blades. I used modifiers to vary the bend of the curves, spinning through the minimum and maximum extents of "bend".

I generated 41 drawings of the War Rig to get it built, and enjoyed working with Mark Gatt, our Steel Dept Supervisor. The steelwork required fabricating, rolling, welding, cutting and R&D to modify and build. There were spikes, vents, the grille, dressing, lighting panels, and it was a great chance to be inventive. 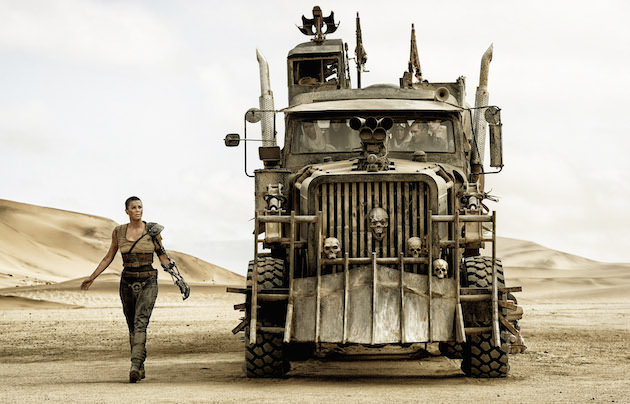 The War Rig went through a lot of damage through the story, so Charlie Revai and I produced a document to show how damaged it should appear in different scenes. The War Rig was an all-singing, all-dancing vehicle that satisfied design, engineering, mechanical, and story requirements. It was a challenging exercise that I truly enjoyed. Working on Mad Max: Fury Road was an awesome experience. I learnt a lot, and I hope I contributed something, too.

You are credited along with Shria Hockman as the art director. What was it like working with her? Who else on the crew did you collaborate closely with?

I didn’t meet Shira, but I would like to; we corresponded by email while I was in Australia, and she was in Namibia. I did not travel to Namibia for the shoot, so I sent files to her to continue. Andrew Chan was assistant art director. He generated construction drawings and diagrams for vehicles and Citadel sets. I worked with Katie Sharrock, our set decorator, who found and made an incredible collection of materials, textures and dressing for the vehicles. Mark McKinley was our mechanic. He's brilliant…he can make anything work! Mark Natoli did very fine panel beating work, including innovative methods of making embossed tail pipes. SFX Supervisor Dan Oliver and his SFX department problem-solved the vehicles' engineering and rigs. I was privileged to work with the VFX Dept and Concept Illustrators at George Miller's "Metro" office, as we prepared to "pitch" all the ideas in an animatic that conveyed the Citadel run sequence. 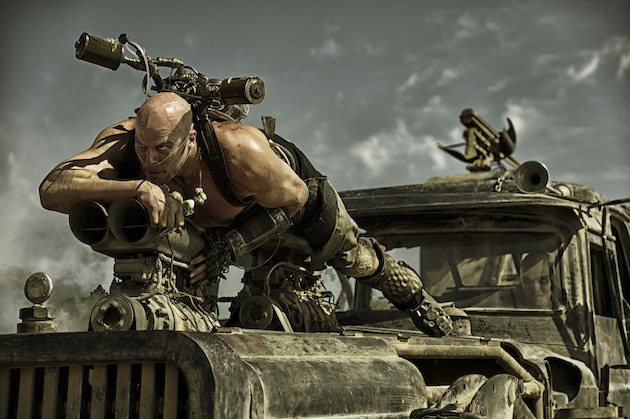 Walk us through the creation of a specific environment or moment—what you did and how you did it.

The Citadel had Interiors including the Blood Bank, Branding Room, Vehicle Room and Altar. These Interiors were linked by warren-like tunnels through which Max runs on in a descent to hell. We had the sets in 3D, and I animated Max running through, so we had a sense of timing and spatial experience. For example, the Blood Bank was where Max is caged and tattoo'd. I modelled this set in 3DSMax, animating how Max fell out of the cage. 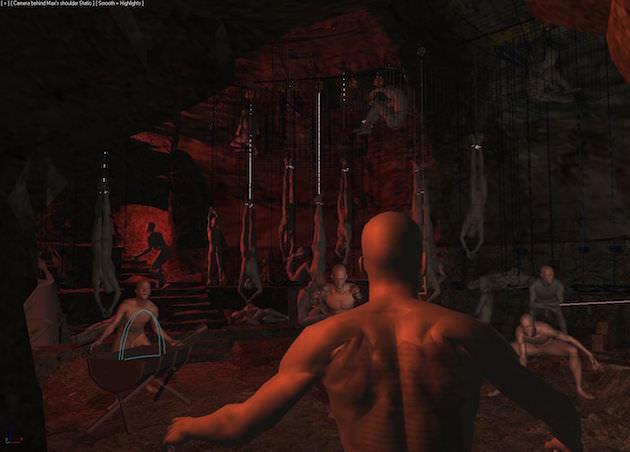 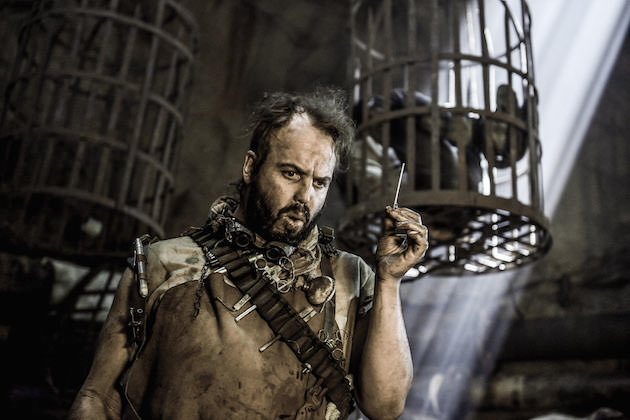 For these sets, I used cameras with different lenses, and different heights and tilts for Colin to review. He would give me feedback with each revision. In these views, we could also look at positions and intensities of lighting and fire to add to the atmosphere. I'm not sure how much of these sets end up on the cutting room floor, so I'll find out at the cinemas!

The film might be titled Mad Max, and Hardy is great as he always is, but your real hero is Furiosa. Charlize Theron joins our pantheon of badass heroines, alongside of Michelle Rodriguez's Letty from the Furious films, Emily Blunt's Rita from Edge of Tomorrow, Uma Thurman's The Bride from the Kill Bill films, Linda Hamilton's Sarah Connor from the Terminator films, and, the godmother of heroine badasses, Sigourney Weaver's Ripley from Alien. Mad Max: Fury Road also surprises by giving you not one but several seriously kick-ass women who factor prominently in the film's conclusion.