H.R. Giger's work has informed the popular imagination to an extent the Swiss surrealist painter could never have guessed when he began his work. He's most well known for his Oscar-winning creations for Ridley Scott's Alien, a film that has touched nearly every science fiction story that has followed it. Giger's influence extends far past Hollywood, however. Horror fanatics, punk and goth culture, pop music, a cottage industry of album cover art, tattoos, and fetish art (Giger's work was brazenly, unapologetically sensual) have all taken something from his singular paintings and sculptures. 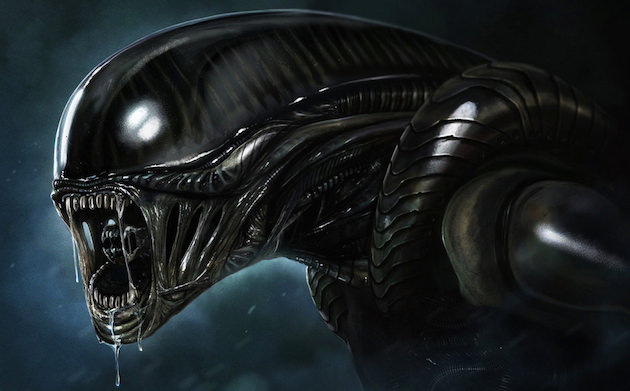 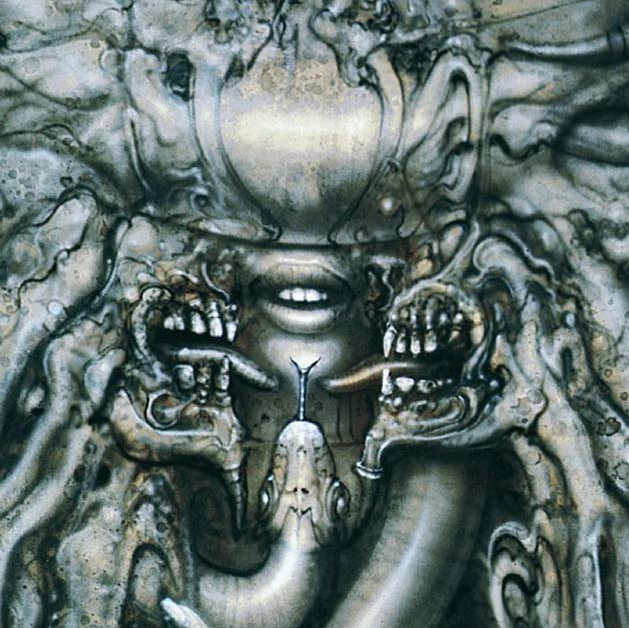 The Giger that we meet in the Swiss documentarian Belinda Sallin's documentary, Dark Star: H.R. Giger's World, is perhaps not the man you'd expect. Like other masters of the dark arts (David Cronenberg and David Lynch come immediately to mind, mainly because we interviewed the former and attended a talk with the later), Giger himself is not a dark soul. He admits in the film that he doesn't actually like dwelling in the fantastical, frightening world of his creations—he does it so he can face these fears. 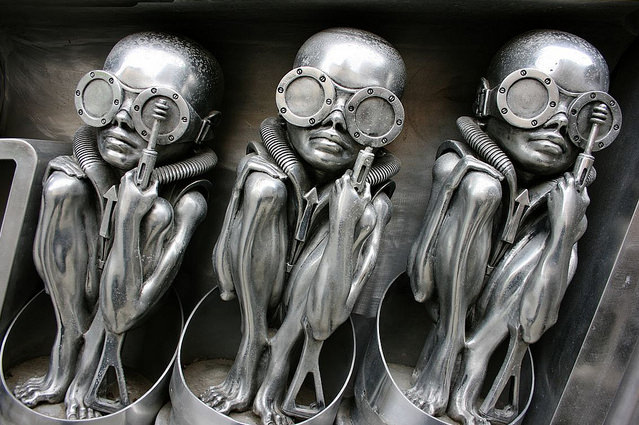 Giger was also funny. After his life had been turned upside down by Ridley Scott's interest in his work for his upcoming Alien, Giger found himself on set with Scott, helping him not only create the central creature, one of the most iconic monsters in film history, but in many of the film's trademark details, like those alien eggs. When he was creating the eggs, the producers were concerned that when they opened, they appeared too vaginal, and were therefore obscene. Giger was told the film would be played in Catholic countries, so he'd have to tweak his design. He did so, making the eggs' openings more “cross-like,” an effect he said made them “doubly obscene.”

We spoke with Sallin about her interest in Giger's work, her experience spending time at his wonderful, wild home, and the artist's lasting legacy. 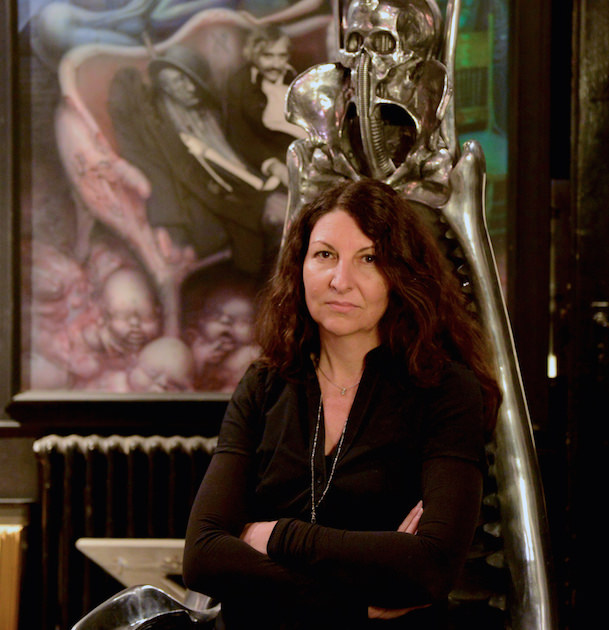 What drew you to him?

It was a coinicindence, I’d met Sandra, a former partner of his, and she introduced me to him and that opened the door. It was the first time I went into his house and met him, I knew I wanted to make this film. I was overwhelmed when I saw his world. The very first meeting with him was so cool, and he wasn’t like what I expected he could be. Based on his art I thought he’d be a dark man, but it was the opposite. He was such a nice, friendly, kind, welcoming man. It was this moment I knew I wanted to do this film. I think H.R. Giger was able to manage and handle his fears with his art, with his work. So he didn’t need to be a dark or mean person. He created it all in his art, it flew out of him, so he could remain kind.

Although he was on his specific artist path, is it fair to say it intensified after the death of Li Tobler, his girlfriend and muse?

I was very surprised when he talked about Li with me. I asked him what it was like to live with her, and what it was like when she was gone. I was surprised that he started talking about her, and I had a feeling that he was relieved that somebody asked him about that. I think he never talked about it. It was very special to me, and very precious to me. I think his art became a little bit darker after Li's death. He created the Necronomicon a short time after she died. This is also when he created the monster who is the base for Alien. Once Giger created Necronomicon, the screenwriter Dan O’Bannon showed the book to Ridley Scott, and Ridley knew that was his monster. This happened all after Li died, so yes, his art became even darker. 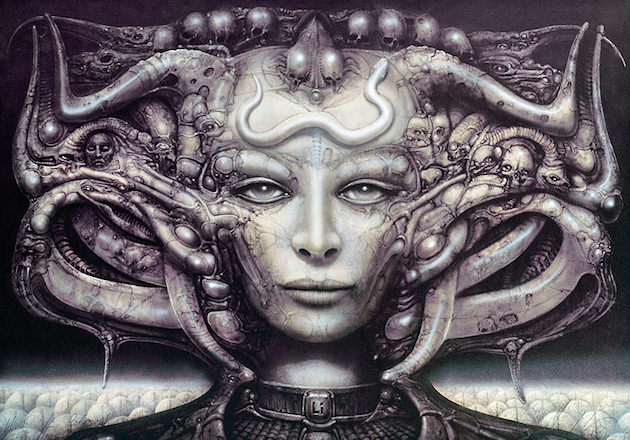 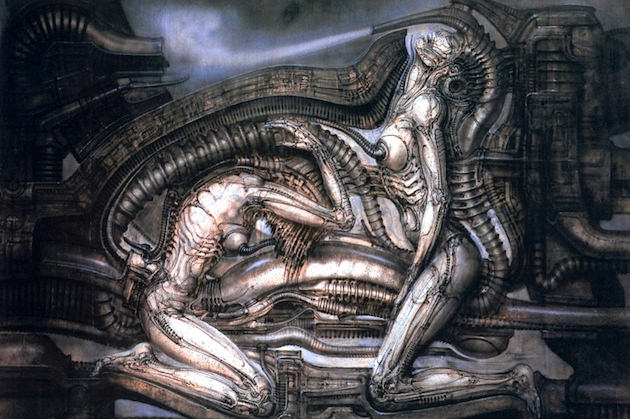 I would say the first times I was there, it was really weird [laughs], I was fascinated, of course, it's an extraordinary house, but the more I was there, the more I felt at home [laughs]. Really, I liked to be there, you are comfortable there. It’s because of the host. Giger was friendly and nice, and Carmen [his wife] is as well. So I liked to be therea lot. I’m regularly there now.

Did you have any favorite pieces?

This is a difficult question because there are so many. Maybe "Spell 2," which you see in the film, towards the end, it’s in the museum of H.R. Giger, where he says that “this is my favorite drawing.” There are four very large pictures, and in "Spell 2," there is everything; life, birth, death, mystery, humor, and many more things. 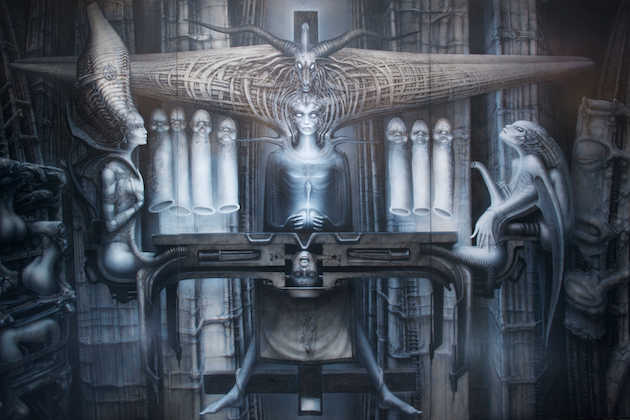 People seem so drawn to him—where exactly do you think that comes from?

He was a very kind man, so of course many people were attracted to him, but it’s also his art, which is very mysterious. It’s an enigma, and it's natural to try to figure out an enigma, many people like that. H.R. Giger maintained that enigma—he was not somebody who liked talking a lot, he never liked talking about his art, he didn’t like when I asked him what he wanted to say with his painting. He expressed himself with his art.

How big of a shock was it that his art becoming a part of the film world?

He really wanted to show his world and his vision in three dimensions, so he really liked working with Ridley Scott, who let him build his own alien world. He would have been looking for ways to do that even if Ridley Scott didn’t want to work with him. He used album covers, film, many different media, it’s part of his work. You could call H.R. Giger a transmedia pioneer. In the 70s this was a quite unusual thing to do.

Giger still had the fire at the end, even despite being sick.

Yes, I’m glad you see that. He was trapped in his body, he was ill, but inside the young man was still there.

Were people eager to speak to you?

Yeah, it was definitely like that. They like to talk about H.R. and his art, but they had doubts, too. They were anxious about his health, so it was really my intention to make it very comfortable for everyone involved. We got along very well, it was really nice to talk to H.R., I really liked to be there. We got along very well together. He also had a really great sense of humor, we laughed a lot during the film sessions. 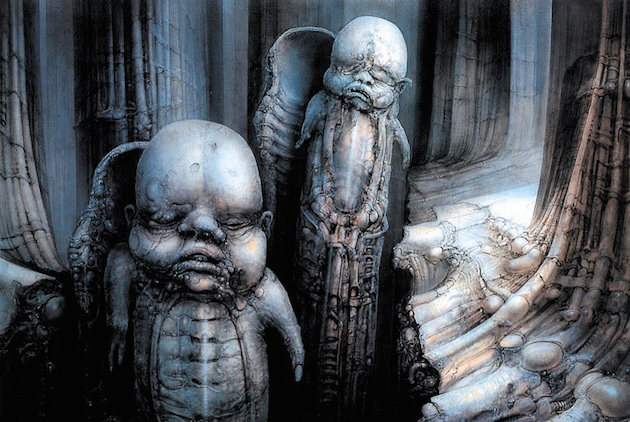