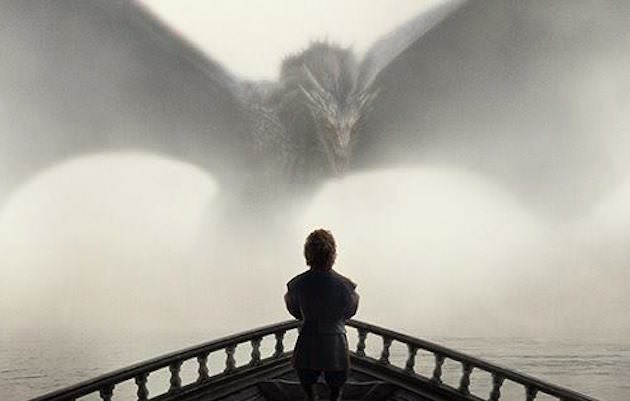 Details on Jurassic World, Questions About Game of Thrones & More

A few things on our minds that we'd love your feedback on, including excitement over Jurassic World, frustration with a certain awful someone on Game of Thrones, and hope for an upcoming comedy. Let us know what we've missed and what you think on the below.

Jurassic World's Indominus Rex is not only a crazy hybrid dinosaur but also a sly jab at our insatiable appetite for the next big thing.

The biggest, baddest dinosaur of the bunch in the upcoming Jurassic World would be Idominus Rex, a 50-foot long, 18-foot tall freakshow of strength, speed and ferocity. Entertainment Weekly’s Joe McGovern spoke to director Colin Trevorrow about the new beast. Here's a snippet of what Trevorrow said:

"And in the world of the movie the animal is designed based on a series of corporate focus groups. Like in the same way a lot of movies are. They sit a bunch of people down and they ask them, 'What can we do to make the dinosaurs more entertaining for you? What would make you tell a friend to come to Jurassic World?' And their answer is, of course, 'We want to see something bigger, faster, louder, more vicious; we want a killer.' And they get what what they ask for…we live in a cult of the upgrade right now. There’s always something around the corner that will make whatever you think is cool right now feel obsolete. And I feel like the Indominus Rex is the animal version of that."

Game of Thrones is somehow getting even darker.

While this past Sunday's episode was riveting (Cersei has been very active this season, and it looks like she's perhaps been a bit too active), we’re all still reeling from the end of “Unbowed, Unbent, Unbroken,” the previous episode in this weird, interesting, unsettling season. It is now fair to ask whether Ramsay Bolton is the absolute most vile GOT character since this show began. It was hideous enough watching him turn Theon Greyjoy into Reek (or what about the opening of that season four episode where Ramsay and his mistress Myranda, the gal Sansa Stark puts in her place while Myranda bathes her, hunted a terrified girl named Tansy through the woods with a pack of a dogs?)—but what he did to Sansa on their wedding night was easily the most difficult moment in this series thus far, involving the long suffering Sansa and Theon into a single moment of pure wretchedness. For those of you who didn’t read the books (and please, if you have, don’t spoil anything for the rest of us), do you think Ramsay will ever get his comeuppance? GOT creator George R. R. Martin is notorious for not giving his readers what they want, so the idea that Reek/Theon or Sansa will exact revenge is far from a given. Keep in mind it wasn’t Sansa who got to dispatch the former Worst Person in Westeros, Joffrey Baratheon, after he killed her dad and forced her to visit his head on a pike—that long sought after regicide was taken care of by Lady Olenna and Littlefinger. So who is going to take care of this lunatic once and for all? It's asking too much for Sansa and Theon to do it together, but someone has to do this. The purity of his awfulness has run it’s course!

The conceit is pretty great—aliens mistake a time capsule we sent out in 1982 for a declaration of war (I think?) and turn the tidbits of our early 1980s culture that we shared into the very things they send down to destroy us. That means our heroes (including Peter Dinklage!) need to tap into their greatest gifts—video game prowess from the era that brought us Pac-Man, Donkey Kong and Centipede, and defeat these pixilated monstrosities once and for all.

The New York Times Michael Cipley reminds us of Hollywood’s love of destroying itself in film. With San Andreas opening up this Friday, once again we’ll get to see the Hollywood sign crumble, Los Angeles in general get destroyed, and perhaps the majority of the state. Cipley interviewed Ken Feil, an Emerson College professor and author of “Dying for a Laugh: Disaster Movies and the Camp Imagination,” who said that “audiences get a reflexive thrill in seeing Hollywood—the place that created the movie they’re watching—get decimated.”

John-Stewart Gordon, a professor of anthropology and ethics at the University of Cologne in Germany, emailed Cipley that watching seemingly successful people punished by earthquakes, sudden illnesses or bad luck “is literally calming down the people’s anger (that they are less fortunate) and a perverse form of healing the tormented souls.”

A chicken nugget-borne illness that can turns the prepubescent into zombies? Right. Cooties is a zom-com with a great cast of goofballs (Rainn Wilson, Alison Pill, Nasim Pedrad, Elijah Wood), a pleasingly ridiculous conceit, and a touch of that Zombieland appeal.

And then there’s Nazi zombies on flying sharks.