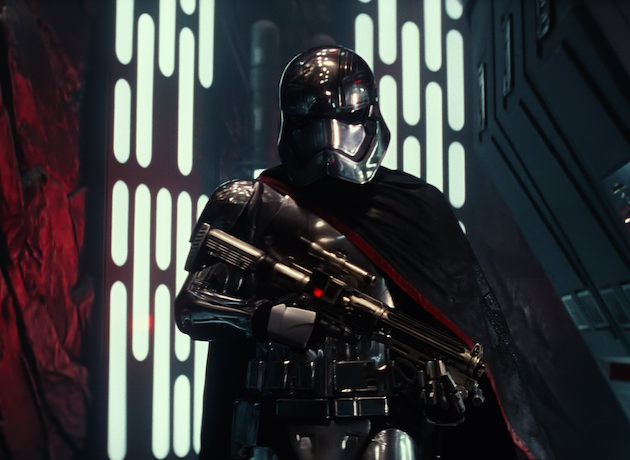 From the opening shot of what appears to be two Snowtroopers marching on the frozen plains of their secret base, Vanity Fair’s Star Wars cover shoot, including a 45-second video, is exactly what fans want on Star Wars Day. So yes, May the Fourth be with you.

Thanks to Vanity Fair, there’s some fresh news to report; revealing shots and video two of the film’s main characters—played by Adam Driver and Lupita Nyongo’o—are seen in a beautiful photo gallery (created by the legendary Annie Leibovitz) and the behind-the-scenes video they uploaded today. The question on Star Wars fans minds are; who exactly are they?

There’s been plenty of speculation that Driver’s character (who can be seen in all-black in the video and photographs) is playing Kylo Ren, a bad guy with that much discussed three-pronged lightsaber. Lupita Nyong’o’s character, Maz Kanata, is little known, save for the fact that she’ll look nothing like Lupita, who can be seen in the video and photos wearing a performance capture suit, and having her facial expressions mapped by tracking dots so the artists at Industrial Light & Magic can transform her into her character. VF reports that Maz Kanata is a pirate of some sort, putting her in league, professionally, with the likes of Han Solo and Lando Calrissian.

The photo spread includes shots of Resistance pilot Poe Dameron (Oscar Isacc) standing alongside his X-wing fighter, young heroine Rey (Daisey Ridley), seen astride her speeder in the marketplace on the planet Jakku, and an assortment of galactic travelers, smugglers and “other assorted riffraff” in the main hall of Maz Kanata’s castle.

Click here for photos by Annie Leibovitz on the set of Star Wars: The Force Awakens.