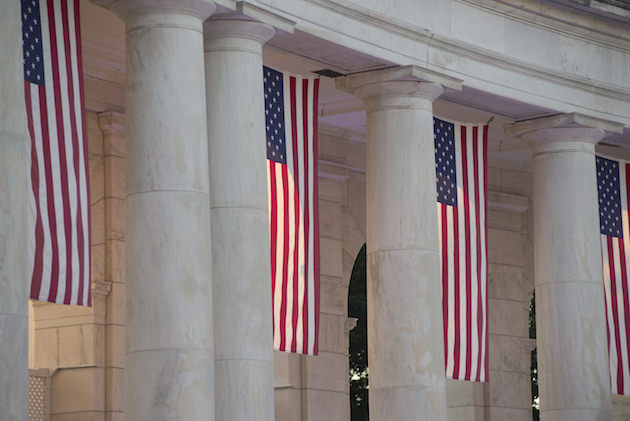 We all know that Memorial Day is national holiday set aside to remember those brave men and women who made the ultimate sacrifice for our nation. For most of us, this is where our knowledge of this day ends. So let the department of Veteran's Affairs explain what Memorial Day is all about:

Three years after the Civil War ended, on May 5, 1868, the head of an organization of Union veterans — the Grand Army of the Republic (GAR) — established Decoration Day as a time for the nation to decorate the graves of the war dead with flowers. Maj. Gen. John A. Logan declared that Decoration Day should be observed on May 30. It is believed that date was chosen because flowers would be in bloom all over the country.

The first large observance was held that year at Arlington National Cemetery, across the Potomac River from Washington, D.C.

The ceremonies centered around the mourning-draped veranda of the Arlington mansion, once the home of Gen. Robert E. Lee. Various Washington officials, including Gen. and Mrs. Ulysses S. Grant, presided over the ceremonies. After speeches, children from the Soldiers’ and Sailors’ Orphan Home and members of the GAR made their way through the cemetery, strewing flowers on both Union and Confederate graves, reciting prayers and singing hymns…

There are many movies that celebrate the incredible contribution of our military. Here are four great films particularly appropriate for Memorial Day. You can find them on WheretoWatch.com:

Glory is a celebration of a little-known act of mass courage during the Civil War. Simply put, the heroes involved have been ignored by history due to racism. Those heroes were the all-black members of the 54th Regiment of the Massachusetts Volunteer Infantry, headed by Col. Robert Gould Shaw (Matthew Broderick), the son of an influential abolitionist (played by an uncredited Jane Alexander). Despite the fact that the Civil War is ostensibly being fought on their behalf, the black soldiers are denied virtually every privilege and amenity that is matter of course for their white counterparts; as in armies past and future, they are given the most menial and demeaning of tasks. Still, none of the soldiers quit the regiment when given the chance. The unofficial leaders of the group are gravedigger John Rawlins (Morgan Freeman) and fugitive slave Trip (Denzel Washington), respectively representing the brains and heart of the organization. The 54th acquit themselves valiantly at Fort Wagner, SC, charging a fortification manned by some 1,000 Confederates. Glory was based on Lincoln Kirstein's "Lay This Laurel" and Peter Burchard's "One Gallant Rush"; the latter book was founded on the letters of Col. Robert Gould Shaw, the real-life character played by Matthew Broderick. The film won a Best Supporting Actor Oscar for co-star Denzel Washington, and additional statuettes for Best Cinematography (Freddie Francis) and Sound Recording.

When World War I hero Alvin York agreed to sell the movie rights to his life story to Warner Bros., it was on three conditions: (1) That the film contains no phony heroics, (2) that Mrs.York not be played by a Hollywood "glamour girl" and (3) That Gary Cooper portray York on screen. All three conditions were met, and the result is one of the finest and most inspirational biographies ever committed to celluloid. When the audience first meets young farmer Alvin York (Cooper), he's the cussin'est, hell-raisin'est critter in the entire Tennessee Valley. All of this changes when York is struck by lighting during a late-night rainstorm. Chalking up the bolt from the blue as a message from God, York does a complete about-face and finds Religion, much to the delight of local preacher Rosier Pile (Walter Brennan). Despite plenty of provocation, York vows never to get angry at anyone ever again, determining to be a good husband and provider for his sweetheart Gracie Williams (Joan Leslie). When America goes to war in 1917, York elects not to answer the call when drafted, declaring himself a conscientious objector. Forced to go to boot camp, he proves himself a born leader, yet still he balks at the thought of killing anyone. York's understanding commanding officer Major Buxton (Stanley Ridges) slowly convinces the young pacifist that violence is sometimes the only way to defend Democracy. Later on, while serving with the AEF in the Argonne Forest, Sergeant York sees several of his buddies, including his Bronxite best pal Pusher Ross (George Tobias), killed in an enemy ambush. His anger aroused, York personally kills 25 German soldiers, then single-handedly captures 132 prisoners. As a result, York becomes the most decorated hero of WW1, celebrated by no less than General John J. Pershing as "the greatest civilian soldier" of the war. The film won Gary Cooper his first Academy Award, and also picked up an Oscar for Best Film Editing. Not surprisingly, it ended up as the highest-grossing film of 1941.

Steven Spielberg directed this powerful, realistic re-creation of WWII's D-day invasion and the immediate aftermath. The story opens with a prologue in which a veteran brings his family to the American cemetery at Normandy, and a flashback then joins Capt. John Miller (Tom Hanks) and GIs in a landing craft making the June 6, 1944, approach to Omaha Beach to face devastating German artillery fire. This mass slaughter of American soldiers is depicted in a compelling, unforgettable 24-minute sequence. Miller's men slowly move forward to finally take a concrete pillbox. On the beach littered with bodies is one with the name "Ryan" stenciled on his backpack. Army Chief of Staff Gen. George C. Marshall (Harve Presnell), learning that three Ryan brothers from the same family have all been killed in a single week, requests that the surviving brother, Pvt. James Ryan (Matt Damon), be located and brought back to the United States. Capt. Miller gets the assignment, and he chooses a translator, Cpl. Upham (Jeremy Davis), skilled in language but not in combat, to join his squad of right-hand man Sgt. Horvath (Tom Sizemore), plus privates Mellish (Adam Goldberg), Medic Wade (Giovanni Ribisi), cynical Reiben (Edward Burns) from Brooklyn, Italian-American Caparzo (Vin Diesel), and religious Southerner Jackson (Barry Pepper), an ace sharpshooter who calls on the Lord while taking aim. Having previously experienced action in Italy and North Africa, the close-knit squad sets out through areas still thick with Nazis. After they lose one man in a skirmish at a bombed village, some in the group begin to question the logic of losing more lives to save a single soldier. The film's historical consultant is Stephen E. Ambrose, and the incident is based on a true occurance in Ambrose's 1994 bestseller D-Day: June 6, 1944.

Though the anti-war sentiments of Hamburger Hill come through loud and clear, the film is squarely on the side of those courageous, much-maligned Americans who fought and died in Vietnam. Based on a true incident, the story takes place in 1969, as the 101st Airborne Division confronts the Vietcong in a bloody battle over Hill 937 (aka "Hamburger Hill") in the A Shau Valley. During the next ten days, both sides incur heavy losses, but the Cong refuse to surrender the hill. The ultimate American "victory" turns out to be a hollow one indeed. Scripted by Vietnam War vet Jim Carabatsos, Hamburger Hill not only underlines the futility of the war but also the pressures brought to bear upon the troops by an insensitive, often hostile media. By utilizing a cast of unknowns, director John Irvin deftly avoids the Hollywoodized slickness of such bigger-budgeted efforts as Apocalypse Now and The Deer Hunter.