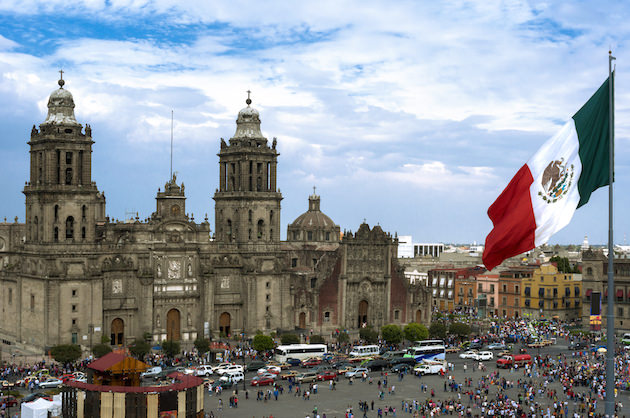 Do you know the origins of Cinco de Mayo? You’re not alone if you don’t – it’s the commemoration of the Mexican army’s unlikely victory over the French at the Battle of Puebla in 1862.

Let’s get into the spirit of the holiday, and the many glories of Mexico, through film. Head over to WheretoWatch.com to find these Mexican-themed favorites.

A defining battle in Mexican history comes to the big screen in this historical war drama detailing the Battle of Puebla. The year was 1862: As the conquering French army attempts to establish a monarchy in Mexico, General Ignacio Zaragoza (Kuno Becker) assembles a ramshackle regiment in a bid to defend the city of Puebla. Outnumbered and outgunned, the brave soldiers fight to drive out the invading forces as the flames of war stoke the passions of two young Mexican lovers.

Mexican filmmaker Guillermo del Toro returns to the phantasmagorical cinema that defined his early work (Cronos, The Devil’s Backbone) with gusto in this gorgeous, heartbreaking tale. Set in the aftermath of the Spanish Civil War, Pan’s Labyrinth details the strange journeys of an imaginative young girl who may be the mythical princess of an underground kingdom. Her mother, Carmen (Ariadna Gil), recently remarried the sadistic army captain Vidal (Sergi López) and will soon bear this monster’s child. Shy young Ofelia (Ivana Baquero) is forced to entertain herself as her recently-formed family settles into their new home nestled deep in the Spanish countryside. As Ofelia's bed-ridden mother lies immobilized in anticipation of her forthcoming child and her high-ranking stepfather remains determined to fulfill the orders of General Francisco Franco to crush a nearby guerilla uprising, the young girl soon ventures into an elaborate stone labyrinth presided over by the mythical faun Pan (Doug Jones). Convinced by Pan that she is the lost princess of legend, she endeavors to complete a trio of life-threatening tasks in order to return to her underground home. As Ofelia sets out to reclaim her kingdom amongst the brutality of the Spanish Civil War, she is constantly pulled between the horror around her into the increasingly dangerous realm that Pan tries to guide her through. This was one of the best films of 2006, and perhaps is still Del Toro’s masterpiece.

After being attached to a number of actors, directors, and producers, this long-gestating biography of one of Mexico's most prominent, iconoclastic painters reaches the screen under the guiding hand of producer/star Salma Hayek. Hayek ages some 30 years onscreen as she charts Frida Kahlo's life from feisty schoolgirl to Diego Rivera protégée to world-renowned artist in her own right. Frida details Kahlo's affluent upbringing in Mexico City, and her nurturing relationship with her traditional mother (Patricia Reyes Spindola) and philosophical father (Roger Rees). Having already suffered the crippling effects of polio, Kahlo sustains further injuries when a city bus accident nearly ends her life. But in her bed-ridden state, the young artist produces dozens upon dozens of pieces; when she recovers, she presents them to the legendary — and legendarily temperamental — Rivera (Alfred Molina), who takes her under his wing as an artist, a political revolutionary, and, inevitably, a lover. But their relationship is fraught with trouble, as the philandering Rivera traverses the globe painting murals, and Kahlo languishes in obscurity, longing to make her own mark. Frida was directed by Julie Taymor, whose Broadway production of The Lion King won her international acclaim.

Mexican-born, New York-based filmmaker Alfonso Cuarón directed this Mexican box-office smash hit about a pair of randy upper-class buddies that sparked some controversy for its frank depiction of drug use and sexual exploration. With their respective girlfriends away in Europe, Julio (Gael García Bernal) and his upper-class friend Tenoch (Diego Luna) are looking forward to a summer full of drink, drugs, and cheap meaningless sex. During a wedding, they meet Luisa (Maribel Verdú) — the 28-year-old wife of Tenoch's scholarly cousin — and try to convince her to go on a road trip to Heaven's Mouth, a made-up beach paradise the two claim is on the Oaxacan coast. To their surprise, Luisa — who is looking to escape her troubled life for a spell — agrees to go along. Two days into the trip, tension starts to build between the two friends: Luisa has had sex with each, and now both lads are not-so-quietly vying for her affection. Soon simmering jealousies boil over into savage arguments, threatening to completely destroy their friendship. After an enormously successful run in Mexico and Guatemala, this film was screened to much acclaim at the 2001 Venice, Toronto, and New York Film Festivals.

Three stories of life along the margins in Mexico City converge in this inventive thriller. Octavio is sharing an apartment with his brother, which leads to a serious problem when he falls in love with Susanna, his sister-in-law. Octavio and Susanna want to run away together, but Octavio has no money. He does, however, know a man who stages dog fights, and he volunteers his dog Cofi for the next round of fights. Cofi bravely rises to the occasion, but the dog's success in the ring leads to a violent altercation. Elsewhere, Daniel, a successful publishing magnate, leaves his family to take up with a beautiful model, Valeria. Valeria, however, soon loses a leg in an auto accident, and as Daniel tends to her needs, her tiny pet dog gets trapped under the floorboards of their apartment. And finally, El Chivo (Emilio Echeverria) is an elderly homeless man who is trying to contact his daughter, whom he hasn't seen in years. Desperate for money, El Chivo is hired by a businessman to assassinate his partner; however, as he's following his target, he's interrupted by an auto accident, from which Octavio and his injured dog stagger in search of help. Amores Perros (aka Love's a Bitch) was the debut from director Alejandro Gonzalez Iñárritu, who had a pretty good 2014 with Birdman.

Director Robert Rodriguez picks up where his successful independent debut El Mariachi left off with this slam-bang South of the Border action saga. Bucho (Joaquim DeAlmeida) is a wealthy but casually bloodthirsty drug kingpin who rules a seedy Mexican border town. Bucho and his men make the mistake of angering El Mariachi (Antonio Bandera), a former musician who now carries an arsenal in his guitar case. Bucho was responsible for the death of El Mariachi's girlfriend and put a bullet through his fretting hand, making him unable to play the guitar. Bent on revenge, the musician-turned-killing machine arrives in town to put Bucho out of business, though he finds few allies except for Carolina (Salma Hayek), who runs a bookstore that doesn't seem to attract many readers. Desperado features supporting performances from Cheech Marin as a cynical bartender, Steve Buscemi as the cantina patron who sets up the story, and Quentin Tarantino as a man with a really terrible joke to tell.