Why NBA Star Serge Ibaka is the Son of the Congo

He would wake up at four in the morning to go running through the streets of Congo. He'd play as much basketball as he could, in old sneakers or barefoot, if need be. When his mom died and his dad was thrown in prison, he was kicked out of his uncle's house and lived on the streets, often sleeping in a parking lot. But Serge Ibaka never wavered in his commitment to make basketball his life. And when he did, becoming a star forward for the Oklahoma City Thunder, Ibaka began coming back home every summer to see what he might be able to do for his country. He harbors no illusions, not even the clout of Congo's most famous son could make a dent in the country's complex reality, but every year Ibaka goes home to see what he can do.

I got a chance to speak to director Adam Hootnick and executive producer David Jacoby about Son of the Congo, which follows Ibaka’s annual trip back to his birthplace in the summer of 2014. His return is both joyous and intense, as he juggles the needs of his family, friends and strangers alike. The film is a sympathetic portrait of the immensely likable Ibaka, but by no means does it paint a rosy picture of what's going on in his home country, and it shows the immense pressure the 24-year old puts on himself to make a difference.

We spoke to Hootnick and Jacoby about this labor of love, which premieres this Friday night at 7pm EST on ESPN.

What was it like shooting in Congo, especially in those moments when Serge is being surrounded? From a practical standpoint, how did you manage those moments with your crew?

Hootnick: In this kind of environment, where it’s so fluid and we have no cultural grounding and we don’t know where the line is between who are fans surrounding Serge and who might be pushing it too much, all I can tell you is you operate on instinct a lot. You want to stay as small as you can be, both in terms of the number of people in your crew, the number of cars in your entourage, and even the size of the camera. And you make sure you never go anywhere without having people you know and trust to tell you what the landscape is and what’s going on. 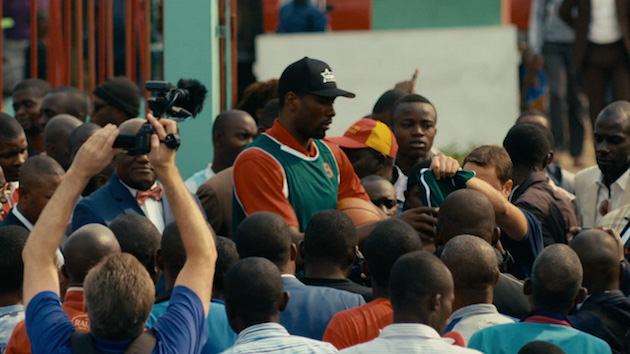 Did you have guides?

Hootnick: Serge was ultimately our guide, if Serge said we’re cool, we trusted that we were cool. He’s honestly a far bigger target than we were, literally, he’s 6’10”, everybody sees him, so ultimately that’s where most of the attention goes. So it’s our job to stay out of the way, let things unfold the way they’re going to, and to try not to change the situation.

What was the genesis of the project?

Jacoby: Grantland is run by Bill Simmons, and he’s got a public facing email account. Jordi [Villa Sanchez], one of Serge’s trusted confidants, wrote that public email and said, ‘Hey, I represent Serge Ibaka, we’d like to do something with Grantland about his return to the Congo.’ And Bill got that and forwarded it to me, and I immediately questioned it’s authenticity, because we often times hear that so-and-so represents so-and-so. I did some Googling and found out, whoa, this is real. We had some conversations about who would be the right person to do this, and we’d worked with Adam before and everyone had a good experience, so we just thought that this would be the perfect match.

I think going into the film a lot of people might suspect it’s a "triumph of the human will" type of story, but it’s much more complex and deals more directly with what life is like in Congo today. Was that a goal going in, or did that occur simply from being there and filming Serge moving about?

Jacoby: When Adam and I first talked about it, Adam was adamant about not wanting this to be some cheesy puff piece. So we had that conversation, then Adam had a meeting with Serge in advance of committing to the project.

Hootnick: To Grantland’s credit, when we went into this we didn’t know what the story was. We had no idea what was going to happen. There’s a reason indie filmmakers are usually the ones who do these kinds of films, because frankly, you’re taking the risk on your own. For a media company to do that, and potentially put together a project that might turn into nothing, is a really big risk to take, and you can’t do that very often.

So you just flew with Serge to Congo with your crew and were like, well, let's just see what happens?

Hootnick: I was clear with Serge and his team about this, that nobody is going to learn anything about Congo if we’re not actually seeing something interesting inside Serge’s world. If what you want to do is make a movie that’s photo-ops, I’m not the right guy to make that movie. Serge told me himself, ‘You’ll see my whole life.’ It still didn’t mean necessarily that his life would be interesting, but I knew at least we had those ground rules set. 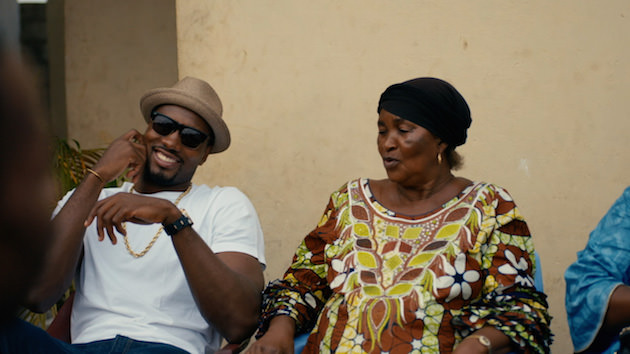 Hootnick: When I saw that he was completely transparent. He got it that if the viewer could understand what’s stressful to him about being back in Congo, you'll better understand Congo. That was really his goal, he wants people to understand not just what his story is, but what life’s like for all the kids still growing up the way he grew up. I came in as the cynical filmmaker, thinking that maybe this story is seeing the guy who’s now the big star being confronted by the fact that he can’t make a difference, and in the end he changed me. I came out of it realizing that he understands what he can do is limited, but he’s never going to stop trying. 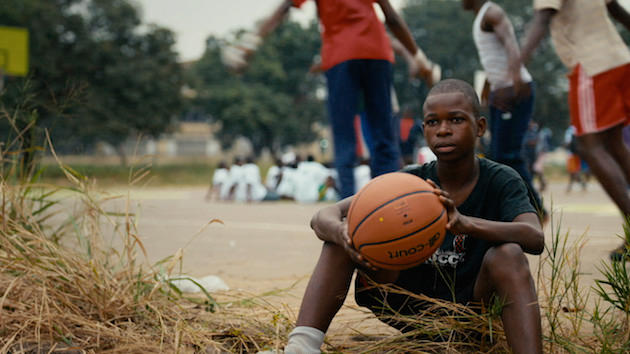 How long was your pre-production process in order to plan getting all your guys to the Congo and making it all work?

Jacoby: There wasn’t a lot of pre-production planning because we were under a very, very tight timeline. This was all happening very quickly. To get the contacts, visas, crew, flights, security, all of that was happening so fast and under such a crunch, this project was in jeopardy of not happening I’d say at least nine times in the pre-production. This was not something we decided to do in 2013, this is something we decided to do last May.

That’s insane, so what was the fire under your asses to get this done immediately rather than take more time and do it this year?

Hootnick: He prefers it [laughs]. I give so much credit to our cinematographers [Boez Freund & Robert Hauer]. What I'm trying to do is really take a visual approach that feels less like the gritty, follow-the-subject doc and more like a narrative, and that’s what’s really hard. You need some nice glass and you need a good AC to be able to shoot stuff that way, and I think it comes through and that they did an amazing job.

Jacoby: And because it’s in another language, it has to speak to you visually.

Did the apparatus of filmmaking—the fact you have your crew, your equipment, etcetera, invariably change the dynamic while you there?

Hootnick: In this case the camera is quite frankly less interesting than Serge. I think people expect to see that around Serge, but he’s the draw, not us. If there was no Serge maybe people would have been paying more attention to us. So there’s that, but I think there’s also sort of a sub-texture question too, which is the idea that people might be embarrassed to be seen asking Serge for money, and that’s not necessarily the case. In the way that there’s a cultural thing here where people might be shy about that, there it’s just sort of expected. If you have made it out and you work in Europe or the States and you come back, it’s just kind of expected that people are going to ask you for money.

When you watch it you feel a tremendous amount of stress for Serge as all these people surround him and want to touch him, talk to him, ask him for things.

Hootnick: I had to remind myself throughout this process that this dude is 24. He’s 24 and he’s arguably the best known person in his country, he is the head of both extended families, his mom’s side and his dad’s side, and he’s responsible for everyone. His agents will tell you he gets sick every year when he goes back just because he does get fatigued, it is draining to him, it is stressful, but he views it as his obligation and he truly does not forget where he comes from, and he feels this is what he can and should do. I went in having a somewhat cynical perspective on what this was going to be, and after having spent that time with him I felt a tremendous responsibility with this film, and I’d be failing him if that didn’t come through, if you watched the film and you didn’t understand how genuine he is and how moved he is by this and how much he feels connected to it. When he goes and talks to those orphans and says, ‘I grew up just like you,’ it’s not canned. Those aren't soundbytes. His goal is to make the footprint larger every year and try to do more. I hope this film helps him do that.