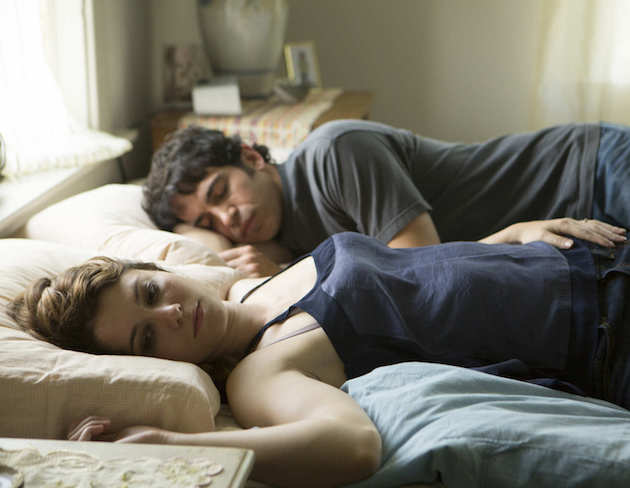 We had a both delightful and thought provoking conversation with busy actor Chris Messina about his feature film directorial debut – Alex of Venice. Having premiered at last year’s Tribeca Film Festival, this heartwarming and emotionally wrenching story of a woman and her family in quiet crisis is set to open on April 17th.

While Messina is perhaps best known as Dan Castellano in The Mindy Project, his expansive resume includes meaty television dramas like The Newsroom and Damages, and critically acclaimed movies like Argo and Vicky Cristina Barcelona.

Alex of Venice is centered on Mary Elizabeth Winstead as Alex, an overachieving environmental lawyer living in Venice, California with ‘house husband’/surfer/artist George (Messina), 10-year-old son Dakota (Skylar Gaertner), and father, Roger (Don Johnson), who is suffering the onset of dementia. Alex’s life falls apart when George no longer wants ‘their’ life. Abandoned by her support system, Alex struggles with the seismic changes that have been foisted upon her.

Loss is everywhere in Alex’s Chekhov-like world that in some ways parallels his “The Cherry Orchard,” the play Alex’s father Roger is acting in. Without her husband, Alex is a single mother, a caretaker of her failing father, and a lawyer protecting a vanishing environment. Her powerlessness evokes the struggles the characters in “The Cherry Orchard” face as she pleads before a judge to try and save a cherished piece of property.

Here is our interview with actor/director Chris Messina on his ambitious directorial debut.

You are a tremendously busy actor, working in television and film, how did you get into directing? How did this particular film come about?

I directed some plays years ago in New York in really small theaters, black box stuff; I really enjoyed it. I loved working with actors. I love actors. And then, I think, I found a certain way that I like to work as an actor, but I was hard pressed to find that way of working. So I thought well maybe I should create it for myself and for a group of actors that want to work that particular way. So I did a film called 28 Hotel Rooms and Electric City produced that. They are really amazing producers and they said we have this script; would you be interested and would you want to come on and play this role and direct it. It was off and running and that became Alex of Venice.

This is really the story of a woman rebuilding her life after being left by a man. In a lot of ways it was an interesting juxtaposition of conventional roles – the husband/father stays at home. What do you think being a male director brought to this woman’s story?

It wasn’t on purpose. I wasn’t looking for a man’s story or a woman’s story. I was looking for a character piece as an actor, a kind of playground. I felt the writing lent itself to that. Some of my favorite movies are Woody Allen movies, and they have such strong women. I was turned on by that, a character piece, and using those kinds of films as templates. I don’t think there enough great roles for women out there. It was exciting to see who could play this [Alex] and give some strong actress, in this case Mary Elizabeth, the chance and let her do her thing.

What in particular did you like about the script?

What I liked about the script is it never judged anyone in this movie to be bad or good. You walk out on people and it is terrible and people’s hearts are broken and it is awful, but the movie is about change. And this couple was together at a young age. The George character just wants a change and whether he is doing the right thing for Alex, it was thrust upon her. Everyone in the movie is going through changes, which are inevitable and painful. It is ultimately beautiful and what comes out on the other side is growth. So that was kind of the excitement of doing this movie. You know it’s explorative. You have a lot of stuff to deal with in the movie, but the couple will always love each other. They might not spend their lives together as lovers and under the same roof, but they will always love each other and they have a son together. But no matter what, and I know relationships like this, they will always love that person and remember those times fondly.

It's interesting that you played the character who leaves this family, but then you yourself were behind the camera watching them deal with that loss. How did it impact your directing?

I am sure I subconsciously directed the movie with that in mind. I never wanted anybody to be good or bad. Definitely, even to this day, when people say your character [George] did a bad thing, I kind of cringe because I don’t think he did a bad thing. Maybe the way he went about it wasn’t the best. I didn’t want Alex to be an angel. I wanted her to be complicated. I just wanted everyone to be human. We might talk on the phone and you might say ‘he is this way or that way’ and hang up and say something different, and I might be the opposite. I’m happy; I’m sad; I’m grumpy; I’m tired; I’m jubilant. That is what life is. I hate when I watch movies and everyone is black and white. Everyone is just gray. I grew up wanting to be an actor in the 70’s, and the characters I grew up with were so complex and complicated.

Any specific films jump out that really shaped you?

Even if you look at big big movies from that time period, like Jaws or Close Encounters, those movies had all the suspense and scary stuff, but inside those movies they are like Cassavetes films. They had complicated, interesting characters. Chief Brody (Roy Scheider) was afraid to go in the water! He was afraid; wasn’t he from New York? There he was in this beach town. He didn’t like the water. What an interesting idea. Now he is on the water and now he is facing his fears. Very interesting I think.

Why did you choose Venice, which really feels like a character in the film? In many ways the pace of the film seems to parallel the pace of its setting.

The script was always in Venice. I love Venice. I love the characters there. It is amazing people watching. There is a great vibe there. I feel like it is Brooklyn by the sea. I go there a lot and have friends that live there. People said it would be hard to shoot there and it would be expensive. We wouldn’t be able to do it and the people of Venice would be kind of aggravated by it. It was quite the opposite. The vibe there is amazing. Even the house where we shot the movie, you could just smell the ocean and that had a great effect on us as actors and certainly me as a director.

Did it help your creative energy?

Absolutely, and we stole a lot of shots. The light there is incredible. You feel invigorated by Venice, by the vibe. It is a pretty incredible place. I feel incredibly lucky that I got to create a film there. I am glad you said it, with a ‘character’ as beautiful and tough as Venice. I really feel lucky.

Another character in the film appears to be Chekhov. Alex's dad acts in The Cherry Orchard, while Alex and her co-workers face losing the land to a developer? Why the Chekhov parallels?

That is cool that you said that because that is the first time anyone has said that. You are the only person to say Chekov is the fourth character and that is right on. I did the play. I actually did The Cherry Orchard with Michelle Williams and Jessica Chastain. The play meant a lot to me. I was going through massive changes in my life and the play is all about change. I love doing Chekhov, I love his work as an actor. The writing is incredible, and so much is what's between his lines, what's happening with his characters. They are built as comedies, but they are so moving, and that is why I wanted to make this movie.