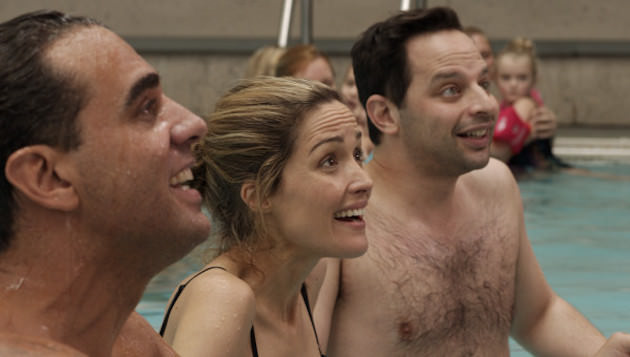 Nick Kroll knew that if he wanted a meaty role in a feature film comedy, he needed to develop it himself. Fortunately, Kroll has friends and colleagues who were willing to offer advice on transitioning from TV comic — he stars in his own Kroll Show on Comedy Central and has appeared in the sitcoms The League and Parks and Recreation— to film actor, even on a low budget indie.

Kroll gets story credit and stars in Adult Beginners, which opened in theaters April 24. He plays cocky entrepreneur Jake whose tech company’s big launch is a disaster. His life in a shambles, Jake flees Manhattan for the suburban home of his estranged pregnant sister Justine (Rose Byrne), her husband (Bobby Cannavale) and their three year-old son. He ends up working as a nanny for his nephew while trying to reconnect with Justine. Adult Beginners premiered at the 2014 Toronto International Film Festival and was quickly picked up for distribution by RADiUS-TWC.

The film is more of a dramedy than a broad comedy. Were you looking to challenge yourself by making more of heartfelt relationship comedy?

I think it was less of a need to do something unexpected and more to tell a story I thought would be an interesting one to tell. I love big, strong, broad comedy but I also love stuff that’s more subtle or has dramatic elements to it, so it was really born out of a desire to tell this particular story, which felt like it should be much more grounded than other things I’ve done in the past.

Where did the idea for the story come from?

I have 12 nieces and nephews, and I wondered what it would be like for a guy like me, the spoiled youngest brother, to take care of one of them. I wanted to see that guy grow up a little and see what he could become. I brought it to Mark Duplass, my costar in The League, and he mentored me though the process of producing it. We found the writers, Jeff Cox, who wrote Blades of Glory, and Liz Flahive, a writer on Nurse Jackie, a married couple who had a three year-old and by the time we went into production were pregnant with their second child, so they really connected to this particular moment in a couple’s life. They wrote the script and Mark and I helped move story along.

Had you worked with any of the cast members before?

Some of the actors in small roles like like Bobby Moynihan and Joel McHale are old friends of mine. I called in favors. We got lucky by putting together a quality group, especially Rose and Bobby who have worked on huge movies. To get people of that caliber to come work on our movie and sit in a freezing pool for three days was quite lucky.

The movie is a bit like the low-budget, polished indies Mark Duplass has made over his career. Did he guide you in that direction?

Mark was a real mentor for me as a producer because he’s done it so many times. He helped me deal with every element. Trying to get a movie of this size made is really hard, and he’s been through it so many times, he helped me navigate it. It is a lot of work to make a film; more than a TV show. But I enjoyed it and I’m proud of it. But it’s three- and-a-half years in the making

You are also a producer on the film. What did that involve?

I produce on my TV show so I was used to some of the crazy things that happen. We were shooting in New York last winter [2014]. It was snowing every day. We’re shooting a scene and it would start snowing so we knew we were going to lose one of our locations and the city was not going to give us permit; then an actor can’t do it on the alternate day, so are we going to have to recast; and then action! So if you can figure out how to separate your brain and compartmentalize, it can work.

So are you ready to make more movies?

I’ve got a show I’m developing and producing and a few films; I’m shooting in Cleveland in a month … I’m excited by the prospect of new challenges. It’s not all comedy and not all straight drama. Most comedians don’t just watch comedy all the time. The beauty of working in TV is that you get the opportunity to try other things, to find things you like and what’s new and different. That’s the beauty of this crazy thing we do.