Animator Glen Keane has created some of the most timeless Disney characters of the last four decades, and some of the greatest animated heroines of our time. From his hand came Ariel from The Little Mermaid and Pocahontas, and he served as an executive producer on the 2010 hit Tangled. Keane is also credited with bringing Aladdin, the Beast from Beaty and the Beast and Tarzan to life. His 38-year career at Disney has earned him numerous awards, including the 2008 Windsor McCay Award for Lifetime Achievement in Animation, the 2012 Tex Avery Award, and perhaps most fittingly, in 2013 Keane was named a Disney Legend Award honoree for his contribution in Animation.

In the spring of 2012, Keane moved on from Disney Studios. He's living proof that illustrators who excel at hand drawn animation, as he has, can marry their skills to the digital age. In a farewell letter to his Disney colleagues, Keane wrote; “I am convinced that animation really is the ultimate art form of our time with endless new territories to explore. I can’t resist its siren call to step out and discover them.” In 2013, he launched Glen Keane Productions to pursue new projects, and one of those was his recent collaboration with Google’s Advanced Technology and Projects Group (ATAP) to create the gorgeous, revolutionary animated short film Duet.

Duet was a free download for all Motorola phones, and it's the intertwined story of girl and boy, from their birth to adulthood. Users were able to follow either character by turning and twisting their phones, exploring the environment (climbing a tree after the boy, following the little girl as she dances across the screen) and essentially directing the story as they see fit. Should you stray too far from the action, the boy and girl will patiently wait while a little butterfly takes you back to them. Even on the small screen of the phone, the marriage of Keane's lyrical, beautiful illustration and the stunning technology that allows you to explore their world was moving.

We spoke to Keane about the learning curve for his new path, where he sees the future of animation headed and what he wants to do next. 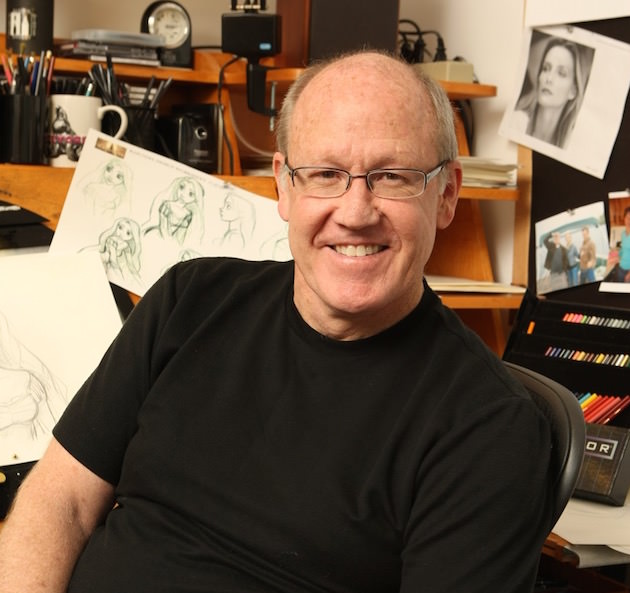 So you left Disney in order to explore the endless new territories of animation, and end up being a part of a revolutionary, interactive animated short. Guess you didn't waste much time.

I’d left Disney not knowing what I was going to do but knowing something was out there. I ended up having dinner with a couple of my buddies, including Doug Sweetland. And Doug kept talking about this animation he was doing at the time. And he couldn’t describe it. He told me I should go up and see it, so I was invited up, and Regina Dugan, who heads up this group called A-Tap (Advanced Technology and Projects), this research group found a way of creating a story in a virtual world. They showed me the phone, and I was looking at some animation Doug had done on Windy Day, the first story. My first thought was; this is such a small screen, why do I want to give up a big screen for that? Then I realized it’s not a screen at all, it’s a window into this virtual world, and I asked Regina, ‘What do you want me to do?’ And she said she just wanted me to make something beautiful with animation. I wanted to know what the catch was, and she said there wasn’t, they just wanted me to push myself creatively, and that would push them technologically.

How did you come up with the story?

Technology in some cases defines the story, and this technology immediately suggested being able to follow any way I wanted, and how I would do that with hand drawn? So I imagined two little babies, and watching them grow up, a girl and a boy meant for one another, and as they grow, you can follow one or the other, but they keep passing each other. Tosh, the boy is always going from screen right to screen left, and Mia, the girl, is always going from screen left to screen right, with the implied question of, ‘When will they ever move in the same direction?’ That simple idea led the story.

How did you come up with the look of these characters and the world?

So my son Max, my producer Jenny and I we went up to lake Arrowhead where I have a house and a studio, and started developing this little idea. At one point I’d done a drawing and gave it to Max, and when he scanned it in, he did it in a really high resolution, so it came up on his screen and it was just like this swath of a pencil line. It was star field of graphite dust, and he said, ‘That’s really cool! I don’t want to lose that!’ So he reversed it and made the dust become light, put it into space and brought it down, and gave it an atmosphere around it. And it was just this celebration of line, and we knew that this whole thing is going to be a celebration of hand drawn line on paper, which became a gigantic challenge for compression of data, because it’s much more heavy to take the data from a line from a vector in CG. CG is much lighter than hand drawn.

Because CG is about vectors, and you can predict where an arrow is going, so you don’t need all the dots in between, you just need the direction of the vector. But if you blew up a line, every line is and unpredictable pattern of dust. And they were really, really adamant that we guard the actual rough drawing. And not only that, the screen is being refreshed in 60 frames per second. So that means if you don’t animate it in 60 frames per second rate, we’re going to have half frames, and there’s going to be times when your drawings are broken up.

Yeah. Oh, that would help you wouldn’t it! (laughs) My first problem was I didn’t know how to think in terms of 60 frames per second, timing wise. My sense of timing is at 24. And they don’t divide. Then I remembered on the desk of the animators at Disney, the guys that taught me, they had metronomes, and I realized, for them, 24 frames a second was just as weird as 60 for me, because they were just inventing this. So basically what we ended up doing was around 30 drawings, shot each drawing twice, and now it’s sixty frames per second. 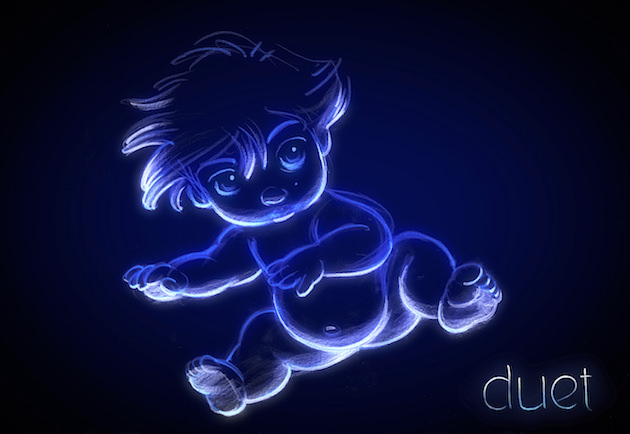 So how many drawings did you do?

We did 10,000 drawings, and those are only the ones we kept. We probably did 20,000. I had an assistant Sarah Airriess, she must have done 5,000 as well. It took from October through May or June. About ten months.

How much drawing did you have to do before you hit on what Tosh and Mia looked like?

Not a lot for Tosh, because Tosh was really my grandson Henry, he’s got this big puff of blonde hair, and I pictured Tosh like that. Mia was a little more…I was trying to figure what she should look like, I wanted her to be a girl from anywhere in the world, Hispanic or Asian or Arab, so when she’s actually doing a pirouette, you see her face is not Caucasian, so she took a lot more time to figure out. And they’re constantly growing up through the whole process, so as soon as I finish one age they grow to the next. 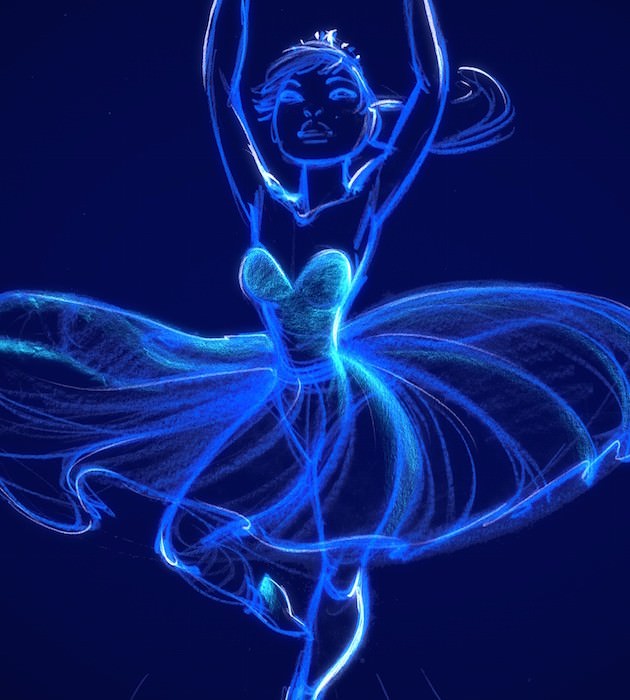 It was a little like a three-minute version of Boyhood, watching these two grow up. How did you decide on what the color palette would be, choosing blue as your main color?

That was Max, who created the first look of it, he wanted it to feel like this space, atmosphere, and my daughter Claire did the color throughout, bringing little bits of color. Claire’s got a great sense of taste in color that doesn’t overpower the line. It was always in service of celebrating the line through the whole thing.

I’d read you were on the road to directing before you had to take a break—in your dream scenario, what’s your next move?

I want to use all my skill sets. Drawing for me is essential, it’s my joy, it’s the way I express myself. I see drawing the lines you make as sort of a seismograph of your soul. I can express myself with that. But that doesn’t mean it can’t be CG. Tangled was all about trying to bring the warmth of drawing into CG. So that whole film had a hand drawn feeling to it. I think we just scratched the service, there’s a lot further you can go with that. So I’ve got an idea for a film that would do that. Potentially in CG, it could be done in hand drawn, but hand drawn needs to go in a new path.

What path do you see hand drawn taking?

When I see hand drawn I’m not thinking of it like 101 Dalmatians or The Little Mermaid, that’s a look that was created because of a technical limitation, having to paint on cells, and it’s beautiful, but we’re free to let hand drawn, thanks to the computer, become something much more personal and expressive, as if Degas was going to be animating, what would he do with this art form? Because now you no longer need the cells, you can texture pastel onto a CG dimension form, there’s a lot you can do and that’s fascinating to me. I want to take some of the ideas that we learned in Duet, this idea of visual poetry. I feel like Duet was a fresh new way of expressing story for an artist that was not linear, it was a double helix story. Instead of a straight line you had two spiral staircases and you could hop from one to the other. It was like a poem. And there was such freedom, there was no cuts, and I just felt freed from film language that was so structured, but can you speak without that kind of vocabulary? Yes. You can.