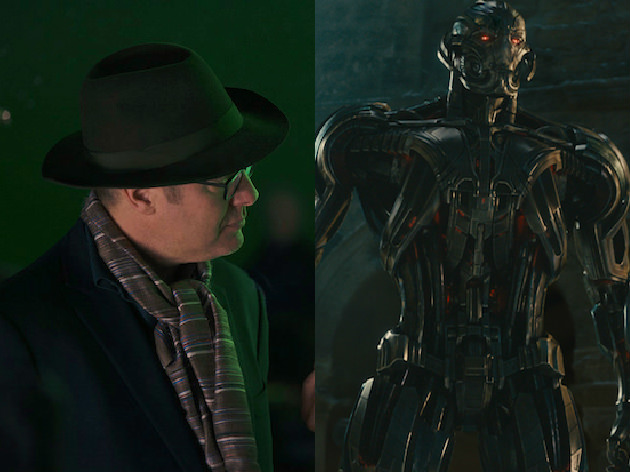 From Spader to Scarlett: 5 Great Voice Performances in Sci-Fi Films

So we saw Avengers: Age of Ultron yesterday and in an effort not to disclose any spoilers, we’ll just say this; James Spader absolutely nails his voice work as the eponymous villain. Spader’s articulate, sonorous baritone is put to perfect use, and the sound design work done to enhance his voice and give it a digital sheen was outstanding. His Ultron is a witty, wired (literally), emotional artificial intelligence, which puts him in league with a few other classic Sci-Fi vocal performances, and directly oppositional to one of the most famous of all.

So here’s a quick list of our favorite off-screen vocal work done in Sci-Fi films. Let us know who we missed.

Spader did more than provide Ultron’s intelligent, condescending anguish—he also had to do some proper physical acting in a light-sensitive, motion-capture costume while on the set of Avengers: Age of Ultron. Yet it was Spader’s voice that did most of the heavy lifting, and immediately (in our minds, anyway) put him on the list of the great voice performances in sci-fi film history. “James can do that it’s-coming-out-of-the-subwoofer voice,” director Joss Whedon told the New York Times. “And then he can do the most hilarious hissy fit and somehow make them part of the same character. As soon as I thought of him, I never thought of another name.” In one of the more inspired moments from the film, Ultron quotes lyrics from the song “I’ve Got No Strings,” from Disney’s Pinocchio, and Spader does beautiful work making these once innocent lines sound deadly.

Yup, in the very same movie we have two fantastic voice performances, although Bettany is getting the nod for his work on all the Iron Man films as well as the previous The Avengers, in which he plays JARVIS (Just A Rather Very Intelligent System), Tony Stark’s brilliant operating system that really should be considered a member of the team (in fact, Bettany plays The Vision in Ultron, a totally bad-ass new character). Where Spader delivers deep a baritone snarl and lacerating put downs, Bettany’s Jarvis is always cool, delivering a dry British intelligence to his scenes, often doing a lot of the heavy lifting of Stark’s work, whether he’s finding the crucial bits of information in a huge data download or alerting Iron Man to the fact that he’s nearly out of fuel.

Scarlett Johansson as Samantha, Her

“You seem like a person, but you’re just a voice on the computer.” So says Theodore Twombly (Joaquin Phoenix) in Her, as he marvels at the earthy voice of Samantha, his new operating system. Johansson's voice was so crucial to the film's success that researchers Juliana Schroeder and Nicholas Epley of the University of Chicago found that it wasn't what Johansson said that resonated so deeply but how she said it. "Imagine if Apple’s computer voice SIRI had been the voice of Samantha instead of Johansson," Schroeder wrote in this article for The Psych Report. "Samantha’s humanness would not have been nearly as believable, even if her words were exactly the same. Theodore would no longer seem like a man deeply in love, but a man in deep delusion." And to think, Johansson wasn't even supposed to be in Her. When Spike Jonze first shot this film, it wasn’t Scarlett Johansson’s voice he was intending to use but British actress Samantha Morton’s. It wasn’t until after listening to Morton did Jonze decide he needed a different kind of voice, coming from someone who “doesn’t have any fears or doubts or insecurities or baggage,” as Jonze said after the film screened at AFI Fest. Jonze brought in Johansson to do the work. The result is magic; Johansson’s Samantha subtly shifts from open, friendly, and doubt-free to a deeper, more conflicted, but ultimately warm creation by the film’s end. It’s incredible that Johansson managed to invest Samantha with so much life without ever even having an avatar of her appear in a single frame. "Her illustrates the same conclusion that we draw from many psychology experiments,"Schroeder wrote. "Voice – if wielded naturally – can be a powerful tool to convey presence of a humanlike mind. In Her, it was a voice that made the movie more about love and humanness than delusion and machinery."

“I’m sorry Dave. I’m afraid I can’t do that.” This immortal line, voiced by HAL, the homicidal computer at the heart of Stanley Kubrick’s masterpiece, was originally supposed to be delivered by a woman’s voice, and HAL himself was originally called Athena. By the time Kubrick was ready to film, Athena was HAL (a mashup of the words heuristic and algorithmic, which the Smithsonian Magazine helpfully explains are the two types of computer learning), and Douglass Rain gave the film’s iconic villain the perfect voice. Kubrick wanted a bland, Mid-Atlantic accent, a plain, unobtrusive voice that sounded perfectly reasonable. Rain did just that, his voice becoming the emotionless embodiment of a machine that’s so logical it becomes murderous. He's the only one on our list who remains completely emotionless throughout his performance. Rain was only given Hal’s lines instead of the entire script, and in a day and a half worth of voice work delivered one of the 20th century’s most enduring off-screen performances.

Well you knew this was coming. Perhaps the most famous voice work of all time, you simply cannot think of Darth Vader without thinking of James Earl Jone's authoritative voice. On set, Vader's voice was delivered by David Prowse, and if you can dig up the behind-the-scenes featurette that has the actor’s line readings, you’ll have even more appreciation for just how crucial James Earl Jones was to the creation of the one of the all-time great villains, in any genre. As Jones himself told the American Film Institute, Lucas wanted a darker voice for Vader, “so he hires a guy born in Mississippi, raised in Michigan, who stutters—and that’s the voice and that’s me.” Jones' voice work as Vader is perhaps the most iconic off screen work of all time, inspiring countless mash-ups, like this great piece from Slate in which Vader's most famous line of all gets spoken in 20 different languages.