From Home Builder to World Builder, Carpenter Jason Allard’s Life in the Movies

One of the most important and most highly skilled crew jobs in Hollywood is that of the carpenter, those men and women who create the scenery and props that plunge us into the physical world of the film. “It’s construction with a twist,” says Jason Allard, a man who knows how to turn a description in a script into the reality we see on screen. Allard is a virtuoso – a construction gang boss, foreman, and prop maker, with an impressive filmography that includes American Hustle, 12 Years a Slave, Moonrise Kingdom, Shutter Island, the upcoming sequel Ted 2, and the television shows Body of Proof and Chasing Life.

We sat down with this master craftsman to learn how he went from building homes to building worlds.

How did you get started?

I was working with a man in the “real world,” and he left my job to do a movie in Providence. I kept in touch with him. We hung out now and then, and then in late 2007, when I was working three days a week in construction, I talked to him. He was working six days a week. I’d just gotten married, had two small kids, so I knew I had to get in…and he helped me.

What was the first film he helped you get?

I started doing this in 2007 for a film called The Lonely Maiden, which became The Maiden Heist. I was there about a month; I knew at that point it was something I wanted to continue doing. I was doing construction, building flats, pigeon coops, crazy stuff. It was cool working on films. It was different, out of the ordinary, which was really what I liked. I’d been doing new home construction and every job was the same; every day was the same. The change was really good.

You eventually worked on Shutter Island. What was it like to work on a major Martin Scorsese film?

Shutter Island was a much larger scale from Maiden Heist. I was working outside building a concentration camp in January in Massachusetts. Everyone was complaining about the weather, but I loved it. We spent three months building that camp for the film. Then someone x-rayed the film with that scene in it, it was on Panavision film, and it got destroyed. We had train cars that we stored in the camp, and we recreated the camp on a much smaller scale rather quickly. It was impressive.

I imagine that responding quickly to to major changes is part of the job.

It’s a minute to minute job. Everything changes so fast. You gotta be opened minded and ready for anything. I played a major role in building the light house in Shutter Island. I built the exterior of the light house, which was actually 14-feet tall, the base was 30-feet around. It was out on the point of this peninsula in this affluent town north of Boston. You end up finding yourself in these beautiful places…so we erected it, but it wasn’t exactly in the right spot. Then someone changed their mind so we had to take it down and rotate it five degrees to line it up completely perfect to where they wanted it.

Tell us about working on 12 Years a Slave.

I’m a kid from Rhode Island; now I find myself out in the middle of the swamp, with algae moving around because there are alligators moving beneath it. This work brings you to these amazing places. I built Michael Fassbender’s character’s [Epps’] plantation; we did a lot of work there. That house was gutted on the inside, bare bones, studs on the inside. We weren’t even allowed to go inside because it was under construction, so we used the interior of a different house. 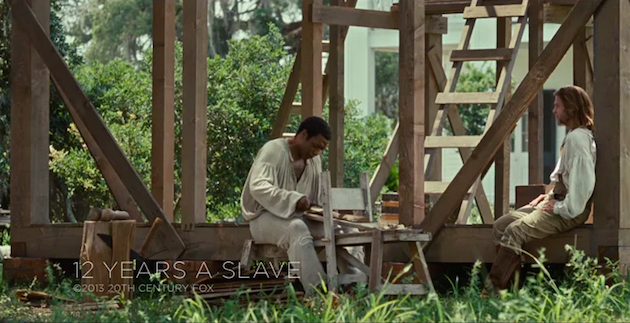 We built all the slave shacks in the shop, stood them inside the warehouse, and then we disassembled them, put them on trucks, and trucked them 50 miles west of our warehouse. Then we put them back together when we got on set.

I read the script when I was on the flight down to Louisiana. It was so good, so I immediately read the book, where there's that boat that takes them south that plays a big role in the film. We built that boat from scratch, in a parking lot in Louisiana, in New Orleans, in Metairie. We also built the whole wharf façade out in this parking lot. They came and painted that side of the warehouse blue and used it as blue screen, so in the movie it looks like there are a lot of other boats. We built everything; the yard, the mast, everything. We built it all from blueprints. The designers make a blueprint and then we make their piece of paper a reality. You have to be pretty creative at times.

Can you talk about your experience on Moonrise Kingdom? What was your favorite piece of set to work on?

You know the really high, tall tree house? I actually built that tree house. I built the exterior in the shop on the floor. Then I took it apart and took it to another building where there was a tree top waiting for me, and then I put the exterior together with the tree top, in Kingstown, RI. I then put it on a truck and drove to a cow field. When I got there they had this giant pole, two trees stacked on top of each other, anchored down like a circus tent. We hooked a crane with the tree top connected to it, connected it to the top of these two poles, bolted it through, and fused the trees together with a chainsaw. After that we bolted them through, then wrapped cable around the outside to hold them together (they painted the cables so they blended into the tree). To finish it up, we had to go up in the lift, bolted it, and then unhook the crane.

How do you work with the other people on set?

You have to be creative, and have an open mind, but you also have to be open to criticism. The set designer [Adam Stockhausen—read our interview with him here] on Moonrise Kingdom was the same as 12 Years a Slave. He’s unbelievable. He knows what he wants, but he realizes there’s a limit to reality, and some things can’t be done in a timely fashion.

It sounds like a lot of what you do is from scratch; what’s it like to work in an already constructed or existing space? Is the stress level different?

You never know where you’re going and what you’re doing. The play scene [in Moonrise Kingdom], was in a historical church in Newport. The pews are actually cubicles. One is marked “George Washington sat here,” and that was his pew. So obviously you have to be really careful; we could not disturb anything. I was covering a window with plywood to make it look a shutter, to make it look like it was barricade for a hurricane. I was informed that the window was $450,000 because it was Tiffany glass. That was probably the most nerve wracking place that I had to work in.

We actually made a stage in there, temporary walls, free standing. We erected it over the pews, and nothing touched the pews, no screws, no bolts. We used a half dozen clamps to hold it all together, to make sure it was safe because there were a lot of kids on there. You’re working in this historical building – you have to be careful when anybody is standing on your scenery, but with a bunch of kids the stress level was intense.

What is one of the most challenging locations you have worked?

While working on The Town, we built a lot of fake walls at Fenway Park, which we had to do at night because at the time the Red Sox were in the ALCS against the Angels. So we were coming in after the games while the crew was cleaning up the park, and we were putting up scenery. We were putting up fake brick walls. There are a lot of columns in those common areas, so we made columns out of plywood, and the effects team rigged them with squibs. Squibs are little explosive charges that blow up inside the foam that make the columns look like they were shot by a gun.