Behind the Controls With Chappie Drone Operator John Gore

It’s a good time to be a drone operator. As the basic devices have gotten cheaper and the more expensive ones more sophisticated, drones have proliferated, not just in the film industry but for applications like mining, surveying and search and rescue.

John Gore, a South Africa-based drone operator who has worked on nine features to date, including Chappie, The Last Face and Seal Team 8, has a background both technical and artistic: he started out working in IT. But wanderlust got in the way, and he became a photographer for the travel industry, going out to shoot glamorous travel photography.

He initially started playing around with drones to shoot aerial shots without hiring a helicopter, an expensive choice that carried an added premium due to rising oil prices.

“Over the past four years it’s gone from hardly ever seeing a drone to drones being everywhere. The whole film industry is interested in drones. It’s a new way of moving the camera,” Gore said. “With the film industry being stuck with certain tools for a long time – cranes, technocranes, dollies – when you watch a feature you see the same shots over and over. When you see a drone shot it really catches your attention.”

Pushing the industry forward involves constant innovations on the creative and technical fronts. “There are times we’ve been the first to do something new and interesting, and next week it’s someone else,” Gore said.

Drones fall into uncharted territory from a regulatory front, too. Countries are just starting to adopt different standards on drone use and drone licenses as they spike in popularity. Gore talked to The Credits about how drone technology is changing the film industry.

What kind of equipment do you use?

Drones of all shapes and sizes are used for the film industry. It could be a really small drone with a small camera, to a large drone carrying a camera with anamorphic lenses. There’s still room for helicopters. At a high level, it doesn’t replace or compete with a helicopter, and there are still things a technocrane or a normal crane can do more accurately. Drones work between the two.

What kind of shots work well with drones?

On Chappie, we did some cool stuff. We did some POV flying, the POV of one of the robot characters. It looked like a thermal night vision, and reminds me of the Predator. He’s chasing one of the characters and goes flying through the window at full speed. You can’t do that on a helicopter. You could do that on a cable cam – but it goes straight, and it takes time to set up andit doesn’t have that feel or movement and speed. Chappie also used small drones for the actors to look at, since the robot would be put in completely in post-production. That was quite an interesting use of a drone. It didn’t even have a camera on it. 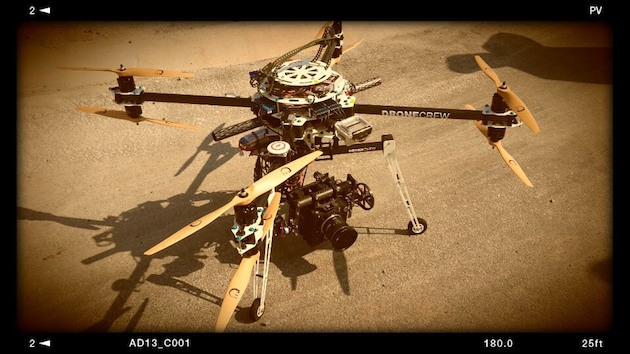 We’ve done nine now. We have a streak going with Chappie having come out and one called The Last Face, directed by Sean Penn, which just finished shooting at the end of last year. Seal Team 8 is another American movie I worked on. There, I was working with a director [Roel Reiné] who flies his own drones. He described to us exactly what he wanted. I like it when I work with directors who have a good idea of how to use a drone.

Can you clear something up? Were those aerial Planet Earth shots done with a drone?

Planet Earth used the Cinebulle, which the BBC loves, and is still being used. It’s what was used before drones in order to get a shot. It’s a balloon with a basket below it, and a little mount for the camera, and a fan behind you. As you see from the behind the scenes footage, there is some control, but they end up in a tree quite often.

What kind of new techniques have you introduced?

We recently worked on an Australian show shooting in South Africa, I’m a Celebrity Get Me Out of Here. We used a remote zoom lens, so you can shoot wide shots and go into tighter shots without having to land the drone and change out the lens. Drones are still very new. I don’t think there’s anyone who can say they’ve completely mastered it. Space travel’s been done, and it can feel like there’s hardly anything left to invent. This is the next frontier, which is very exciting, and there’s a great crowd of people around the world who are pushing it forward. 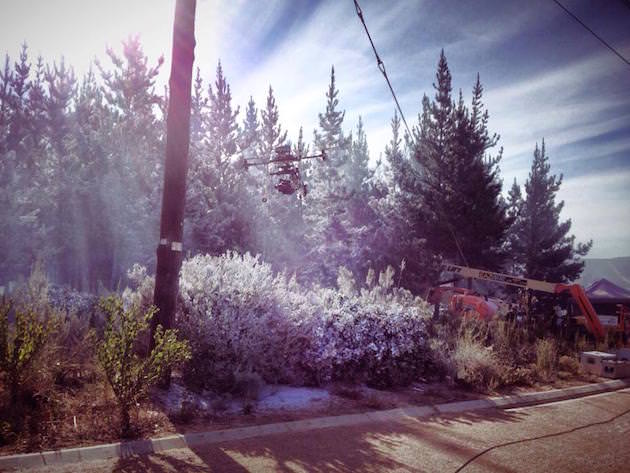 What kind of improvements have been game changers for drones? What’s on your wish list to make drones better?

Over the last few years technology really has improved in leaps and bounds. By 2012 systems started to become stable and reliable enough to start carrying bigger cameras responsibly. We built our own octocopters, which have eight propellers, so it will still fly safely if a motor fails in flight. In early 2012, we started seeing really stable Gimbal systems. They also have a two-person camera control, where a pilot flies the drone and a camera operator moves the camera gimbal independently. That infinitely creates new degrees of complexity and control. Drones are now getting to a point where a third person can be added as focus puller, controlling focus, iris and zoom of the camera.

What kind of cameras can you put on a drone?

In the high-end Alexa camera range, those are heavy. You need a very big drone to carry an Alexa because it’s 30-pounds, and then you start getting to the complexities of a full size helicopter. More than 50% of work is RED Epic. It’s the most popular camera because it’s a modular system. You can strip it down to a small camera body, put a lens on it, and it’s only eight to ten pounds, which, if you’re a drone, is a reasonable size. It’s fast, mobile, it can fly through windows, across trees, chase cars, all because of the size.

What about when drones crash?

I have a folder on my computer of crashes, because it’s fascinating. I’ve found that 80-90% of them are pilot error. It’s a bit of a human nature thing, boys with toys – you think, this is awesome, and then you crash into a tree. Once you’ve gone through that, and you’ve been doing it a bit more, you can start pushing it a bit more and operating closer to people, because you know you’re a safe reliable pilot and your equipment is proven. 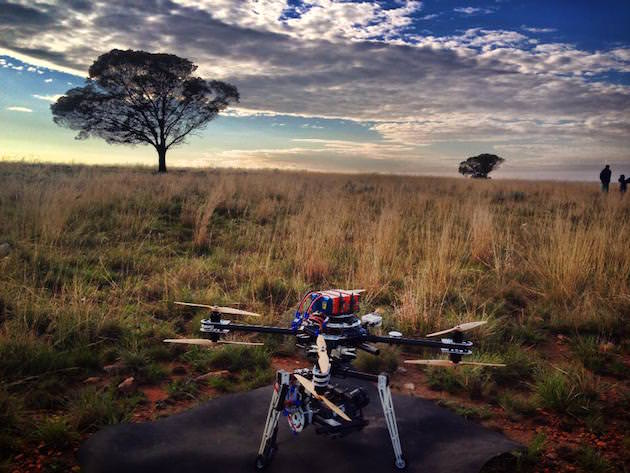 What are you seeing in terms or drone regulation?

Unfortunately, it’s one of those cases where the technology is growing faster than the regulations, and this is an international problem. Here in South Africa, we were able to get permits. Regulations are coming. Most of the countries in the world at the moment are working on regulation. Some are scared and have banned drones, others are waiting to look to see what happens in the States. We’ve been part of a technical workgroup and subcommittee that’s been working on creating regulations for drones in South Africa (RPAS) that should be in place soon, making it possible to obtain a drone pilot license, and register your company for aerial work. Each operator will then be legal, and very aware of what one can do and what you can not do within the framework of the new regulations. To put it very simply: if you want to drive a car, you have a license, and if you want to operate a drone, get a license. In the near future commercial operators worldwide are all going to have licenses, and you’re going to see a lot more professional operation separated from hobby use.

What’s your take on the FAA’s recent approval of certain drone uses?

At the moment, there has been special permission for certain drone operators in Hollywood, through 333 exemptions. Several operators got a special license, and those operators have professional pilot licenses for full-size aircraft, which is unnecessary and not applicable to drone operations. In the absence of laws specific to drones, full pilot licenses made sense in the interim. More recently, after a small drone crashed into the White House, the FAA seems to have really picked up the pace, and has released new proposed regulations for drones.

What’s ahead for drones?

I think in the next few years, we’re going to start seeing how almost every shoot is going to have a drone for one to two days. The directors are going to understand this tool a lot more. At this moment, drones might not be the first choice. Maybe they would have preferred a helicopter, and they’re using the drone to cheat another shot. Now we’re seeing directors come to us who say, ‘I want to create this shot, I’ve used a drone before.’ It’s changing the narrative