Novelist-turned-screenwriter Alex Garland knows how to create strong characters that are trapped in inhospitable and oftentimes dangerous situations.

In 28 Days Later (2002), his characters were faced with the outbreak of a disease that was turning people into zombies. In Sunshine (2007), his characters were sent on a dangerous space mission to prevent the destruction of the human race. In the remake Dredd (2012), his main character was trapped in a criminal’s lair and forced to fight through hundreds of thugs eager to end his life.

In Ex Machina, Garland’s latest film, one of his main characters is caught in another dangerous situation but has a unique problem that few onscreen characters face— she can be shut off.

Garland makes his directorial debut with this science fiction drama about a reclusive internet pioneer (Oscar Isaac) who has been experimenting with artificial intelligence. The multi-millionaire invites Caleb (Domhnall Gleeson), one of his employees, to a secret facility to test his latest creation: an artificially-intelligent machine named Ava (Alicia Vikander), who longs to escape her manufactured world.

I recently talked to Garland about the production of the new film and the work that went into creating Ava. Below is a slightly edited transcript of our conversation.

When you originally had a vision for Ava, what were the most important physical attributes you wanted her to have?

I'd just come off the back of this film Dredd and you always react against the thing you were just working on, and in Dredd, the protagonist has half his face covered the entire movie. In some ways, that's kind of cool and fun but also after you've done a whole movie like that, you don't want to do it again. So the first thing I knew was that Ava had to have a completely human face, and all the nuances that the actress wanted to put in there, we needed to be able to capture so right off the bat, that was the starting point. 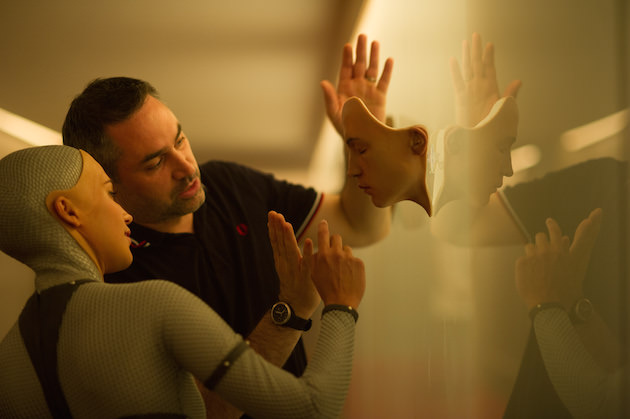 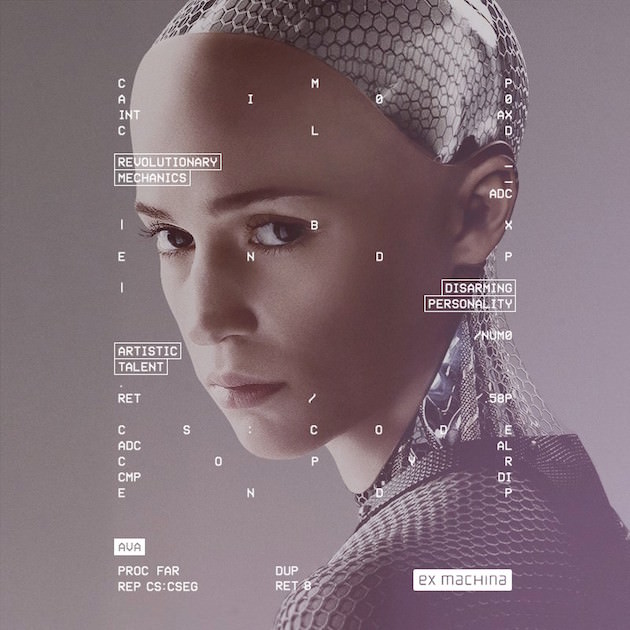 But then there's a bunch of other things like she had to be very obviously a machine. Maybe she could be a girl wearing a robot suit, because then the story would carry this floating possibility that, ‘Hey that's not really a robot,’ so she had to unambiguously be a robot. So the first time you see her, there's no doubt about what she is, but also the mesh — there's mesh over her — so the way to make sure that she seems like she's a machine is having these missing sections of her body which, if that was a human, they'd be dead cause they'd have no internal organs. So you clearly demonstrate that, but then the mesh over that form means that even though you can see she's a machine sometimes the light will glance off her leg or her midriff and you'll see that she has the shape and the curves of a girl in her early 20s. As soon as you see she's a machine, you also start pulling away. Your sense of her gets pulled away from her being a machine.

You worked with Jock, the well-known comic book artist, to create the design of Ava. Can you talk about that experience?

Jock and I worked out the design together, so we just sat down and over two or three weeks and hashed out ideas and eventually got this. Well, at least we got a certain way down the line and then the VFX (visual effects) team also got involved and continued the process.

Were there any major changes to Ava from your original visualization of her to what the VFX team could come up with?

No, the VFX team were able to do everything we wanted. The truth is with VFX these days, they could do anything. Anything you think of, they can do.

So you just shot it with the actress in there and added the effects later?

Yeah, [Garland points to the poster of Ava nearby] see this grey thing on her shoulders and here on her hips. She was wearing that over her whole body. It's like a Spider-Man suit, and then what they did was they swapped out sections of her body. 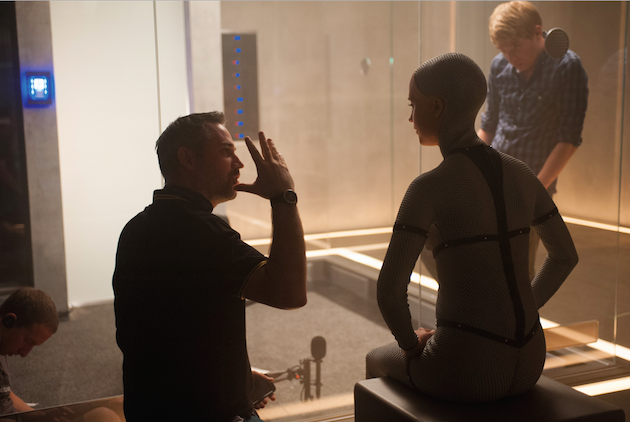 How did you prepare Alicia for shooting her scenes knowing that her body would look completely different onscreen?

To an extent, it was a leap of faith for Alicia, but what we did was we took a still photo of Alicia wearing her suit and then the VFX guys took that still photo and showed how it would look onscreen, so she could carry that with her. Even though she's walking around the set looking like a gray Spider-man, she can check the photo and know ‘Yeah, that's where I'm gonna end up.’

How did you choose the setting for the film?

It was shot four weeks on a soundstage just outside London — a set in other words — and two weeks on location in Norway where we found a house and a hotel that were designed by the same architect and geographically quite close to each other so we could shoot there and feel like it would have the same aesthetic. Then we could build sets back in London that felt like they had the same aesthetic. So anything in the film where there's a view out the window and you can see greenery or a river or mountains, that's for real. That's shot in Norway. 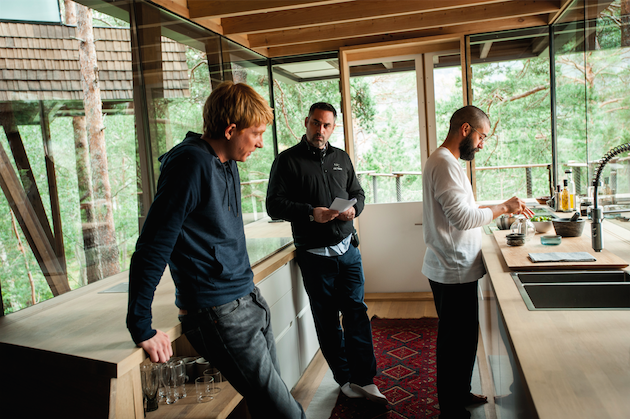 How did you get the look of Ava to match so well with the locations you chose? 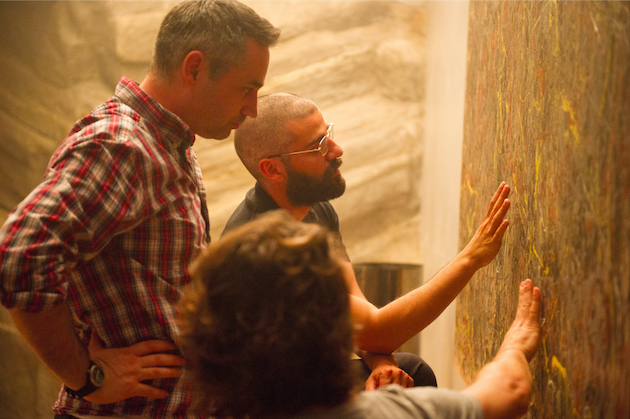 Even more amazing is that the design that the VFX guys do on their computer, because of this technology, we can do 3-D printouts of Ava — of her machinery — because they've effectively designed exactly the dimensions of her spine and her organs and the ribs and stufff like that, so that could get fed into a 3D printer and then I have, at home, a life-size set of parts of Ava's entire body. It's really cool. 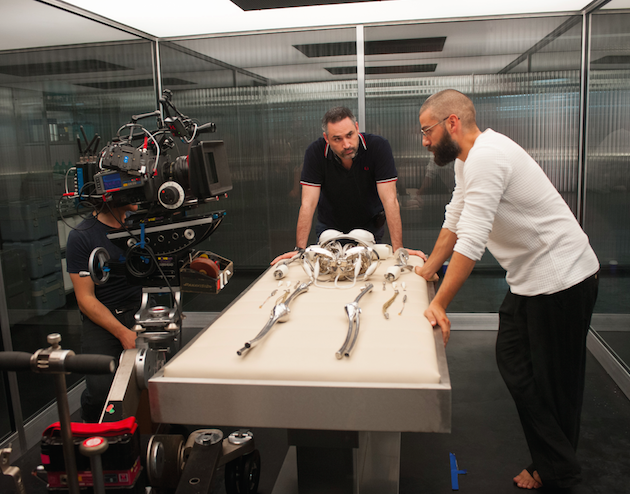 I’ve heard that there was some tension on set that helped created the tension seen in the film. Can you talk about that?

I've worked on films with fucking tension where people were at each other's throats more than once so I know all about tension on set. This tension was like a creative tension. This wasn't people wanting to strangle each other. This was like people who were sparking off each other so it's kind of like a heat rather than a tension, I would say and it was mainly between Oscar Isaac's character and Domhnall Gleeson's character and the reason is because these two guys are fighting each other.

What was the most difficult part of filming?

The hardest part of the whole production was effectively the casting. From that point, this was like the easiest production I ever worked on like by miles. The people on this film are a team. We've worked on several films together. We know each other really well and some people were new to that team like Rob Hardy, the director of photography. He just fitted in perfectly. It was a fun happy shoot with a good bunch of people.