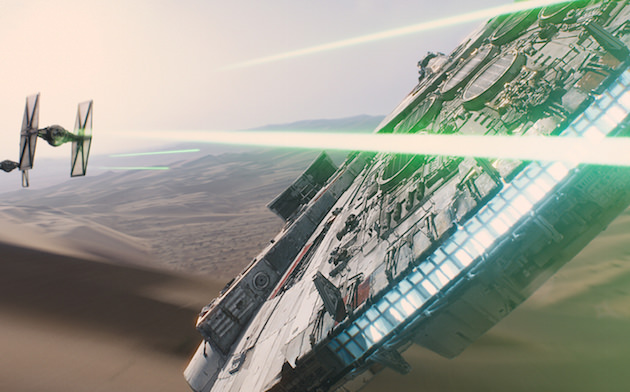 Oh man, so that happened. Once the trailer was released at the Star Wars Celebration yesterday, a not insignificant portion of the global population went a little bit nuts. It appears what our country has needed, a way to achieve a sort of psychic release, was by giving people what they’ve always wanted—Chewie and Han Solo. Honestly, wow. For all the great little easter eggs in that trailer for Star Wars geeks, and even casual fans alike (you have to hand it to George Lucas and his production design team from the very jump—even all the years later, those Storm Trooper uniforms, slightly tweaked in the new film, still rock),  it was the sight of an ageless Chewie and a much older, more shaggy haired Han Solo that made our heart go a little woozy. There really is something emotional about it, right? For those of us who were kids when the original trilogy came out, it feels oddly, but concretely, circle of life-level poignant to have Han and Chewie back for another ride.

Anyway, the trailer has been parsed and dissected by many an eagle-eyed reviewer (we particularly liked this emotional, shot-by-shot reaction by Vulture’s Abraham Riseman), but here are five questions we have after giving it a few dozen views.

1. Is the image of the crashed Star Destroyer, at 29 seconds in, only super friggin’ awesome for Star Wars fans, or, is it objectively a beautiful, haunting shot? Discuss.

2. Can we all agree that the melted Darth Vader mask is the Halloween mask of 2015? It's not even going to be close, right?

3. Also, in Luke’s narration (it’s Luke, right?) about the force, he says my father “has it.” Present tense. Is Darth Vader coming back in some way, Obi-Wan style, as an apparition in The Force Awakens? Lots of people have wondered about this, including Entertainment Weekly.

4. Can droids fall in love? Because honestly, if so, tell me you wouldn’t do anything it takes to go to the wedding of R2D2 and BB8. Watch how BB8 rolls right into your heart at the 1:10 mark! Sigh. (Where art thou, C3P0?) Also, cool factoid; BB8 is not CGI in this film, it's a "live prop," which was a part of J.J. Abrams mandate to have more practical effects in the film.

5. What’s that giant red and black flag at about a 1:13 in, behind the Storm Troopers? This is the kind of fascist creepiness that the Imperial Forces are so good at.

6. What does it mean if you’re a silver Storm Trooper? Obviously you’re a step above a white Storm Trooper. And the cape? To dress for the job you want in the Star Wars galaxy, you wear a cape.

7. How old is Chewie at this point? Is he roughly Han’s age? The Star Wars wiki says that Wookies live to be about 400, so Chewie’s definitely on the young side. If he's the same age as Han, who we'll say is the same age as Harrison Ford, he's 72. But 72 for a Wookie is like, what, five and a half percent of his life span? So in human years, Chewie's about four years old. (Editor's note; we're just terrible at math.)