5 Interesting Choices Made by Cast & Crew in Skype Horror Unfriended

There are few things creepier in life than an unexplained, unwanted intrusion on our privacy. In the pre-internet era, the phone was the communication medium of choice for sadists to torture their victims in films. When a Stranger Calls (1979) revolves around that phone call from the titular stranger to a babysitter named Jill (Carol Kane), asking “have you checked the children?” Spoiler alert; the police trace the call and tell the babysitter the call is coming from inside the house. Fast forward to 1996 and the fantastic opening sequence of Scream, in which Drew Barrymore essentially resurrected her career in one breathlessly terrifying scene.

In Universal’s upcoming Unfriended, directed by Levan Gabriadze and written by Nelson Greaves, the medium has been modernized and the intrusion is now taking place over Skype. The conceit of Unfriended is this; someone posted a shaming video of a young woman named Laura Barns (Heather Sossaman), drunk and passed out. The reactions of her peers to this video are reliably brutal. Three days later, she kills herself…the video of her suicide is posted online as well. On the anniversary of her death, Blaire (Shelly Hennig) and her boyfriend Mitch (Moses Storm) are having an intimate video chat over Skype. Then they're interrupted by their friends, and the group is chirping happily away until an unknown user, going by "Billie227" wants to join their video chat. Eventually, our friends find out that "Billie227" makes the malevolent spirit in Paranormal Activity look like Casper.

Developed and produced by Timur Bekmabetov (Wanted), Gabriadze, Graves, and their cast and crew essentially created a production that mimicked their film’s conceit. Here are five interesting facts about the way the filmmakers chose to efficiently and effectively shoot their low-budget horror flick.

1. Cast members were physically separated during filming just as their characters were.

Each cast member was given their own room in a house in Santa Monica where they would act out all their scenes in front of their own desktop computer, alone, mimicking the plight of their characters, who were each in a different house in a different town, talking, and being tormented, over Skype. Without any clear cuts, the filmmakers said this method made this more like filming a live play, with some takes going on for nearly half an hour. The crew communicated with one another using GoPros, which were also used to capture the performances of each actor as they interacted with each other over their computers.

“The script is structured like an 85-minute play, so we did long takes, including a few that were the full length of the movie,” says screenwriter and producer Nelson Greaves in the production notes. “We have these actors who are trapped in separate rooms for this period of time, not speaking to anyone—except into the GoPro. You get to a place of truth that is so beyond what you could get if we did it in multiple takes and breaks. At the end of 85 minutes, the cast is seeing these things happen and they’re so in the moment that these reactions couldn’t have happened otherwise.” 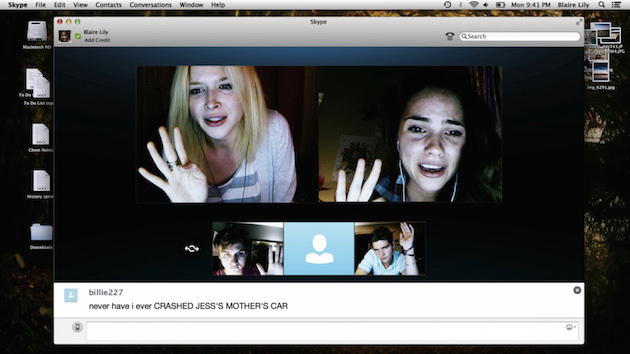 2. Actress Shelley Hennig got the idea to shoot the entire movie in one sitting—the filmmakers agreed.

Considering they were filming everyone's scenes in that one house, and all the rooms were dressed and lit, Hennig suggested that they could run through the script from start to finish. So that’s exactly what they did, starting with page one and going through until the end. During filming, each actor wore an ear piece so Greaves and Gabriadze could give them notes as they were filming. As the actors interacted over Skype, the writer and director would offer suggestions on how to play things differently, who to pick a fight with in another room, and how to tweak their reactions to the horror unfolding, in this case literally, all around them. 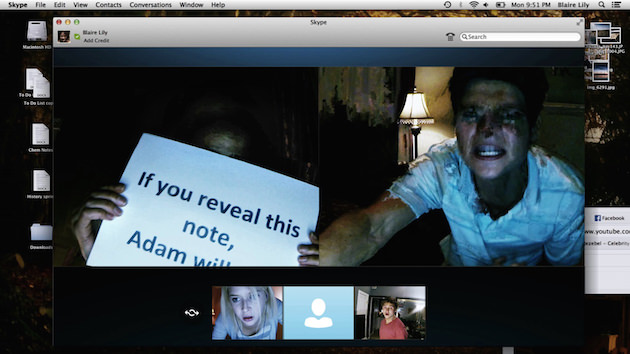 3. The actors often found out what was happening to another character in real time, just as viewers will.

The filmmakers decided to keep their actors in the dark about many elements of the film. Because so much of the film was improvised, the filmmakers would find a certain piece of dialogue or reaction inspiring, and move in that direction. They rarely told the other actors what was going on, so they’d be seeing one of their fellow characters on their computer screen doing something totally unexpected and react naturally. Because their only interaction with outside production was through their computer and the earpiece, the actors said they sometimes forgot they were on a movie set.

4. The editors didn’t just cut what was filmed, they created new scenes themselves.

Editors Parker Laramie and Andrew Wesman began with a rough cut of the film, which was essentially a six-screen split of the webcams. Then they went through each of the six video layers from those GoPros and began finding ways to thread them together. Because the film is told primarily through Blaire’s perspective, everything had to be timed perfectly to her experience on her computer. Wesman explained that the filmmaking style meant the entire thing is “essentially one big 90-minute visual effect shot,” adding there’s no nonlinear editing software that’s designed for such a task. Yet this limitation once again provided an advantage—it gave Wesman and Laramie the ability to create new moments from on-the-spot computer screen captures, which meant making brand new sequences or plot elements in post production.

5. The computer mouse became a character

The filmmakers found that the computer mouse could also function as a kind of character itself. Wesman says that “The ‘performance’ of the mouse could determine one’s entire reaction to a scene, in the most subtle of ways…things like how long the mouse hovered over a certain word or the speed with which the mouse moved from one button to the next can tell an intimate story in a way that is totally unique to this medium." He said that a good story "features an active character constantly making decisions,” and because we are watching this film primarily through Blaire's computer screen, we are able to watch her decision-making process with every word she types or deletes. “Initially, it was challenging to create a sense of dread and horror on a computer screen, but I soon realized that the experience of using a computer is so relatable and so personal that it connects readily with our everyday fears of exposure or the unknown.”