For Chappie, the visual effects weren’t there to complement the story. They made the story.

“There are huge visual effects movies out there that have lots of explosions. That isn’t this movie,” said Chris Harvey, visual effects supervisor. “[Director] Neill [Blomkamp] shot it all on location without any kind of stage work, so we didn’t do environment [creation] work on this movie. There are no big explosions or destruction scenes. The visual effects work was focused on the creation of those robots.”

Chappie had to move as a robot would, but he also had to emote throughout the 1,000 individual shots he was in that spanned 75 minutes of the movie. It took 200 visual effects artists and a year in post-production to bring Chappie to life.

“We had to make sure the audience 100% believes in him and emotes with him and get pulled into his personal journey, which is learning what is means to be human,” Harvey said. “That was the big challenge. You can’t get away from the fact that it’s CG, but you want people to forget about that and accept this character in the film as you would a human.”

Chappie is a crime-solving robot created by a robotics designer (Dev Patel) that’s more human than most, especially the strict police robots created by Dev’s rival robotics counterpart, Hugh Jackman. Two criminals, unable to carry out their work, get the bright idea of stealing such a robot and programming it for a life of crime.

Robots shouldn’t have a moral judgment about what’s good and what’s bad, but as it turns out, Chappie does. “His morals are stronger than human morals. He starts as a child, and goes through his adolescent years, goes through a series of ordeals where he’s misunderstood, and has to make choices about what path do to take: a path of revenge or a path of forgiveness,” Harvey said.

When creating Chappie’s look, the team wanted to keep him as true-to-life as possible, with no extra finishes or flourishes that didn’t have a purpose. His face has a bar on the brow, a bar on the chin, and eyes. With those three things alone, Chappie expressed emotion. 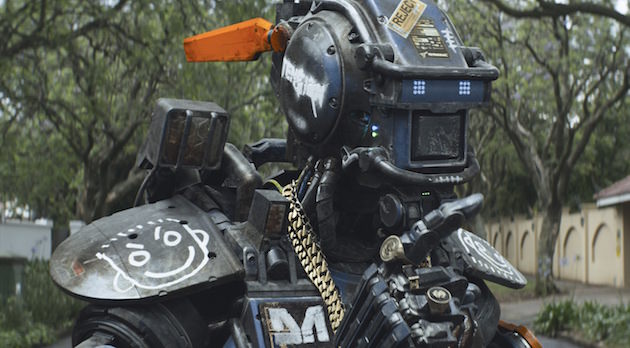 “With Dawn of the Planet of Apes, the apes have a similar physiology to us. They can emote through their face just like humans can, their cheeks move, and there are things that humans naturally pick up on,” Harvey said by way of comparison “Chappie’s face is a robot. “He doesn’t have a ton of moving parts, and we didn’t want to cheat with him.”

Early tests showed that audiences resonated with Chappie based on facial performance and body language alone, giving the team confidence in its restraint. 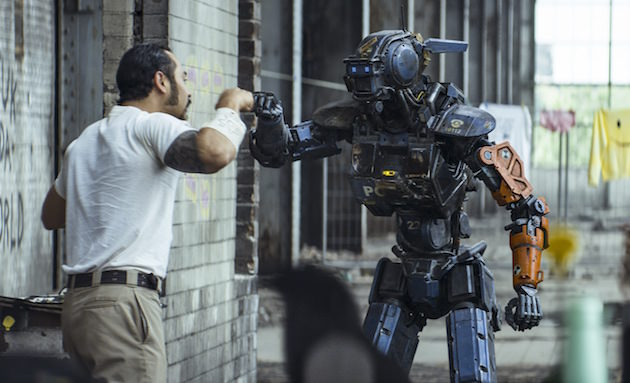 While performance capture – used in Apes – is all the rage in Hollywood, Blomkamp went for another method. Sharlto Copley acted on set to give the robot a physical presence for the actors. Using key framing, visual artists translated his movements into CG, and removed him from the scene frame by frame.

“We felt the performance capture route would impede the creative process on set, we wanted to let the creativity flow. Neill has a very fast shooting style,” Harvey said, and sometimes shoots in unsafe South African locations where they must shoot quickly and move on.

Even when robots flew, Blomkamp wanted to create a physical presence on set. He did that with a drone, which flew across the sky as actors traced its movement sightlines. Visual effects crews then replaced the drone with the actual robot in post-production.

Harvey spent time on set to gather data to inform the visual effects process. For every shot, he would take 360-degree photos to envision the space and capture lighting sources, a technique called “photo surveying.” Those photos would be input into a system to create a 3D version of the set.

He would also record the lens, focus distance, camera height and placement used for each scene, as well as distances between different points in the set. Copley wore a greysuit on part of his body, so the team could take that information to light the reflective metal frame of CG Chappie. 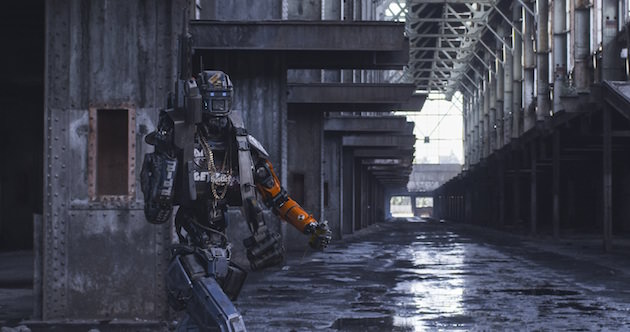 Visual artists looked at Copley’s performance frame-by-frame and translated his movements into the CG Chappie as they erased the actor out of each shot. “There are some very talented artists who spent a lot of time erasing Sharlto out of these scenes,” Harvey said.

Visual artists didn’t just create one Chappie, they created almost two dozen versions as the character gets scuffed up, repaired, and then scuffed up again. Different weather even required a new Chappie.

“There’s a scene where Chappie learns what it means to die. He’s looking at a dog, poking it, it’s not responding. He doesn’t understand why it’s not moving,” Harvey remembered. “We hadn’t budgeted for a wet Chappie, but it ended up working so well for the scene, with the rain enhancing the emotional impact, that we came up with a whole new version of Chappie that was wet.”

Harvey counts as his favorite scene a long take that slowly pushes into a close-up around Chappie’s face. “There was an incredible level of detail in the asset. 400 individual bolts and screws, 160 wires, good lighting. We were pushing as hard as we could technically. It helped sell the physicality of him, and made him real,” Harvey said. “And the end goal was to deliver a character that was endearing and that you connected with on an emotional level."