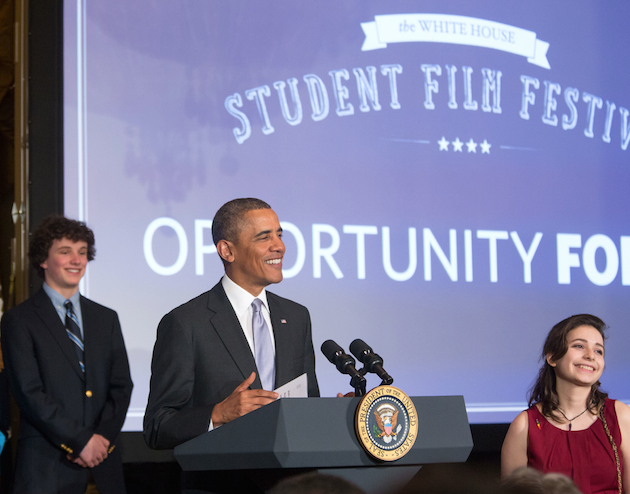 The second annual White House Student Film Festival takes place today at 1:00 pm EST. You can tune in and watch the festival live here. As we did last year for the festival's inaugural run, we reached out to Adam Garber, the deputy director of digital content for the White House, to learn a bit more about this year's program, which is focused on the theme of giving back. During the festival, the President will announce a new "Call to Arts" initiative, enlisting professionals to help young artists around the country.

How has the past year's events, on a national level, shaped the theme of this year's student film festival?

I don’t think that there was anything specific to the past year that led to the theme. It really came from a desire to showcase what young people are doing in their communities and have been doing year after year. Schools, especially High Schools, have a tradition in this country of encouraging volunteerism and service activity. So, that was certainly part of coming up with this years theme.

How is the decision making process handled? Were there favorites that were close to making it last year that just missed the cut, and can those kids re-submit new films?

Kids who were selected into the film festival last year could certainly submit a new project, as long as they meet the requirements of being a K-12 student. Some of last years participants are now college freshman, and have contacted me, saying that they are happy to see we are having the event again, but bummed they no longer can submit.

As far as the decision making process, that was done by White House staff and members of The American Film Institute, with whom we are once again collaborating with.

There were a lot of favorites that didn’t make it to the screening at the event, but we were able to still showcase them on the White House youtube channel via this playlist. (Check them out here.)

Has there been an historical precedent at the White House for these kind of engagements with children? And if so, how has the current administration built upon or learned from those?

Before last year, I don’t believe that there has been any event like this. One event that comes to mind as only slightly similar is the 'Kids State Dinner' that the First Lady has held the past few years here in the East Room. That gives kids from across the country the chance to come and have lunch with the First Lady at the White House through a healthy recipe contest, dubbed 'The Healthy Lunchtime Challenge' There is a cool site for that event here. There is also a poster contest for the White House Easter Egg Roll.

How many films get submitted, and do you notice any regional trends in their style or storytelling methods?

Last year we received over 2,500 submissions, and most submissions come into us over the last three days or so. Generally, there was no regional theme to submissions. I did realize that kids in colder climates had to shoot indoors more, but there were some great submissions that made use of the winter landscape that their locale afforded them.

How was the decision reached to make this year's theme about service and giving back?

We made it pretty quickly after having last years event. We realized that the ways that kids, young and old, were choosing to be a part of their communities and give back through service opportunities would be a great theme. Students can make documentary type films on the subject, but it certainly leaves a lot of space to make some great creative pieces of fiction.