Sony Pictures Television’s president Steve Mosko recalled the reaction of some of his fellow executives when they were preparing to green light an oddball script some years ago. The story was about a high school chemistry teacher with terminal cancer turning to the production and distribution of crystal meth in order to support his family after he died. Not only was this premise completely baffling to some of Mosko’s colleagues (wait, the protagonist is going to die? He sells meth? And hold on, it’s the dad from Malcolm in the Middle??), so was the intended television channel that was going to run it—AMC. “You mean the American Movie Channel?” his colleagues asked. It was all just so odd. But of course we know it was also television history in the making, a phenomenon that made careers and, perhaps even more incredibly, made the city of Albuquerque a hot destination for reasons other than the temperature. 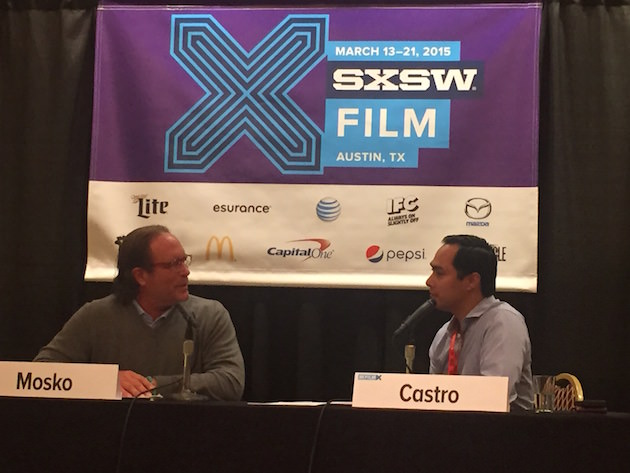 Now Mosko has Breaking Bad’s companion series on his slate of productions, the terrific Better Call Saul, not to mention a slew of upcoming shows on various networks. Mosko sat down with Congressman Joaquin Castro for the MPAA-sponsored panel “The Future of Viewing,” and that future includes some of Sony TV’s programs like Powers, an intriguing series coming to Playstation. The show centers on Christian Walker (Sharlto Copley), a former superhero of sorts (he could fly, but can’t any longer) joining Deena Pilgrim (Susan Heyward) as they investigate cases involving people with superhuman abilities, known as “powers.” If you’re still suspect that a game console’s channel could be the home of a great new show, just look at the rest of the cast—character actors like Noah Taylor (so memorable in everything he’s in, like his guest starring role in Game of Thrones), the multi-talented Eddie Izzard, and the compelling Michelle Forbes (In Treatment, The Hunger Games: Mockingjay Part 2)

SPT is also behind Jerry Seinfeld’s Comedians in Cars Getting Coffee, which streams on Crackle, and reliably delivers the funny (and often takes place outside of cars, sometimes on boats) with guests like Amy Schumer, Tina Fey and Jimmy Fallon.

Sony TV, with Mosko at the helm, is sitting in a pretty sweet spot. They have a proven track record for producing kick ass shows, they can attract the best talent in the business, and they can get their work in front any number of channels, both online and off. Sony TV is currently working with 15 different networks, which allows them to go to someone like Vince Gilligan and tell him that they can pitch his idea to everybody. The TV landscape is changing so dramatically that Sony TV was able to help move the beloved Community from NBC to Yahoo!, ensuring that Dan Harmon’s quirky, singular sensibility will continue to have a home.

Things really clicked for Mosko and Sony TV with Shawn Ryan’s dark, compelling drama The Shield, which aired on FX. This was their first great scripted show on basic cable, and it paved the way for writers, directors and actors who, at the time, still considered TV a step down from film. After Michael Chiklis won an emmy for his meaty role on The Shield, Sony TV was able to land movie stars like Glenn Close and Rose Byrne for their series Damages, and talent from the film world began realizing that the quality of the storytelling on television had become undeniable. What actor wouldn’t want to be Tony or Carmela Soprano, Walter White, Olivia Pope or Cookie Lyon?

The TV business is fueled in large part by international markets, which Mosko says account for some 60% of a show’s revenue. Sometimes this leads to quirks, like Kevin James, formerly the star of the show The King of Queens, being a huge, huge phenomenon in…Germany. Mosko recalled that James’ allure to Germans is such that, during a publicity tour in the country for the movie Hitch, the locals went totally berserk when they saw him passing by in a car, calling out his name and straining to get a look at him, essentially ignoring the man sitting next to him, Will Smith.

The ability to watch or stream shows, often all at once, is something the TV industry in general and Mosko and Sony TV in particular have come to see as a huge opportunity to get more great work in front of more people. It creates opportunities for a more diverse collection of storytellers when your show can air on a network or a website, on a TV or a iPhone. This also puts an enormous amount of pressure on studios to protect their artists’ work. Mosko recalled the incredible stress before the final episode of Breaking Bad was aired, with the threat of someone pirating it and leaking the ending to the world a major, major challenge for them. A single episode of a television show can go to a hundred different vendors before it can air—the post production process, which includes things like color correction and sound editing, require many different people to work on it. This means that at any point along the chain an episode can be leaked, and when it’s the final episode in one of the most beloved television series in history, the damage would not just be economic but also artistic and emotional—the years people invested into the story of Walter White could have been soured by a single leak and headline referring to his fate online.

Mosko and his team unpacked every step the final episode would take, employed safety measures along its route, and worked with international distributors to try and air the finale as close to the American airdate as possible. He believes that the attention Sony TV paid to getting the Breaking Bad finale safely from one point of the post production process to another helped them stave off a disaster. This level of scrutiny should be business as usual for everybody to protect the work of all the people it takes to create a single episode of a show.

Speaking of Breaking Bad, Mosko still marvels at the ripple effect the show has had, from the expansion of that fictional world with Better Call Saul, to the way the show put Albuquerque on the map. For every episode in Breaking Bad’s run, Mosko says it pumped about $2 million into the city. With the talent flowing into TV, the question isn’t if another show will have this kind of impact, but how many, and where might they take place, and what formerly unheralded city might become the next Albuquerque? You know they’re doing something right in the TV world when a show’s creator has to beg people to stop acting out a scene from his show, in the case, the throwing of pizza onto Walter White’s roof, which is an actual house owned by an actual person.