In America we call them projects, and they’ve been the locus of many crucial, incredible films, quiet a few from Spike Lee, including Do the Right Thing and Clockers. They’re called favelas in Brazil, the setting for the Fernando Meirelles and Kátia Lund’s explosive City of God, while in Britain they’re called estates. These are places where large groups of lower income families and individuals, often minorities, are grouped together in sprwling, government-built housing complexes (or, in Brazil’s case, shacks and shanties.) This is where writer/director Rebecca Johnson has been immersed for the past decade, in Brixton in South London, getting to know the people (and mentoring many of them) and their stories. Johnson’s first feature, Honeytrap, is the culmination of this hands-on, compassionate emersion. It is the rare feature film set in the milieu of gangs that is told from the perspective of a female.

Layla (played by the exceptional Jessica Sula) has just arrived in Brixton from Trinidad, returning to her estrange mother and finding herself in a strange world with codes and mores she doesn't yet understand. Her mother's unsupportive, and her fellow female classmates don't like her, either. She befriends a young man, Shaun, who is, much like her, an underdog. Eventually, Layla catches the eye of the local alpha male, Troy (Lucien Laviscount), who romances her and brings her into the inner circle of their social world, granting her the status and power she covets. Layla is his "Trini princess," a position that suits her well. When he dumps her, Layla’s determination to win back Troy, at whatever cost, makes her a one-of-a-kind film protagonist, a young woman who will stop at nothing to restore the status and power she once had. She's a character that Johnson worked on for years until she had the character right.

We spoke with Johnson by phone from Brixton, before she was set to fly down to join us here in Austin. She has made as vivid a portrait of life in a British estate as her contemporaries in America, Brazil and elsewhere could hope to create.

Where did the story of Layla come from?

I’ve been making films with young people in Brixton, where I live, for the last decade. I’ve been in that culture, that world, mentoring young people and being allowed into their lives in a way that’s quite unusual, really. One doesn’t otherwise develop such strong relationships with people so much younger than yourself. I made some really strong attachments, and I felt very strongly how hard it is for them.

Your film is in many ways analogous to what happens here in the States, where young kids get demonized as “gangsters,” when they’re actually just confused, often overwhelmed teenagers.

I think it’s harsher in the states because you have less in the way of state support and more guns, but I think one of the key facts as well, which is the same here, and pretty much most of the world over, is there’s such an emphasis on status. I’m sure there always was, but our media machine is pumping out the most sophisticated imagery, it’s everywhere and spreads like wildfire, and I just feel that people, young people with all their ambition and energy, who are at the bottom of the pile, they’re being told they’re nothing if they’re not rich, desirable, famous, they're being told they're nothing, and that creates a pressure that wasn’t there necessarily in Victorian times. You had enormous poverty, but you didn’t have that sort of pressure that if you didn’t make it into celebrity culture, you’re a loser. There’s this acute status anxiety which magnifies everything. 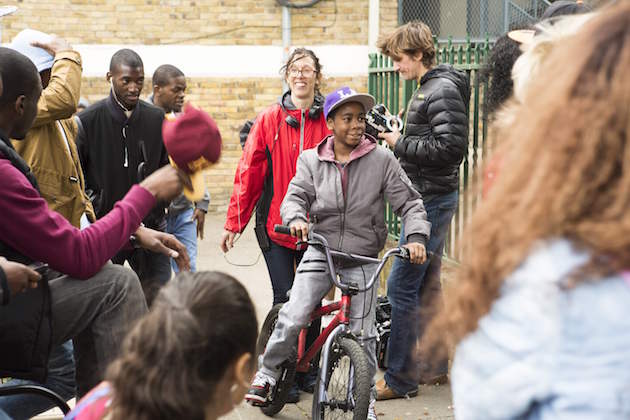 And there's the very real violence kids in Brixton and places like it face. Adolescence is hard enough without actually having to worry about your safety.

It really is a tough world they’re growing up in. In contrast to the way gang culture is reported, admittedly, these horrific events do happen, I was privy to see that they’re very, very human. They’re not hardened the criminals the mug shots would suggest, so I felt it was really important for people to see that. There’s this fear based tabloid reporting that’s very unhealthy, and I particularly wanted to tell the girl’s side of the story that hasn’t been seen before.

Layla is an utterly compelling character, exquisitely portrayed by Jessica Sula, but she’s also a very difficult central character considering the decisions she makes. Where did her story arc come from?

Being immersed in that world, then I came across this big case in South London that Honeytrap was based on. I began by thinking I’d do a documentary, then I thought of doing a dramatization of that case, but I soon realized it would be too constricting, and I had enough material and experience in that world to fictionalize it completely.

I’ve obviously written scripts before, but this was the first feature that I’ve written, and it took three years and an awful lot of rewriting in terms of making it something that would structurally hang together. My key thing really was that I wanted to make Layla a character who would take the audience with her, even as she made worse and worse decisions. I wanted you to be swept along, kicking and screaming, on her journey. You had to see she had an awful lot of things that made her life hard, forcing her into making these poor decisions. But if she was to be seen being totally weak, and being helpless, that switched you off from her.

If a character is too weak, it makes an audience go, Ugh, whatever. You have to have an idea of the will of a character or you can’t hook on. So I worked for a long time trying to strike that balance between Layla actively being this hardened person with no feelings and seeing the vulnerability underneath that pose. And I found I was sometimes skewed doing that, because I was so close to her, and I had so much empathy for her, that I was getting feedback from readers that sometimes I went too far and she wasn’t sympathetic anymore. That was the biggest challenge, to create her arc in a way which would be convincing and which you would connect with.

What was your shooting schedule like? The film looks fantastic, but as you said, you didn’t have much time so I imagine it was also really intense?

We had a very low budget which means very little time. That was really hard. I had to work faster than I ever had before. We had some big set pieces with crowds, and we couldn’t afford to close main roads, so we had all the usual indie film restrictions. Very often I didn’t think I had a scene at all and we just had to keep going, but, there was a lot of good will behind the project.

You also had young people on set who you had mentored, right?

Yes, I’m training a mentoring program for young people, so I always attach that to production. And some of the people I mentored in the past have grown up, and they were around as crew as well. My third AD, in particular, Geary Barnes, I met him as a young man after he’d come back from Iraq. And in Brixton, any of these estates, really, they can be quite tough places to film because the locals can tell you to bug off, but we had the complete opposite of this, we had this massive support from the community. On a practical level we couldn’t have done it without them. Their good will and excitement kept us going. Sometimes it was really chaotic with all these young people around!

Where do you go next from Honeytrap?

Creatively, I feel like I’ve come to the end of this chapter, I’ve been telling a lot of these young people’s stories now, I’ve been in this world for a decade, and I’m ready now to go onto a new chapter, but I will still believe strongly in mentoring, and helping making the industry a more diverse one. Often on a normal film set, as I’m told by crew members, it’s quite common to be on a crew with 50 people and there’s one makeup woman. And my third AD, Geary, has been working in the film industry here, and often he’s the only black person in the crew. It’s not anybody’s fault that it’s like that, but it would be better if it wasn’t. I really do believe, as I’m a consumer of the arts, that it’s a lot more interesting when stories for all different kinds of people are being told, and I don’t think it’s good if the only people who get to be a part of the filmmaking process are from privileged backgrounds.

Since filming Honeytrap, both Jessica and Lucien have gone to work here in the States, right?

Jessica and Lucien have now secured roles in TV series in the states. Jess has just got the lead in Recovery Road for ABC, by the writers of Easy A, which launched Emma Stone, and then Lucien has been cast as a series regular in Scream Queens by the writers of Glee. So they’ve both got these fantastic roles. It’s taken them a while, and they are both really committed, as well as talented, but there’s so few roles for black actors over here. Our output is really period drama. There’s less work being made over here, so if I was a young black actor, I would go to the States.

What are your hopes for Honeytrap?

I hope the film takes audiences somewhere they didn’t perhaps expect them to be taken, and that it moves and challenges them. This is a story that I’ve been passionate about wanting to tell, and that kept me going. There were times where I was writing it or making it, and I thought, Oh god is it going to be any good, it’s not, is it? I had doubts about myself and what I was making and how clever I was managing it, but I never had any doubts about the story and it’s importance, and I always felt that it’s really important story to tell and I knew what I wanted to say, it was whether or not it would come across, and I hope that faith is born out in the way audiences react.