When Andy and Lana Wachowski release a picture, moviegoers can rely on it to be a visual experience. In large part, that is because of the talent of their visual effects team, which has been supervised since The Matrix Reloaded by Dan Glass. Glass, who has worked with the Wachowskis on two Matrix films, Speed Racer, and Cloud Atlas, is also credited as the visual effects supervisor for Jupiter Ascending, which opened on Friday.

Jupiter Ascending, a space opera starring Channing Tatum and Mila Kunis, takes place on multiple worlds and in outer space. It involves creatures made from genes spliced with animals and futuristic technology like boots that “surf” waves of redirected gravity.

Like most of the Wachowskis’ films, it asks a lot of the visual effects team.

“There's a team of us that regularly work with the Wachowskis, and they bring us on board even before a script exists,” Glass told The Credits. According to Glass, he and the team started batting ideas around with the Wachowskis while working on Cloud Atlas, which was released in 2012. That’s around three and a half years from concept design to execution on Jupiter Ascending, with about a two year full-time commitment by Glass and the movie’s team of visual effects artists.

In Wachowski films, the script is often “informed by the visual aspirations,” Glass said. For Jupiter, the Wachowskis wanted to build a futuristic world that felt real and informed by reality. Their team spent a lot of development time seeking out a range of styles and discussing ways to combine them, for example visiting the Natural History Museum of London.

“They wanted to convey a vast sense of history, or richness, to this world,” Glass said. “They had looked at, for example, great European cities that conveyed great age through the juxtaposition of many aesthetics, whereas very often in science fiction we have shown cities and worlds that have very consistent looks to them. They felt that it would be more interesting to try an aesthetic that’s more jumbled, a juxtaposition of many different things, to try to convey the age and sophistication of the culture.”

Since Jupiter takes place in multiple worlds, ranging from future Chicago to Jupiter, Glass said they tried to “hook” every off-world environment into some real location. Even the spaceship environments looked to some real-world setting.

“Doing something original and different…is getting sort of harder and harder because there are so many ideas out there,” Glass acknowledged. The Wachowskis, though, are “never keen to rest and tread familiar ground.”

“They visually are always trying to push things into a new direction, and I’m grateful for it because it makes every project interesting in itself and whereas one might otherwise seek out different filmmakers to get different experiences, they provide such a variety,” noted Glass, who has also worked on visual effects for movies like Batman Begins and V for Vendetta. Glass started as a runner at a filmmaking company in London and worked his way up during a time when technology was beginning to become a key part of the movie industry. “The movie industry as a whole [has that] apprenticeship structure to it, which I respect,” he said. “You learn the ropes as you go.”

His favorite sequence in Jupiter is also one of the most challenging: a seven minute chase between Tatum (as Caine, a wolf-hybrid ex-military mercenary), who is protecting Kunis’ Jupiter Jones, and “shadow” creatures that takes place mostly mid-air over the Chicago skyline. 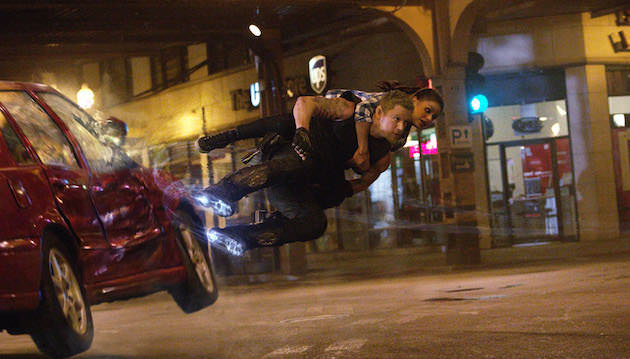 “What I love about that is it’s a true combination of practical or real photography, with somewhat minimal augmentation, and digital shots,” Glass said. “[The Wachowskis’] had this idea of gravity boots early on. [They] were trying to find a body language that would convey that and techniques that we could try to pull off physical stunts whenever possible. That ended up including things like big street ramps that were constructed, on location [in Chicago] and on stage where stunt performers free skated, to get the real body language on that. We built conveyor belts like they use to train horses, very large conveyor belts that were rigged at angles up in the air so that the stunt performer and sometimes Channing himself could leap from one to the other, while skating. Then we had trampolines and sometimes large boards. Finally, we went to suspending two stunt performers from a helicopter that we flew around and through the Chicago skyline. It was extraordinary to see them lifted up a thousand feet and then carried through the skyscrapers. We shot as many of those parts as we could with a custom-configured rig that we built that captured a very wide-angled view at a high resolution. Putting it all together was very fun.”

The technical challenges didn’t end there. Filming a human actor in hand-to-hand battle with a CG creature such as a man-sized lizard “is really difficult,” noted Glass, in a demonstration of British understatement. 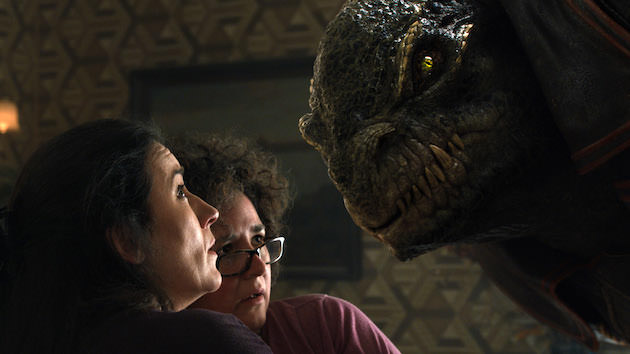 Creatures are new to his work with the Wachowskis, Glass pointed out, and “figuring out that part of the choreography and pulling it off took a lot of careful planning and the ability to improvise. We didn’t want to plan to the nth degree so a performer just had to mimic motions. We wanted to leave room for some real performance. [Then we had to] take shots that were shot in one way and try to figure out how to repurpose and re-appropriate.”