In Still Alice, Julianne Moore plays a linguistics professor who is shockingly diagnosed with Early Onset Alzheimer's disease. With her family (husband Alec Baldwin and grown children Kristen Stewart, Kate Bosworth and Hunter Parrish) by her side, she tries to deal with the debilitating and horrifying disease — saying at one point that she even wished she had cancer instead. Based on the novel by Lisa Genova, Alice has won critical praise, and most recently, a Best Actress Oscar nomination for Moore.

We attended a recent press conference with Moore, Stewart, Bosworth, Genova and co-director Wash Westmoreland (the other director, Richard Glatzer, couldn't make it). Here is an edited version of that conversation. 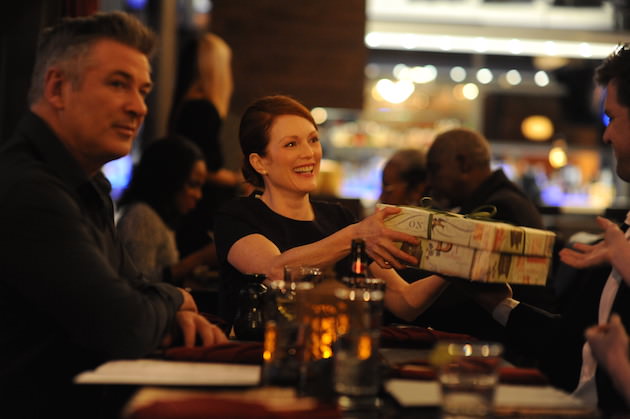 Julianne, how have your other roles informed this role?

Moore: Believe it or not, as actors, we’re freelancers—we literally go from job to job. Your make a movie, and then you make the next one, and then the next one. I barely remember 10 years ago. Often people will remember lines from my movies and quote them to me. And I’m like, "What’s that?" Michael Angarano and I were doing this little comedy called The English Teacher, and we had to kiss in it. So we kissed, and he said, "Was that sexy?” And I went, "Yeah, Michael, that was great, you were terrific, thanks a lot." And he said he wanted to die of embarrassment because he was quoting a line from Boogie Nights and he thought I would get it, but I didn’t remember. (laughs)

Moore: I know. but to be serious, I think everything you do as a person and as an actor informs your work, but it’s not really as direct as you might think. But of course it’s just like life. It’s cumulative. 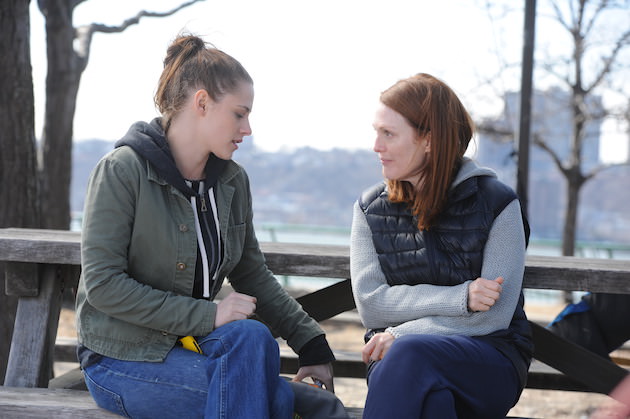 What was your reaction when you got this script? A movie about a woman with Alzheimer’s isn’t necessarily going to be a big box office hit. Does that factor in?

Stewart: Typically, no. The experience of doing something is always what drives you into it. It’s definitely morbid and it’s not a walk in the park, but sometimes with film, it can be very important. The minute I heard that Julianne was playing this part, I knew she would do something important. I knew this movie was being made so she could say something. It was our job just to hold her up. Movies aren't always about having fun and making people laugh, they're sometimes about saying something, and I think this movie does.

Bosworth: I feel the same way. I would imagine almost everyone in this room knows someone who’s been affected by Alzheimer’s. I have grandparents who have Alzheimer's, and we rally as a family to take care of them, so it touched me deeply. I felt like this was an opportunity to shine a light on this disease in a way that hasn’t been done cinematically before. So that was a real draw for me, and also being able to work with Julie. I’ve known her for many years but I haven’t had the opportunity to work with her. I wanted to be able to sit and watch her do what she does. It’s really spectacular to be around her and watch and learn, and to be a part of the message. 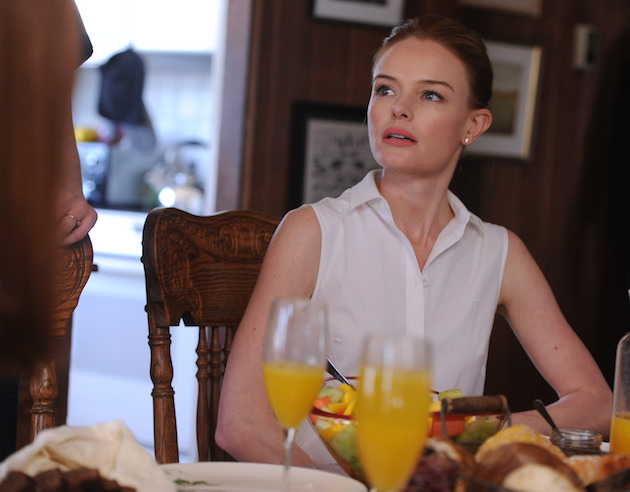 Moore: I did it for the money (laughs). It was such a wonderful script, and such a beautiful book that Lisa wrote, and what she did is so remarkable: presenting the disease completely subjectively. What would it feel like to go through this process? We never get to see that.

Stewart: It was worth it, because if we did it right, it would be more important than anything we’ve done in a long time. 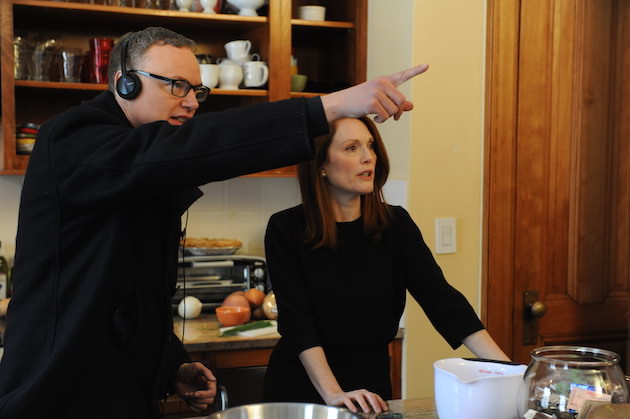 Westmoreland: This deals with something so difficult, but we wanted always to shine the light on the possible connections people could make, even in the most difficult times. Which I think gives the film something very powerful to say about what it means to be alive.

Wash and Lisa, was there a lot of give and take with regards to adapting the novel to film?

Westmoreland: Often when you get into a situation where a book is adapted, there’s tension between the author and the screenwriter. We wrote the first draft before we showed it to Lisa. and we were nervous when we sent it off because it’s her baby,and in a way we were the foster parents. But Lisa's response was immediately positive and incredibly supportive of what we’d done artistically. And the process continued throughout a few drafts and in production, and Lisa came to visit the set, and it was a wonderful time. We very much enjoyed seeing her book become flesh through these amazing performances.

Genova: I feel so incredibly lucky. You hear a lot of horror stories from writers and "what those people did to the book." None of that applies to this. I understood from the beginning—and I feel lucky that I had the consciousness to realize it —that this is not my project. This is not supposed to be the book. This is a movie inspired by the story. And so I made it clear to Rich and Wash from the beginning that I know I'm not steering the ship. This is your creative project, not mine. And yet if I can facilitate or support anything you’re trying to do, please ask me. I'm lucky in that the script they sent to me was wonderful and incredibly respectful to the story and to the subjective point of view of Alice. They got why the book was special: it wasn’t about what the caregivers are going though. While that’s a point of view that’s important, we know a lot about that. What’s so baffling and heartbreaking and difficult to understand is, What is the point of view of someone with Alzehemier’s as they descend further and further into dementia? And they were committed to staying in that point of view.

Westmoreland: That was one of the challenges because the book was from inside Alice's head. You’re with her, and you breathe with her and go through all of her tensions and disappointments and triumphs. The other challenge was what to leave out. A book takes like 16, 18 hours to read if you’re a slow reader like me, and there’s a lot of time for events to unfold. Some adaptations try to cling onto too much. You've got to be quite disciplined to get to the core of the story in a way that becomes a cinematic experience that works. 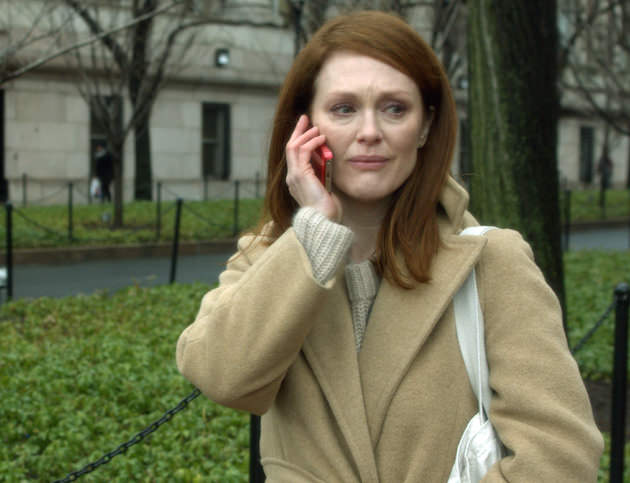 Julianne, did you reach out to any Alzheimer's organizations?

Moore: Boy, did I ever. I knew nothing about Alzhemier’s. I was actually one of those rare people who hasn’t had any contact with the disease, so I started with one of our producers, Elizabeth Gelfand Sterns, and she told me about her experience with her mother and her grandmother. Then the National Alzheimer's Organization set me up with three Skype calls with women who’d been diagnosed with Early Onset. From there, I went to Mount Sinai Hospital, where I talked to Dr. Mary Sano, the leading researcher there, and I had a neuropsychiatrist administer all the tests, which were fascinating. Then they sent me to the New York Alzheimer's Association where I met with women who were in support groups, and they supplied a lot of dialogue for me. There were specific things they said that I told Rich and Wash, and we tried to incorporate them into the dialogue, and from there I went to a longterm care facility and spoke to caregivers and family members. And I watched every single doc that was out there, and just immersed myself in it. I didn’t want to do anything on camera that I actually hadn’t seen, because I didn’t feel like I had the authority. People were so happy and excited that we wanted to know and that we were trying to get it right, and they really extended themselves. People with Alzheimer’s don’t feel seen a lot of the times because we look the other way, because it’s hard to look at, and they feel like there's some kind of a shame attached to cognitive decline. Like she said, "I wish I had cancer." When it’s cognitive, there’s a great deal of shame involved. It was great to have the experience of the people, and i really owe a lot to all of them.

Genova: This is a way of bringing the conversation to people and saying, "It's okay to talk about this. It’s okay to say that you have it." Now they will see Still Alice and see a vivid depiction of a woman who is not an elderly person in end stage, dying in a hospital bed, because that’s what a lot of the visuals of Alzheimer's have been. This is more of, "What will living with Alzhemier's look like and feel like?"