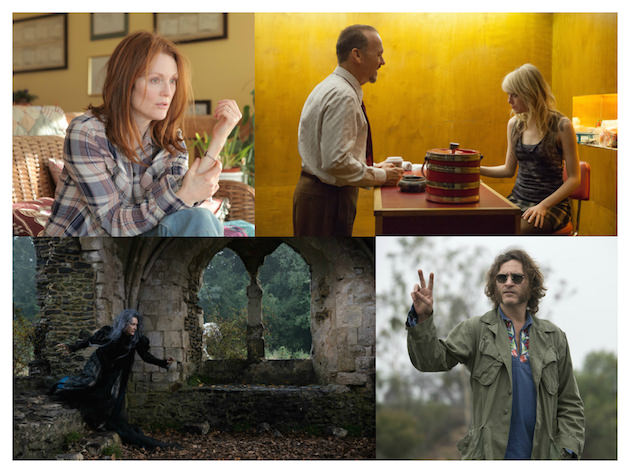 A Glimpse at the 72nd Annual Golden Globes

The 72nd Annual Golden Globes air this Sunday night at 8 pm EST, with hosts Tina Fey and Amy Poehler returning for a third consecutive time. You know these two are going to keep it fresh.

Let’s take a look at a few of the nominees and see what we know going in.

On the one hand, you have Richard Linklater’s Boyhood, one of the singular achievements in modern filmmaking. The special effect in Linklater’s film is time itself, and the way he, his cast and crew managed it made for an incredibly moving film experience, unlike anything else this year or any other. Then there's Ava DuVernay’s Selma, about Martin Luther King Jr. and the men and women who marched from Selma to the Alabama state capitol, in Montomgery, to demand to exercise their right to vote. The film she made is potent, and, it should be noted, timely. Rounding out this category are Foxcatcher (here’s a look at how Channing Tatum and Mark Ruffalo tackled their roles) and the two British genius films; The Theory of Everything (check out how they adapted Jane Hawking’s memoir) and The Imitation Game (learn about how Alexandre Desplat scored the film, and Maria Djurkovic created the film’s design.)

Julianne Moore is getting serious heat for her role in Still Alice, adapted from Lisa Genova’s self-published novel about a young woman’s early onset dementia. Then there’s Rosamund Pike’s turn as Amy Dunne in Gone Girl, playing a woman whose idea of teaching her husband a lesson involves (spoiler alert) setting him up for her murder and dispatching Neil Patrick Harris in the process. Reese Witherspoon both produced and starred in Wild, and is just about every frame of the film, carrying it off with grit and gumption. (Here’s how they tried to make her less pretty as a woman who hikes the Pacific Crest Trail, in it’s entirety, sans body wash.) While Eddie Redmayne understandably got a lot of attention playing Stephen Hawking in A Theory of Everything, Felicity Jones had the crucial, difficult role of his wife, Jane, and pretty much nailed it. Finally, Jennifer Aniston was one of the hottest subjects at the past Toronto Film Festival for her difficult role in Cake. See the trailer here.

Three geniuses and two borderline sociopaths make up your Best Actor in a Drama category. Of the three brains in the bunch, it would be hard to argue that Eddie Redmayne didn’t have the most technically challenging role, playing Stephen Hawking as he becomes physically reduced and ultimately wheelchair bound and voiceless (until a computer program helps him talk) in The Theory of Everything. Yet, David Oyelowo’s task might have been even more fraught; how does one “play” Martin Luther King Jr.? Oyelowo spent years petitioning for the role and thinking on it, and the result speaks for itself—in the resounding, idiosyncratic way King had with emphasizing his words, and in a performance that’s rich, layered and even playful. Your third genius is Benedict Cumberbatch in The Imitation Game, as British logistician, mathematician and godfather of the computer, Alan Turing. Your two sociopaths are Steve Carell as the billionaire eccentric John DuPont in Foxcatcher, and Jake Gyllenhaal as the ambulance chasing videographer Louis Bloom in Nightcrawler.

What a stacked category. You’ve got the total phenomenon that is Birdman (read our interview with director Alejandro G. Iñárritu here, or our two interviews with editors Stephen Mirrione here and here, or, our chat with composer and world renown drummer Antonio Sanchez here). It shares the category with the most Wes Anderson of all Wes Anderson films (and I say that with affection), the excellent The Grand Budapest Hotel (we’ve covered this film pretty exhaustively, see here). Then there’s the Christmas surprise hit, Into the Woods, which managed the feat of not alienating lovers of Stephen Sondheim’s original Broadway play, as well as winning new fans to the story of some of the fairytale world’s most beloved characters coming together in this interwoven narrative (here’s DP Dion Beebe discussing the look, and here’s costume designer Colleen Atwood discussing the clothes). The dark horses in this category have some serious pedigree, however. St. Vincent stars Bill Murray as a grouchy, debauched neighbor who befriends a young boy (Melissa McCarthy’s son, no less), and Pride is the story of gay activists in England who team up to help miners during their strike of the National Union of Mineworkers in the summer of 1984. Check out director Matthew Warchus narrating a scene from his film here.

Best Actress in a Motion Picture, Musical or Comedy

Of the three actresses in the non-musicals in this category, only Julianne Moore starred in a role that was truly meant to be funny. She’s the actress Havana Segrand in David Cronenberg’s Map to the Stars, giving a gonzo performance in a film that’s a show biz sendup, a dysfunctional family drama and a ghost story. Helen Mirren is the proprietor of a Michelin Star rated French restaurant, trying to run a new a Indian-owned restaurant that popped up across the street straight out of town in The Hundred Foot Journey. And Amy Adams plays Margaret Kean, the creator of the kitschy paintings of children with creepily big eyes that became a cultural phenomenon in the 1960s (check out our interview with screenwriters Larry Karaszewski and Scott Alexander here). Your two musical performances come from Quvenzhané Wallis in the title role of Annie, and Emily Blunt as the baker’s wife in Into the Woods.

Best Actor in a Motion Picture, Musical or Comedy

You have to imagine it’s Michael Keaton’s year after his career re-defining role as former superhero actor turned wannabe theater star Riggan Thompson in Birdman. Yet, this category doesn’t have a single slouch. Ralph Fiennes was fantastic as the hyper scrupulous concierge M. Gustave of The Grand Budapest Hotel, and nobody could have played the perpetually stoned, sneakily resourceful private eye Larry “Doc” Sportello in Inherent Vice better than Joaquin Phoenix. Then there’s everybody’s favorite human, Bill Murray, as the hard drinking neighbor with a nice streak buried somewhere beneath his gruff exterior in St. Vincent. And rounding out the category is Christoph Waltz, who is all exuberant smarm as the conniving art huckster Walter Keane in Big Eyes.

For gumption alone, it would go to Patricia Arquette, who got on board Richard Linklater’s Boyhood 12-years ago and kept it with, a few days a year, aging (gracefully) right before our eyes. Arquette is also completely wonderful in the role of Mason’s mother (the boy in the title), shepherding her two children through their Texas upbringing best she can. Jessica Chastain is dynamite as Anna Morales, the mobbed up daughter and very strong willed wife of her businessman husband Abel in J.C. Chandor’s A Most Violent Year. Keira Knightley plays Joan Clarke, the only female codebreaker employed by England during World War II in The Imitation Game. Meryl Streep earned her 1,298th acting nomination for playing the witch in Into the Woods. And finally, there’s Emma Stone, who plays Michael Keaton’s daughter Sam in Birdman, and who delivers a brutal (but truthful) assessment of his attempt to mount a Broadway play.

Ethan Hawke has long been a Linklater collaborator, having co-written and co-starred in the Before trilogy for the director. Here he’s nominated for playing Mason Sr. in Linklate’r Boyhood. Robert Duvall is in for playing Joseph Palmer in The Judge, and Mark Ruffalo’s in for playing Olympic champion wrestler David Schulz in Foxcatcher. If the award went to who appeared to be having the most fun in his role, it would be a tight race between J.K. Simmons and Edward Norton. Simmons plays the music conservatory instructor from hell in Whiplash, while Norton plays Broadway legend and all-around hell raiser Mike Shiner in Birdman.

What a list of nominees. These directors managed to distill an explosive moment in our nation’s history, create a dazzling world in a fictional hotel, achieve both technical mastery and emotional depth in what appeared to be a single continuous shot, adapt a juggernaut thriller novel into a tense, layered Midwest noir, and finally, create a truly one-of-a-kind film going experience we’ve never seen before and may never see again. We’re talking about, respectively, Ava DuVernay’s Selma, Wes Anderson’s The Grand Budapest Hotel, Alejandro González Iñárritu’s Birdman, David Fincher’s Gone Girl and Richard Linklater’s Boyhood.

Wes Anderson created a kind of parallel universe in The Grand Budapest Hotel, one that was buffeted by events much like World War II and the rise of the Third Reich, but in his own, inimitable way. Gillian Flynn adapted her own novel and is now looking at a Golden Globe nom for Gone Girl. Alejandro González Iñárritu, Nicolás Giacobone, Alexander Dinelaris and Armando Bo are nominated for Birdman. Richard Linklater for Boyhood and finally, Graham Moore for The Imitation Game.