The Hobbit: The Battle of the Five Armies A Final Curtain Call for Middle-earth

Set 60-years before the start of the Lord of the Rings trilogy, The Hobbit: The Battle of the Five Armies premieres this Friday, December 19. Whether or not you’ve been a fan of Peter Jackson’s Middle-earth sextet, there is no denying the awesome amount of love and effort he and his huge creative team have poured into this franchise. This has been a filmmaking enterprise every bit as epic as what the peripatetic Hobbits Bilbo and Frodo endured.

Outside of George Lucas, there is no other filmmaker alive who has dedicated himself to fashioning an entire fictional realm than Jackson. Lucas, of course, is responsible for making a galaxy far, far away a cultural and cinematic touchstone, birthing a universe that keeps on expanding, with the release of J.J. Abrams Star Wars Episode VII: The Force Awakens due out in December of 2015. Star Wars has been the result of hundreds, even thousands, of talented individuals, but the original conception sprung from the Lucas's mind.

One could argue that Jackson's hallmaker creation was more daunting due to the fact that it first sprung from the mind of somebody else. Tangling with source material is never easy, let alone the more than 1,400 pages worth of the combined  “The Lord of the Rings” trilogy and “The Hobbit: There and Back Again” that author J.R.R. Tolkien wrote. Jackson was dealing with a Middle-earth so impressively, vividly imagined that it contained not one but several invented languages. J.R.R. Tolkien’s first job after World War I was at the Oxford English Dictionary, and he taught Old and Middle English philology, Gothic, Old Icelandic and Medieval Welsh at the University of Leeds; his immense learning shows in his work. Middle-earth was so minutely realized by its' creator that they offered Jackson less a blueprint for how to adapt his films than a Library of Congress worth of detail to sift through. Along with the languages there are the maps, the family histories (of men, dwarves, elves, orcs, wizards, hobbits, etc.), and, perhaps most challenging of all, the legion of fans, serious fans, who could tell you on what longitude and latitude the Shire fell, name every branch on Thorin Oakenshield’s stupendously complicated family tree, and speak Elvish.

Somehow, Jackson and his creative team pulled it off, and with the upcoming release of The Hobbit: The Battle of the Five Armies, the end of his Middle Earth saga brings to a close one of the most audacious, impressive adaptations of all time. Six films, spanning thirteen years from the release of the first to the last, 266-days of filming for each trilogy (a bit of mathematical kismet right there), and 1031 minutes of screen time.

Battle of the Five Armies begins with Bilbo Baggins (Martin Freeman), Thorin Oakenshield (Richard Armitage) and the Company of Dwarves having reclaimed the dwarves homeland, but at the price of unleashing the dragon Smaug (voiced by Benedict Cumberbatch), who is bearing down upon the defenseless men, women and children of Lake-town.

Although Bilbo is The Hobbit’s hero, and Gandalf (Ian McKellan) is the entire film series’ prime mover, it’s the dwarf, Thorin, who has dictated much of the action in The Hobbit trilogy. When we open in The Battle of the Five Armies, Thorin has dragon-sickness, and we watch him sacrificing old friends and his honor to search for the Arkenstone (a classic jewel-encrusted MacGuffin in a series that has the ultimate MacGuffin of all, the ring). Nothing Bilbo says or does can seem to persuade Thorin, and to make matters worse, an ancient enemy has returned to Middle-earth, that evil, burning eye from The Lord of the Rings trilogy, Sauron. He’s sent his legions of Orcs in a stealth attack upon the Lonely Mountain. 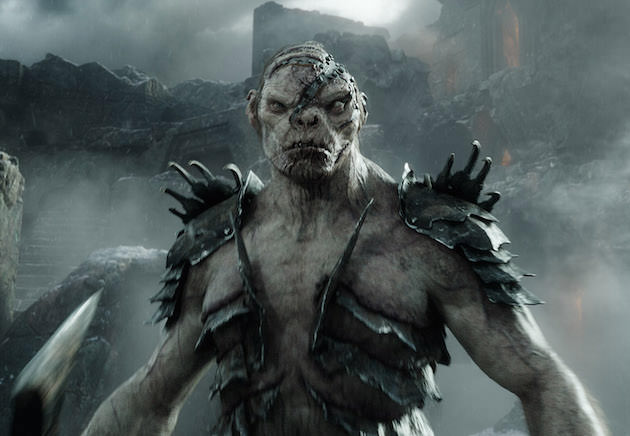 Richard Taylor, the creative director for Weta Workshop, promised in a behind-the-scenes featurette that the final battle in the film is unlike anything ever committed to screen before. What’s easy to forget is that when Jackson began this journey, a lot of the technology for what he was creating either didn’t exist or was in very early forms. The series' visual effects have been largely created by Weta Digital, which was co-founded by Jackson (along with Richard Taylor and Jamie Selkirk), which was only six years old when the first Lord of the Rings began production. One of Weta Digital's most memorable early creations was the crucial character Gollum (he spans both trilogies), the ring-obsessed former Hobbit. At the time of his creation, Andy Serkis, who is now widely regarded as not only a fine actor, but the best living motion capture performance artist on earth, was a relatively unknown character actor brought onto the first LOTR to voice Gollum. Serkis and the Weta Digital team drove the development of the motion capture process, which was in its larval stage in 1999 when they began production. "For the original Gollum, there was no whizzy technology," Nikki MacDonald writes in New Zealand's Dominion Post.  "Animators simply used Serkis' movement and expressions as a guide."  Now Weta is able to capture the most subtle facial expressions and movements, giving characters like Gollum, Caesar from The Planet of the Apes and James Camerson's blue Na'vi in his Avatar films (the second is due out in 2016) the full spectrum of emotions.

All of the technology available to Jackson and his team has expanded to an astonishing degree in the past 16-years. By the time Battle of the Five Armies was in production, Jackson had the ability to bring a level of creation and control to the screen that was well beyond anything he’d had before. Now he could control individual elements of each battle, able to maneuver a single character through a 3D landscape populated by thousands of combatants, and film sequences using a virtual camera. This meant that he could make framing, timing, angles, lens and camera movement choices on every moment on the battle. “Rather than providing believable simulations for immense armies, we provided detailed animated combatants at an unprecedented scale," said Weta's VFX supervisor Matt Aitken in the production notes. "Peter could actually walk through each environment virtually, and create sequences that wouldn’t be able to be committed to cinema any other way."

There are 1,838 visual effects shots in the film, which consumed what those in the VFX realm call 16,000 render years, which includes all the digital elements that are needed to enhance primarily live action sequences. This means the way the light interacts with fog, clouds, sky, water, ice, skin, hair; all that has to look exactly right so the appearance of a massive troll looks real.

In the end, however, all the technology is there to serve the story, one lovingly rendered for the screen by the hundreds of cast members, extras, and incredible crew. The Hobbit: The Battle of the Five Armies opens this Friday.