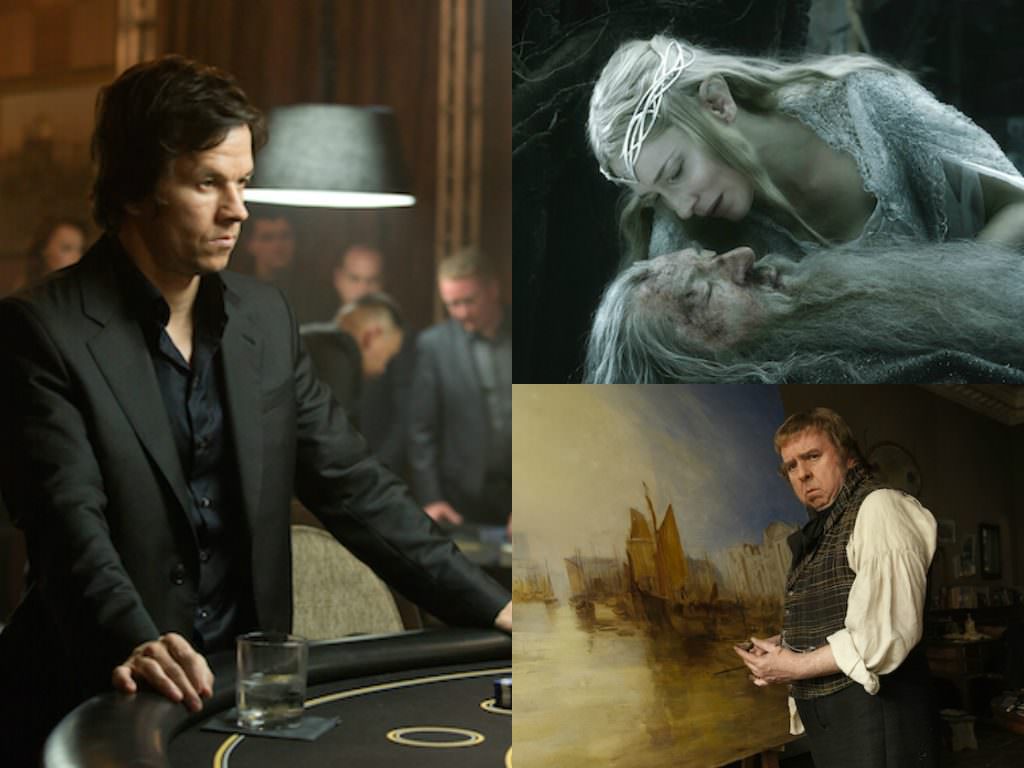 A hobbit, Teddy Roosevelt reanimated from wax, a bumbling dad, a brilliant, irascible painter, a indefatigable child, and an inveterate gambler walk into a bar. The bartender goes, oh hey, you're all starring in films this weekend.

Terrible jokes aside, we are heading into the home stretch of the holiday season, with a slew of big films set to land on Christmas Day (Unbroken, American Sniper, Selma), the very last in a wild year at the cinema. This weekend alone gives you a variety of genres to choose from. In the mood for spectacle? A character study? A biopic? An adaptation of a Broadway musical? A sexy Indie? A comedy that will also double as a final goodbye to a beloved performer? One of each is opening this weekend.

The Hobbit: The Battle of the Five Armies

Join Bilbo, Gandalf and the gang for one last, leisurely stroll through Middle-earth. Save for that battle in the title, which is huge and covers a large portion of the film and is as grand a spectacle as Jackson has filmed, on par with the two standout sequences from his Rings trilogy; the Battle of Helm's Deep in Two Towers and the Battle of Pelennor Fields from Return of the King. For Hobbit-heads, check out our story about Middle-earth’s curtain call, and how director Peter Jackson and his team built those magnificent sets.

Night at the Museum: Secret of the Tomb

For the many people still mourning the death of Robin Williams, director Shawn Levy's Museum 3 offers a chance to see his unparalleled energy and verve on screen one final time. As Teddy Roosevelt, Williams has been one of the best things about the series, and as Entertainment Weekly’s Joe McGovern writes, Williams final scene in his final film “makes for a poignant testament,” and it would be hard to for anyone to watch it without a tear in their eye. Plus, this is something you can bring the kids to.

Annie and it's cast and crew were some of the many victims of the Sony Hack. Here's your chance to see director Will Gluck's take on the story with Quvenzhane Wallis in the titular role in its proper venue, on the big screen, as they usher in a new Annie for longtime fans of the musical and for children just being introduced to the irrepressible little girl at the heart of the story.

Mark Wahlberg plays Jim Bennett, English professor by trade and high-stakes gambler by preference and passion. Like any good film with gambling at its core, Bennett gets in way over his head when he borrows cash from a gangster and puts up his own life as collateral. A remake of the 1974 original that starred James Caan, director Rupert Wyatt’s stacked the deck (ugh, sorry) with a great supporting cast, including John Goodman (given the kind of dialogue he can crush and that he usually relies on the Coen Brothers to provide) as a philosophical underworld figure, and Michael K. Williams as a gangster with poise, intelligence and wit. Carrying it all is Wahlberg, who “embraces self-loathing and personal free fall in a cool but perversely intriguing look at a man who not only walks on the wild side, but seems to want to take up residence there,” as Todd McCarthy writes.

Goodbye to All That

When we interviewed writer Angus MacLachlan about his directorial debut Goodbye to All That, we focused primarily on his comfort in working with actors. It showed, as his star, Paul Schneider, won Best Actor at the Tribeca Film Festival for his role as Otto Wall, the affable, unfocused man stumbling his way through his life. The rest of the film is superbly acted, and MacLachlan had the good sense to keep all these characters, from Otto to his aggrieved wife to his beloved daughter, three-dimensional. Even the performances that last for only a scene or two, notably Heather Graham and Ashley Hinshaw, standout. Finally, it’s a surprisingly sexy film, unabashed about people’s desires and unafraid to show them honestly. There are no bad guys in this film, only one very confused man and the people he loves and loses as a result.

Two huge talents converge again for this film about the eccentric British painter J.M.W. Turner. Director Mike Leigh, who doesn’t make bad films, and one of his longest standing collaborators, actor Timothy Spall as Turner, manage to do what’s nearly impossible; make real art out of a biopic about a great artist. , high praise from a gifted film critic, and even if you weren’t a fan of biopics, or knowledgeable about Mike Leigh or Timothy Spall’s work, you could still get lost in a film this lovingly shot, honoring the painter's beautiful brushstrokes.