Robin Mathews is on a bit of a roll, having won her first Academy Award last year for Best Achievement in Makeup and Hairstyling for her work on Dallas Buyers Club, where she helped Matthew McConaughey complete his physical metamorphosis into Ron Woodroof, the Texas electrician who was told he had 30 days to live when he diagnosed with AIDS in the mid-1980s. Mathews has a way with helping stars morph right in front of our eyes; rent Lee Daniels' Paperboy to see what she did for both McConaughey and Nicole Kidman, or Into the Wild to see how she turned Emile Hirsch into a young man being drained of life out in the Alaskan wilderness.

Mathews recently re-teamed with Buyers Club director Jean-Marc Vallée on Wild, starring Reese Witherspoon (who also produced) as Cheryl Strayed, based on Strayed’s memoir about hiking the Pacific Crest Trail (we're talking thousands of miles worth of hiking) and after a particularly gruesome stretch in her life. Mathews was tasked with transforming the effervescent actress into a former heroin user who spent week after grueling week being battered, bitten and bruised by the elements. What's more, Mathews had to do this all out of sequence, applying a fresh cut on Witherspoon on a Monday that needed to look two-weeks old and scabbed over on a Tuesday. And don't even ask about what she had to do with dirt (because we already did). We found out Mathews kept the continuity of all of Witherspoon's many cuts, scrapes and bruises, learned about the art of applying dirt, and got a hot tip on a little bit of British makeup that's perfect for creating chapped lips.

Yeah, Jean-Marc Vallée brought me to Wild, I’d also worked with Bergen Swanson, the line producer on Welcome to the Rileys.

Did you need to talk with Witherspoon beforehand?

Jean Marc had me interview with Reese, we Skyped.

This is also not your first time heading up the makeup department for a film with Wild in the title. I imagine both were pretty difficult shoots.

This was an extremely difficult shoot, and yeah, I also worked on Into the Wild, I’ve somehow cornered the market on films with ‘wild’ in the title. Into the Wild prepared me for Wild for sure, although they were similar, their productions were very much separate battles. Jean Marc shoots without any camera or lighting set ups at all, that’s no grip or electrical crew. All the camera work is handheld and all the lighting is ambient. So whether we’d be running up a mountain or down into a gulley, the camera is always shooting. The only time the camera’s not filming is during makeup changes, costume changes, and lunch.

We were on the run constantly. I’d say another big challenge was making sure the continuity worked. The hike takes place over a three month period, and because they show title cards of what day it is in the hike on screen, the audience knows exactly what part of the journey we’re on. So she’s got bumps and bruises and scrapes and cuts from different things, the audience realizes how many days later it is since she got that cut or bruise, which means I have to make sure those injuries healed properly. I couldn’t take dramatic license in how those bruises heal, I had to do it in real time. Keeping up with that was an immensely difficult project.

How did you manage to make a bruise look a week old on a Monday shoot, and then brand new on a Tuesday?

For the bruises, that’s just from years and years of studying injuries. I have files on my computer on every type of injury you can imagine, from people shooting themselves in the head, to body parts being chopped off, to black eyes and simple bruises and cuts and even surgery. I’ve just done a ton of research into what these things look like. I definitely know the process of healing wounds and bruises. That combined with an amazing script supervisor [Suzanne Bingham] who helps us break down where we are in the film and keep continuity. 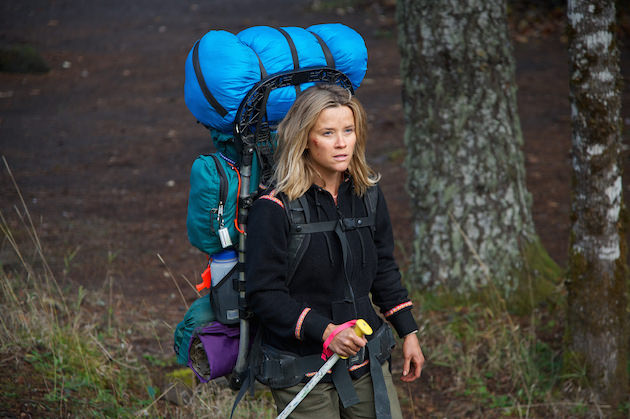 It can’t be easy to make Reese Witherspoon look weathered.

Yes, Reese is a gorgeous young woman, to make her look like she had no makeup on, and was out in the wild not showering for three months, pretty much, save for streams, was something that she, Jean Marc and myself all worked on together. Jean Marc had certain ideas and so did Reese, and I was in the middle trying to help mediate and bring the two together. And we found a common place we could all be happy with. There are times where she needs to look worse than others, when her character has gone through some emotional stuff. At the end she really finds herself, and finds her soul again, so we made her look a little bit better towards the end.

What was that happy medium?

Jean Marc wanted me to use no beautifying makeup at all, and any makeup we did use had to make her look worse. It’s hard to do that with Reese, she looks gorgeous without any makeup already, so he really wanted to bring her down more. Reese had shot a film prior where she didn’t wear any makeup, and it was just too much, and she didn’t think that was necessary to tell this story, so I was stuck in between those two things and trying to bridge a gap between those ideas. My job is to follow through with both of them on what they want. We finally came up with a method where, for her younger look, I used some dental plumpers, which filled out her cheeks a bit. I used them in Dallas Buyer’s Club, they’re molded to your teeth, like a retainer, and they have dental material on the inside that we mold to push her cheeks out from the inside making her face look fuller, the way people who are younger look. So we did that. Additionally I had some highlighting materials around her eyes, giving her a little bit of a glow so she looked younger. 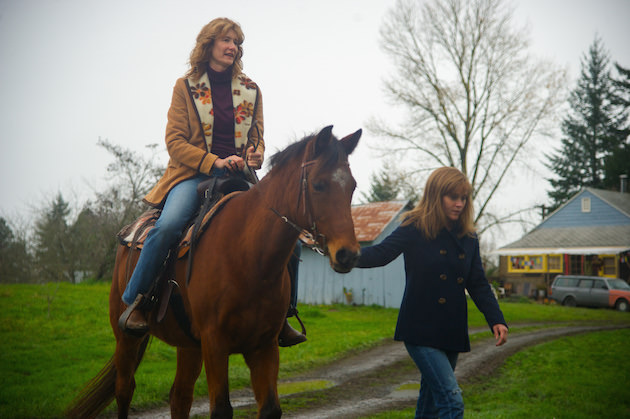 And then when her character gets addicted to heroin…

So the next phase is her mother dies and she becomes a heroin addict, and there we stripped her bare without any makeup. I added a lot of effects, like bags under her eyes. We tested a lot of different techniques, and ended up hand painting uneven skin tones on her, dark circles under the eyes. To chap her lips, I have a product that I love that not many people know about, you can only get it in the UK, they have this little pot of chapped lip product which is actually a milk protein, and it allows you to paint onto the actor’s lip, then as their lips are drying, you have them purse and relax lips and it makes chapped lips. I also hand painted on her blemishes, because when you’re in the throes of drug addiction, you usually have acne. 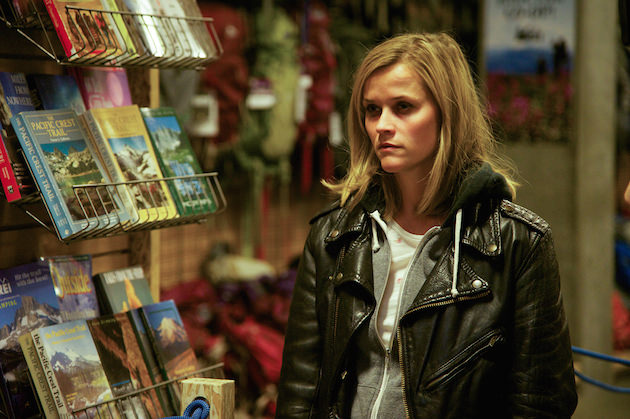 How did you manage her look once she was on the trail?

Once she comes out of that portion of the story and starts on the hike, she’s still a wreck, but now in a different way, now she’s getting dirty and cut up. I have so many photos of bruises and cuts and scrapes, and we kept adding to it to make it sure it looked like the journey was real. This also included her tan, which became sunburn. We had to create layers of that…keeping continuity of all of this was a tremendous amount of work.

How do you manage to maintain the continuity of something like the dirt she accumulates on her face and body?

Well dirt’s really tricky to do properly, because it needs to look like it’s sunken into the pores, the crevices of skin, wrinkles, under the nails, and it can look fake really easily, so that’s a process. On this part of the hike we went without any cosmetic corrective beauty makeup. For the dirt, the process I use is a spray dirt with different colors. For example, I took a dark brown spray dirt and sprayed it all over her arms, and I worked it into the skin with my hands, really massaging it so it gets in there. Then I take a baby wipe and wipe all of it back off, gently, so then you just see the parts that are stuck in the crevices and pores Then I do a light misting, and start removing portions of it, random portions, maybe a couple more times with different colors of dirt. Then I’ll take different sized stipple sponges, with different sized holes, and create little patterns on the skin. Then I’ll take those and use that to make different little marks of dirt, random patterns on top of the layers. 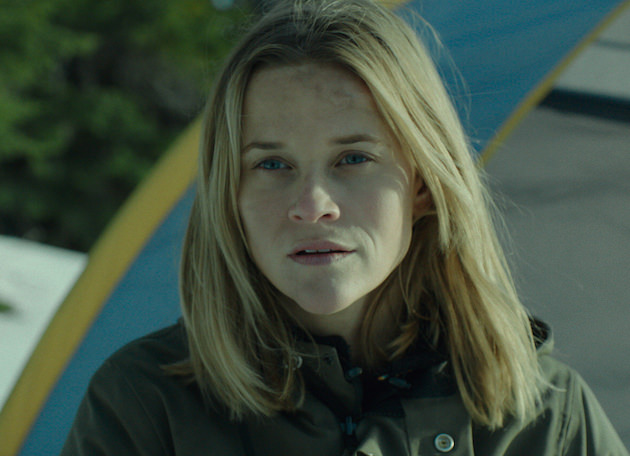 And sometimes I used a powdered dirt on top of all that, because she was in more sandy or dusty surfaces, like out in the dessert. When she was near the river, or more tropical surroundings, I wouldn’t use that stuff. She had anywhere between five to six layers of dirt on her at any point of time during the film.

So the makeup didn’t come back on until towards the end?

Yeah, as we get to final part of trail, when she’s really found herself, we added a little corrective makeup there to make it look like she was settled into her spirit. Even though she was still dirty and sunburnt, she had found what she was looking for. 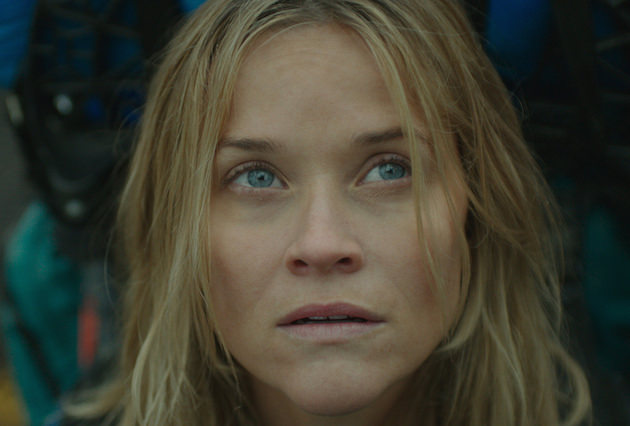 How difficult is it for the hair and makeup department with the way Vallée shoots?

The way he shoots is so extremely difficult for makeup and hair. The only time we really stop is when we’re waiting on hair and makeup, all the other departments are constantly working while the camera is shooting. Going on a hike like Wild, where we went on the real hike and were really in the elements in dangerous situations, on the side of a highway that was open, laying down on the side of the freeway, running up and down mountains and gullies and trying to cross streams, and through all of that we’re trying to bring everything we need in hair and makeup to make it look realistic, it was very difficult. I’d have to say it was the most difficult film I’d ever shot. At least for Into the Wild we had camera and lighting set-ups.

Something tells me you’d willingly head off onto another project with Vallée, however.

I adore everyone Jean Marc works with, we became really close during Dallas Buyers Club, and he’s asking me to do another project next year, he’s getting all the stuff together for that.

Can you tell us what it’s about?

All I can say is Jean Marc enables us, as a team and with the actor, to really transform them.