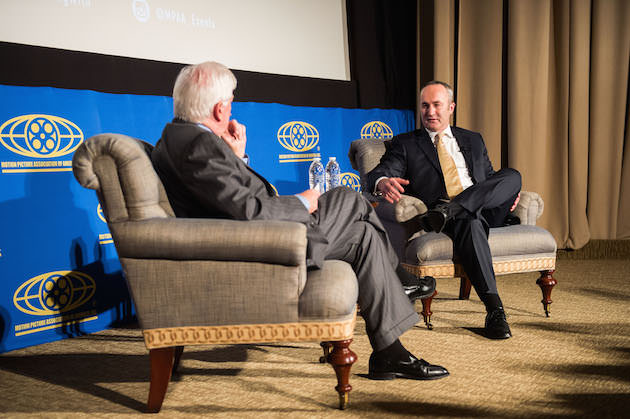 The actual business of making films, from acquiring insurance to dealing with lawyers to the Byzantine permits, permissions and contact stipulations can be, in the right storyteller’s hands, entirely entertaining. Indian Paintbrush’s COO Peter McPartlin is one of those storytellers.

There have been books about the business of Hollywood (Peter Biskund’s Down and Dirty Pictures comes to mind) that reveal the huge personalities orbiting behind the filmmakers and the stars, acting upon them like a gravity, pulling projects together (and sometimes apart). Film lovers devour stories about how their favorite films were actually put together. Take the miles of magazine real estate the making of The Godfather has produced, with great pieces of reporting, like the work of Vanity Fair’s Mark Seal, on the personalities (and personality clashes) behind one of the great films of all times.

While he shared no scintillating stories of actor meltdowns or deals scuttled by monstrous demands, McPartlin, knows how to tell good stories about the business side of moviemaking. Indian Paintbrush has produced a string of great (and some very underrated) films, from Fantastic Mr. Fox, Jeff Who Lives at Home and Young Adult to Moonrise Kingdom and this year’s The Grand Budapest Hotel. McPartlin sat down with the Motion Picture Association of America’s Chairman and CEO, Senator Chris Dodd, to discuss securing Wes Anderson’s preferred location for his grand hotel, what it takes to secure the rights to a lawn flamingo and more.