It's sometime in the 1950s when Margaret (Amy Adams) quickly packs her things, grabs her daughter Jane, and leaves her husband. In short order she finds herself in San Francisco, applying for a job painting Humpty Dumpty's on cribs for a manufacturer. Margaret's passion is painting, specifically small children, looking straight at you, with very, very big eyes. 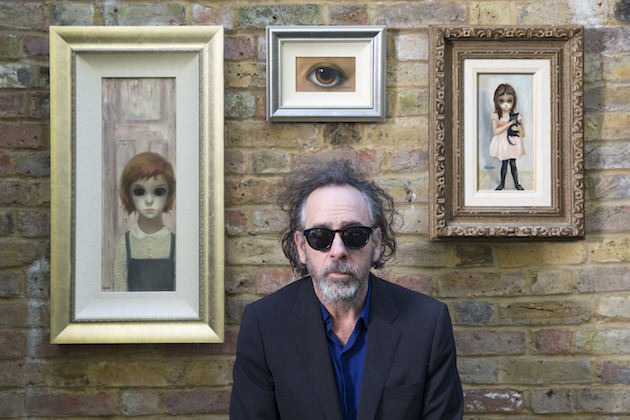 The paintings were a touch creepy, on the very fringes of what could be considered real art, and would have stayed there had she not meant a man by the named Walter (Christoph Waltz), selling his Parisian landscapes next to her one day in the park. Soon Margaret is married to Walter, a world class conniver, bullshitter and salesman (all the same thing, perhaps), who through a little bit of luck and an insane amount of chutzpah, turns Margaret's Big Eyes paintings into a phenomenon, making them both rich, famous, and complete frauds—Walter has told the world the paintings are his, born from his travels through war ravaged Europe, spotting orphans in the rubble.

As Todd McCarthy wrote in his excellent review of Tim Burton's Big Eyes for The Hollywood Reporter, the immense success of Margaret Keane's paintings were all the more surprising considering the cultural gatekeepers at the time were a whole lot more strident then they are now. Today you can become famous via a series of Vine clips of elaborately falling into a pool. Then, however, Walter used a copy hungry San Francisco Chronicle reporter, Dick Nolan (Danny Huston) to plant stories about him in the paper, making him, as screenwriter Scott Alexander told us, "a big fish in a small pond." Eventually, Walter hits on the idea that selling copies of "his" paintings in poster form, while still gifting paintings to huge stars and politicians. 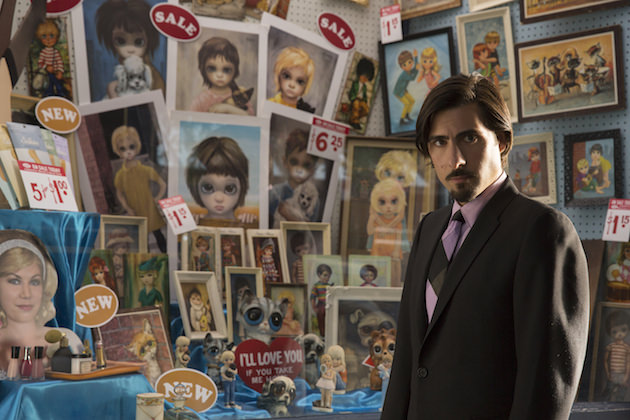 The Big Eyes paintings blow up, finding their way into the hands of Hollywood royalty (Joan Crawford), Italian industrialists (Dino Olivetti) and seemingly half the country. Only the fame and money only make Walter hungrier for more, pushing Margaret to the limit of what even a good, quiet, demure woman of that era could endure. 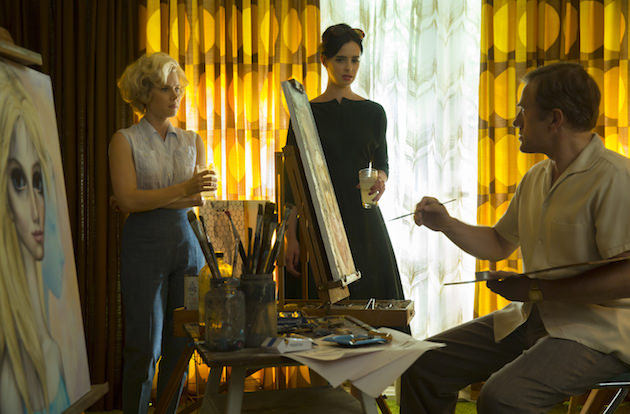 Adams and Waltz are excellent. Gone is the pistol she played in American Hustle, but her eyes still register strength and will, which she will eventually have to put to use. Waltz as an art huckster with a touch of sociopathy? He seems as comfortable here as he did playing the German bounty hunter in Django Unchained or the voluble, brilliant, sadistic Nazi in Inglourious Basterds. And although quieter and more grounded than much of his work, this is very clearly a Tim Burton film, visually splendid, funny, and creepy when it needs to be. It is also very much the work of the screenwriting team of Scott Alexander and Larry Karaszewski, the men who found the right angles in the lovely Ed Wood, the surprisingly touching The People vs. Larry Flynt and the excellent Man on the Moon, about comedian Andy Kaufman. We spoke to the duo about where they found this story about the Keanes, how they made a protagonist of a demure character like Margaret and more.

Okay, which one of came up with the idea for doing a script about the Keanes?

Larry: We were working on a science fiction script, believe it or not, it was a re-write, and the movie took place on another planet. It was about these higher intelligent beings….

Larry: And a bunch of earth junk lands on the planet, and they become totally fascinated by like, MC Hammer albums. So it totally corrupts their culture, very quickly, and so we were looking for examples of earth kitsch, and things we can have land on their planet. And Scott opened up a volume of…

Scott: The Encyclopedia of Bad Taste…I was just flipping through…

Scott: And the Village People, and all these things that taste good but are bad for you, and then on one page was an article on the Keanes, and it was a kind of greatest hits about the rise and fall of Walter and Margaret Keane, and I was astonished by the story.

Larry: It was one of those great things where everyone knows those paintings, but no one knows what happened behind the scenes. No one knows about this weird comedy/drama version of Who’s Afraid of Virginia Woolf that happened—

Scott: We get a real kick finding these weird, fringey, pop culture stories that kind have to be dug up. For us it’s a lot of fun to try and reconstruct these bizarre tales that happened a long time ago that no one’s really familiar with.

Larry: So we found the public story, but we realized while Walter might be this really charming and conniving character, he’s really one of our kind of characters, like the way we wrote Ed Wood or Larry Flynt or Andy Kaufman: Man on the Moon, we knew that the real heart of the film would be Margaret and her struggle, so we felt we had to contact Margaret Keane. A friend managed to get us a contact at the Keane gallery and we went up to meet Margaret. And we just sat down with her and we asked her a bunch of questions about what it was like for her; her relationship to her daughter, her relationship with her friends, and we had to get Margaret’s rights because we needed the rights to the art, and we really wanted to get her trust. She opened up to us and that’s where we discovered the heart of the movie.

What did she tell you that made you realize you had your story?

Scott: Like how much she regretted lying about her art to her daughter Jane, pushing her away for ten years, and Jane knew she was being lied to. If you lived inside the Keane house, it was very obvious what was going on. And how much Margaret regretted this, and how Walter pushed her friends out of her life because they couldn’t have people over to the house, otherwise they might stumble onto the painting room. This gave us the idea for the character we ended up writing as the Krysten Ritter character. Margaret talked about [San Francisco Chronicle columnist] Dick Nolan and Walter paling around, so suddenly now we have the Danny Huston character. She talked about the two Asian ladies who came walking up her path one day in Hawaii and converted her into a Jehovah’s Witness, so now we have a third act…all of these personal touch elements, which sort have nothing to do with the big art fraud story, they’re more Margaret’s quiet version of what happened to her, it all came out of that afternoon. That’s how we filled out the movie. 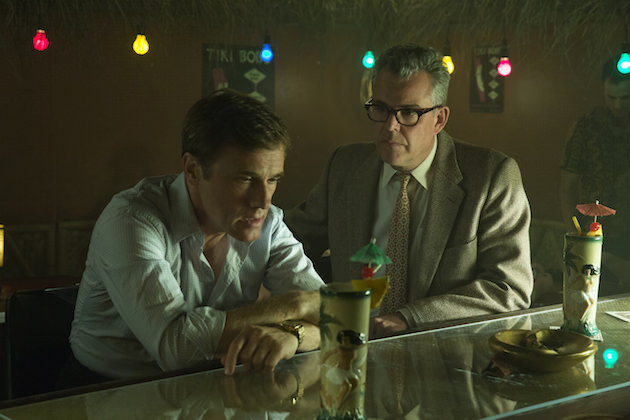 Larry: Right, because we actually really need that stuff because Margaret’s a quiet character, and to make her the protagonist of the movie you have to have all these interesting things happening around her that she’s reacting to.

Did you worry about having a main character that’s more passive, that has all these things happen to her, rather than proactively getting herself into all of these wild situations?

Scott: Well she’s an active passive protagonist. I’m thinking about a scene I’m really found of, which is the Olivetti scene. Here you’ve got Italian industrialist Dino Olivetti coming into the club, and we actually wrote in the script, it’s he looks like he’s out of La Dolce Vita, it is him and two buxom blondes and he’s clearly wealthy and important and famous and then he says, ‘Who’s the painter?’ And it becomes this tragic turning point. The camera's on both Keanes, and Walter is waiting for Margaret, it is her choice to speak up or not, and she chooses to not answer the question.

Scott: So I’m saying she is actively choosing to be passive. 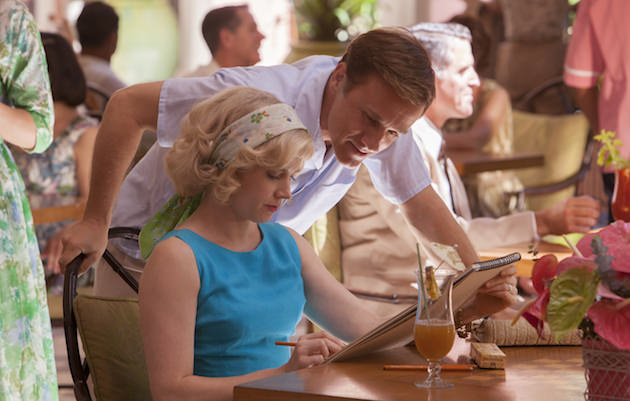 She even admits at some point that Walter is much better at the sales, socializing, schmoozing aspect.

Larry: To this day she says that her paintings would still be in the park if it weren’t for Walter.

Scott: We were putting different stories together to be able to write a scene, but she’s looking at this fast talking, important guy Italian industrialist who doesn’t even speak English, and she’s thinking to herself, ‘If I walk up to him, what am I even going to do? What am I going to say? I don’t know how to talk my way through that situation.’ But she knows that Walter can.

Larry: That was a total challenge, because Margaret Keane is not…

Without giving too much away, that scene when Walter’s really, really lost it, and is chasing her through the house, Jack Torrance style, with the matches…did that happen?

Larry: That happened. She said it started when they were outside the house and he was throwing things at her. Then they went inside and he was chasing her, threatening to burn down the house while she was in it. And Tim filled that in such a great way. What we love about working with Tim is he likes to make genres the way we like to make genres…it goes from something really funny to, 'Wait, that’s a horror film.' When Tim talks about Mario Bava and Hitchcock, I think he’s referring to that section of the movie where the woman is trapped and you sense that violence is going to occur.

And it really snaps her out of her years-long haze.

Larry: My mom stayed with my father for twenty years, that was psychological and not violent, but he really dominated her, and you know, as kids we were grabbed in the middle of the night after twenty years and thrown into the back of a car. I definitely have that memory of a mom who couldn’t speak up for herself. A lot of times it was because she was a good Catholic girl and it was a sin to leave. So I put a little bit of personal stuff into that scene with Margaret.

Scott: And the thing is Walter’s a really odd villain in that he’s so successful. Everything he promises actually occurs.

He’s definitely a bit of a sociopath, but he’s charming. At least at first.

Scott: He had a bit of the Hitchcock villain in him in that he has to win us over in the first section of the movie. We have to think he’s a total dreamboat catch for her. He’s delightful.

In real life was he European? Or was it just that you had a chance to cast Christoph Waltz?

Scott: He was from Lincoln, Nebraska.

Larry: What was interesting was because the movie takes place in the late fifties, I found the casting of Christoph a dream, because there’s that Charles Bouvier thing, that European gentleman who takes advantage of the American woman. At that point Americans were so, ‘Ohhh, someone from the Continent.’