Horrible Bosses 2 is both a comedy and an action movie; its' protagonists spectacularly idiotic schemes lead to all manner of mayhem. The first Horrible Bosses, bowing in 2011, was a hit, follwing a rich cinematic tradition of pitting hopelessly maligned employees against their superiors. Some of the more memorable horrible bosses in film history include Meryl Streep's humiliator-in-chief Miranda Priestly in The Devil Wears Prada, Gary Cole's all to real turn as supervisor Bill Lumbergh in Office Space, and Alec Baldwin's single, film-stealing scene as Blake, a sales "motivator," in Glengary Glen Ross. What the Horrible Bosses writers offered it's battered protagonists, Nick (Jason Bateman), Dale (Charlie Day) and Kurt (Jason Sudeikis) was the one option so many put-upon characters have dreamed of but few have dared to try; actually attempting to carry out their wish-fulfillment fantasy of killing their tormentors. Spoiler alert; they fail. 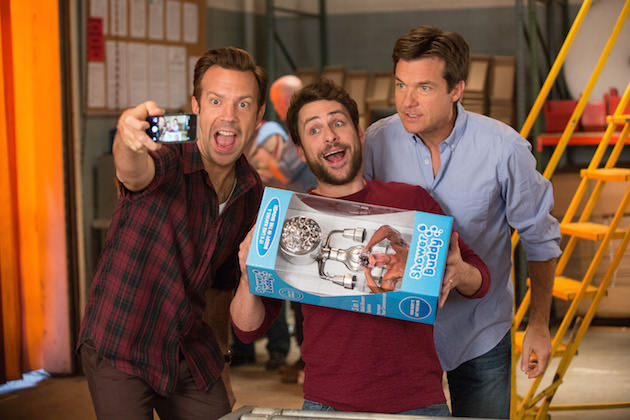 In Horrible Bosses 2, directed and co-written by Sean Anders, the boys are back and ready to take a legal, credible shot at working for themselves. They’ve got a dream in the form of a fantastically stupid product called ‘The Shower Buddy’, which aims to act as a kind of car wash for a person. The apparatus is made up of tubes and containers that fits over a person's body, dispensing water, soap and shampoo so they don't have do anything themselves. The Shower Buddy was conceived of by writing partners John Francis Daley and Jonathan Goldstein, who hit upon the idea of coming up with a product that simplifies a process that's already insanely simple.

In the world of the film, The Shower Buddy is a hot commodity, attracting a slick investor (Christoph Waltz) and his lunatic son (Chris Pine) who are just about to make Nick, Dale and Kurt's lives infinitely richer and more rewarding. Naturally this can’t happen or there’s no movie, and the lengths the three will go to win back their dream of financial stability and self-rule required a team of some of the best stunt, special and visual effects professionals in the business. There’s no face that can’t get punched, no home or business that can’t be broken into, no individual who can’t be forcibly shoved into the trunk of a car, and, most spectacularly, no amount of vehicular carnage (including smashed cop cruisers, cars launching off bridges, a mishap with a train) that they won’t engage in to see their dreams become a reality. As insane as their schemes are, who can't relate to the franchise's core message; answering to other people sucks. 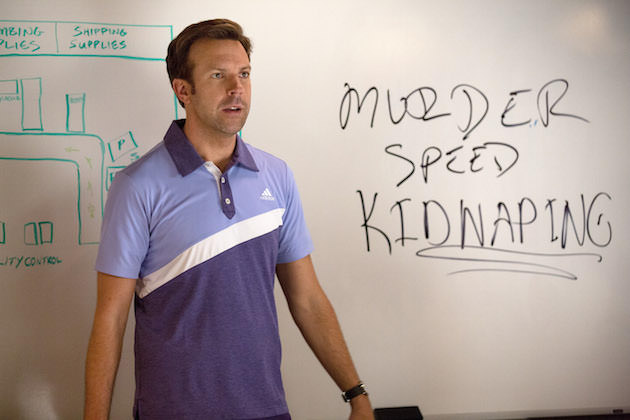 Harper knows a thing or two about complex chase sequences; he helped coordinate the bonkers highway mayhem in The Matrix Reloaded.

In order to really sell physical comedy, a man of Harper’s abilities is essential; real stunts pay off for much bigger laughs than ones fabricated on a computer. “For a physical comedy like this, it’s important to do things as real as possible because the comedy’s more impactful,” Harper says in the production notes. “You know what they say, it’s all funny until somebody loses an eye…and then it’s hilarious.”

Part of the scene’s conceit is that they guys are driving the wrong way in traffic, something Harper says is actually much more dangerous than doing a 70 mile-per-hour cannon roll flip. It took around 18 stunt people and camera car driver Majesky in order to pull this off.

Jamie Foxx, who returns as "MF" Jones, drives a vintage Ranchero in the film. The crew actually had three of them, each of which they had to completely overhaul. Harper’s team put in new tires, brakes and shocks. They also did some nifty work on the gears so that the stunt drivers could manipulate the cars in a way that would never be possible in a normal arrangement. By moving the gears into the rear, and creating a lower gear called a positive traction, Harper’s crew made it so both rear wheels turn at the same time, enabling the stunt driver to slide the car. Harper also had a hand-operated turning brake installed, complete with a master cylinder that goes to the rear brakes and locks up both rear wheels to increase the slide.

In order to protect his stunt drivers, Harper had bolts put into the floor to secure the seatbelts, and had them in state-of the-art harnesses. Large foam blocks were backed into the car’s undercarriage to absorb the punishment of repeatedly slamming into the pavement.

In order to make it look as if Jamie Foxx, Jason Bateman, Charlie Day and Jason Sudekis were the ones driving, careening, skidding, sliding and launching themselves into the air, visual effects supervisor Bruce Jones combined the stunt footage with 360-degree background plates to the actors’ performances in a mock-vehicle on a green-screen stage. That mock car was fully gimbaled (with a set of air bags, just in case), so when they simulated banking hard to the left or right, they could drop the car quickly and the actors would cram together as if they really were flying around corners at breakneck speed.

They also had the actors in the car when it was held almost 30 feet off the ground.

"We were, I don’t know, maybe 25 or 30 feet in the air in this car, and a guy kind of buzzes over on a crane and says, ‘We’re gonna tip the car 90 degrees,’ and buzzes away," Charlie Day said in the press notes. "Then they called action and the car just tipped over and, luckily it worked and we’re all still here but that could have been it. That could have been the end.”

The special effects supervisor had put a board where they could put their feet for support while the car was tipped by a crane, but because they were unaware of it they really felt as if they were falling over, adding credible terror to their performance. That's movie magic right there.

Horrible Bosses 2 comes out on November 26.