This holiday movie season brings us Hollywood’s next—and arguably biggest—Biblical blockbuster to date: Ridley Scott’s Exodus: Gods and Kings. Out December 12th, Scott’s rendition of the Old Testament tale chronicles the story of Moses (Christian Bale) as he leads the Hebrews to freedom in a revolution against his pseudo-brother, the vengeful Rameses (Joel Edgerton). With the help of screenwriters Steve Zallian, Adam Cooper and Bill Collage, Scott brought a film as grandiose in scale as the ancient Egyptian era itself, while the star-studded cast including John Turturro, Sigourney Weaver, Aaron Paul and Ben Kingsley came together to give audiences a truly immersive period experience. Scott hopes to do for Moses what he did for Maximus in Gladiator; give him the big screen adaptation his heroism deserves.

Now, if you haven’t caught up on your Old Testament reading, fear not, for Scott stayed virtually true to the Biblical basics. It’s almost as if his mega-budget retelling of the story of Moses came to him in a burning bush, if you can consider the hands of producer Peter Chernin hot and fiery. As Scott puts it in an interview with 20th Century Fox, “For the most part, great scripts don’t land on your desk,” but when Chernin presented him with a sandal and sword epic to rival the likes of Gladiator, Scott “climbed” into the film.

So, how did he pack the wrath of God — 10 deadly plagues, the parting of the Red Sea, 600,000 slaves riding horseback to freedom, a brotherly bond broken (not to mention the extravagant lifestyle palaces, temples, pyramids, tunics, eyeliner) of the Egyptians) — into a mere 142 minutes? Low and behold:  Part I of our story, Ridley Scott's Ten Commandments for the making of Exodus: Gods and Kings. 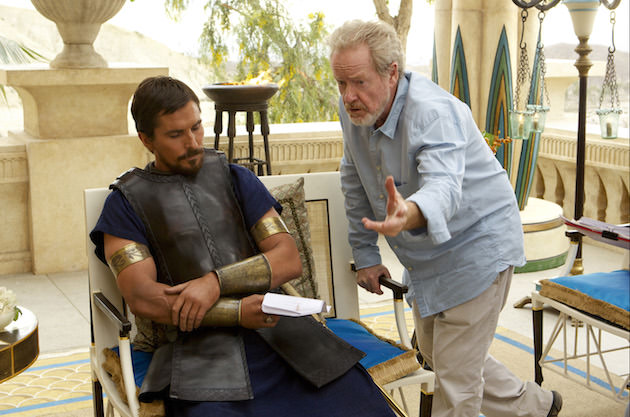 6 years ago Scott and Bale decided to work together, but it wasn’t until the character of Moses presented himself that this divine collaboration would occur. “I called him and said, ‘I want you to play Moses,’ and he said, ‘Oh no,'" said Scott in a featurette, but Bale would soon fulfill Scott’s prophecy after he studied up on the story of Moses.

It’s hard to imagine Bale as a BC war hero fighting his way to freedom (tunic-clad, mind you) after his Oscar-nominating performance in his last blockbuster, American Hustle. In fact, Bale was still trying to drop a few lb.’s when working on Exodus. “I was glad for the robes,” said Bale in a recent Q&A.

Other than hitting the gym, Bale studied up to surpass his “Sunday school” Biblical knowledge. Reading the first five books of the Bible, the Koran, “Legends of the Jews” by Louis Ginzberg and Jonathan Kirsch’s “Moses: A Life,” he quickly became schooled on all things Hebrew war hero.

He also watched 1956’s The Ten Commandments for holy guidance from his predecessor, Charlton Heston, along with his favorite sword and sandal cult classic, The Life of Brian, which happened to be his “guiding light” for the performance.

All of this research led to Bale’s controversial approach to the character. “I think the man was likely schizophrenic and was one of the most barbaric individuals that I ever read about in my life,” he said in a press conference. And some of it may have been true. Unlike Heston’s all-mighty take on Moses, Bale created a more relatable character. I mean, it’s not everyday that God comes to you in a burning bush declaring you’re “the chosen one.”

Speaking of staying true to character… 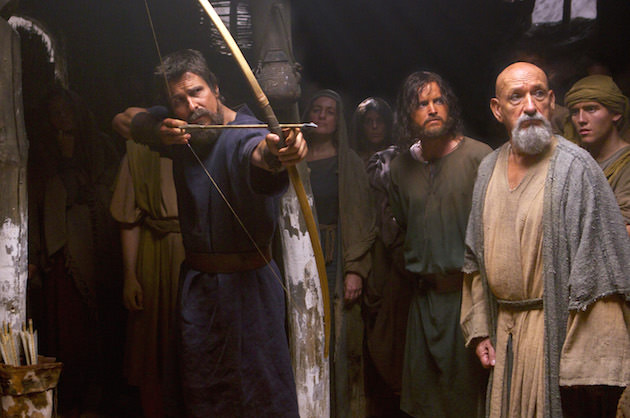 2. Thou Shalt be as Realistic as Possible.

It’s no surprise that Scott used his fair share of VFX (approximately 1,500 shots) in the making of Exodus, but he didn’t lean on technology to conquer this colossal endeavor. Over 100 horses for battle scenes, 400 frogs for a slimy, green epidemic, and a slew of camels were employed for the Israelite’s journey, and it’s evident that when it came to creating the realistic scope of such mind-blowing manifestations of God's wrath, Scott wasn’t horsing around. “We want a bit of insane,” he said in a featurette when describing the epicness of this flick.

“I was around a lot of horses who were kicking each other and trying to bite me and camels who, as we were crossing the red sea, like to relieve themselves a lot and you know, you just get used to less than glamorous situations, things bumping up against you, ‘What’s that against my leg? Oh that is what I think it is,’” said Bale in a press conference when describing his experience with his hump-backed co-stars.

Cast members also turned to camels for relief, comic-relief, as Bale and Edgerton would get through long takes sneaking up on Aaron Paul with a piping wad of camel droppings.

If that doesn’t gross you out, just wait until you see Scott’s take on the 10 plagues. 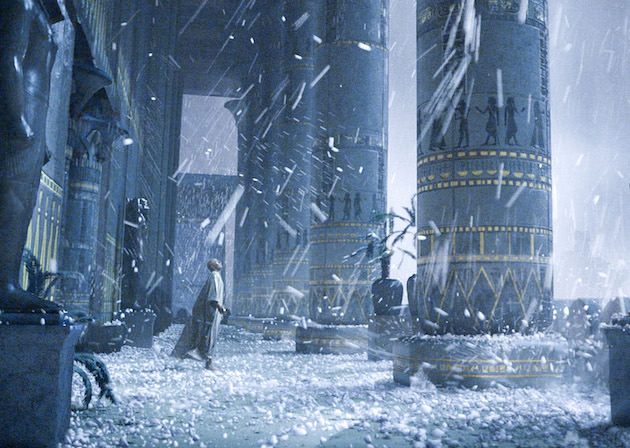 3. Thou Shalt Not Fear Grossing Audience Out.

It’s hard to imagine a sea of ribitting green frogs, swarms of locusts, a river running red with blood (not to mention the piles of rotting fish) or a wave of buzzing insects feeding on dead cows, but hold onto your stomachs, because that’s what Scott’s 3D depiction of the 10 plagues has in store. According to critics who’ve viewed select clips of the film, it’s gross. Really, really gross.

It’s fair to say that it can’t be easy capturing God’s wrath against Ramses on screen, but over 1,500 special effects and six 3D cameras filming throughout the entirety of every scene were used to illustrate the Pentateuch pandemonium.

That, and Scott’s knack for picking prime locations for the shoot… 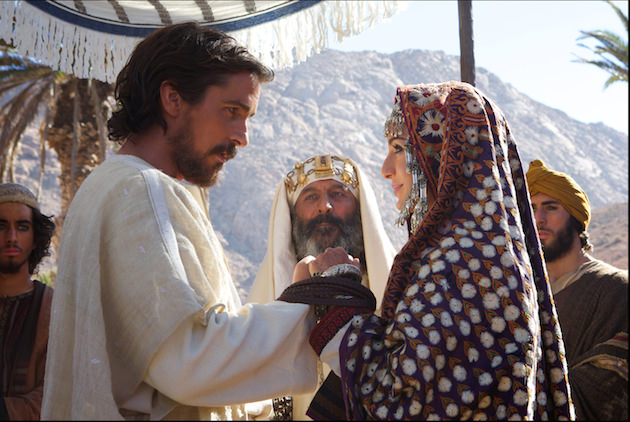 4. Thou shalt travel to the lands of London, Spain and the Canary Islands.

As Moses is known for freeing the Israelites from Egypt, Scott is known for his brilliant ability to transform sets into completely new worlds, and this is definitely the case for Exodus. Like many of Scott’s films (Alien, Gladiator and Prometheus, to name a few), location is crucial to his always-astounding visual landscapes. And with the help of production designer Arthur Max, Exodus transports audiences to Pharoe’s pyramids and palaces, Ancient Egypt’s bustling city of Memphis and the parting of the red sea, creating what is sure to be known as iconic imagery for the movie industry.

Filming began at Paramount Studios in London, United Kingdom. It was there where Scott captured interior images such as the royal bedrooms, the palace and the Hebrew scholars’ dwellings.

For the cityscape, the cast traveled to the Sierra Alhamilla, a largely barren and rugged terrain about 15-km northeast of Almeria city in Spain. But what really attracted Max and Scott to this location were the mountains reminiscent of Egypt. “That’s what drew us here, the texture and the color of this landscape,” said Max in a featurette with 20th Century Fox. And to establish the overwhelmingly intricate detail of the city, Scott used aerial and wide shots.

Last but definitely not least, Fuerteventura, the second largest terrain of the Canary Islands, would set the scene for the film’s largest location sequence, the parting of the red sea.

Speaking of the grand divide… 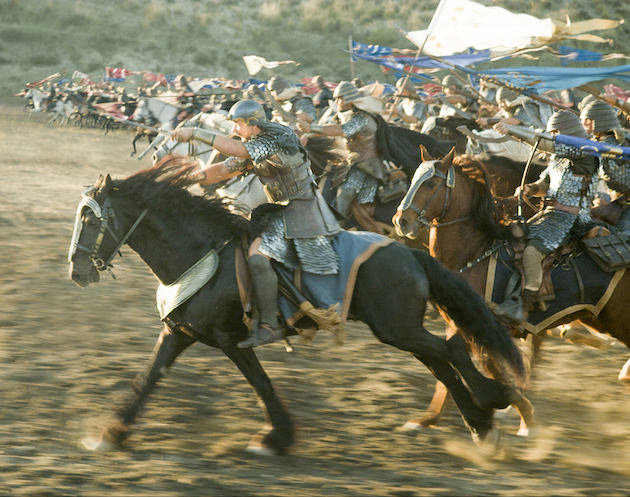 5. Thou Shalt Have Epic, we Mean Epic, Battle Scenes.

How does one recreate the biggest historical battle that’s ever been? Complete with 600,000 slaves and a royal army duking it out amidst waves reaching thousands of feet. It sounds like it could take a miracle, but Scott mastered God’s prophecy with the help of 700 crew members, 4,000 extras (not to mention the hundreds of horses) and some serious three-dimensional and digital goods.

“This is not going to look like a matte painting,” said Scott in an interview with Empire magazine. This is because Scott set out to build everything. From real gilded chariots, swords, shields and breast plates to digitally tiling the 4,000 extras to create a massive scale of 600,000 slaves, Scott’s hands on approach brings reality to this monumental battle.

His vision for a realistic fight had to translate to his cast, requiring them to perform the entirety of the fight scene. According to Bale and Edgerton, two minutes of filming felt like 45 when it was all said and done.

Not only was it physically exhausting for the actors, it was also the most difficult footage for Scott to shoot. “That sequence probably took more time than any other on this movie. We were mucking around on this beach, 11 miles of it, for days. It had mountain ranges behind it. That was the trickiest thing. I had to prepare plates on the assumption of the sea going back and then returning,”

And from a glimpse at the trailer, it appears as though Scott achieved his vision. As for Bale and Edgerton, shooting the battle scenes was a chance for them to fulfill a lifelong dream, all while having bit of fun.

“No matter how many films you’ve done, it never stops being so much bloody fun riding on a horse, slashing through people, having some fights; I mean that’s straight back to being 8-years old,” said Bale in a featurette. While Edgerton enjoyed the fights as “it’s a chance to play boys club and fashion yourself as the hero that you always dreamed and wished you were.”

Unfortunately, co-star Paul who plays Joshua, a friend and confidant of Moses, the experience wasn’t so exciting as he struggled to maintain his faux mustache while drive-heaving amongst camel poop.

And the best outfits for battle? Tunics, of course!

Check back in for Part II of Ridley Scott's Ten Commandments for Exodus: Gods and Kings.