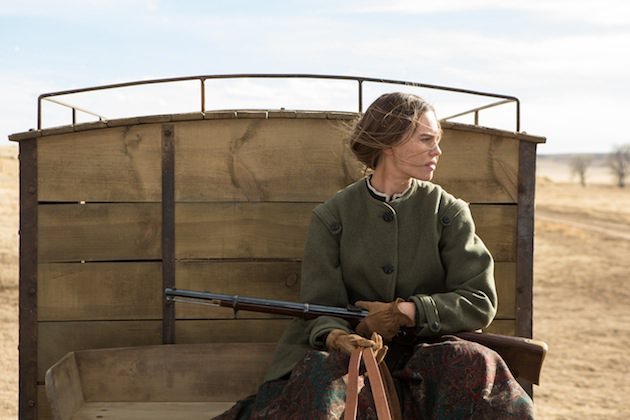 Harsh Conditions Bring out the Best in The Homesman‘s Crew

When we interviewed Marco Beltrami, he was particularly jazzed up about the work he did for Tommy Lee Jones’ upcoming film The Homesman. Beltrami is the type of composer who seeks out directors (as he did with Joon-ho Bong for Snowpiercer) and he was excited about Jones’ second directorial effort. The film’s set in the punishing Nebraska frontier in the middle of the 19th century. This inspired Beltrami to record a lot of his score outdoors, and use the wind, one of the elements that was particularly punitive in frontier times, as an instrument itself.

Jones’ film is based on Glendon Swarthout’s 1988 novel of the same name, which upended the usual focus for story about the American frontier; it's focus is on a particularly tough woman. The book’s centered on the story of the intrepid, resilient Mary Bee Cuddy (played by Hilary Swank in the film) who agrees to shepherd three troubled women in a wagon across the bitter realities of the Great Plains. Her charges were all driven insane by the brutalities of life on the American frontier, which is why Beltrami decided to take his music outside the comforts of a climate-controlled studio.

The Homesman was actually optioned years ago by Paul Newman, but it never made it to the screen. It would take many years until it finally came to the attention of Tommy Lee Jones, whose directorial debut, The Three Burials of Melquiades Estrada, proved his abilities stretched to behind the camera as well. Directing, starring and co-writing the adaptation (along with Wesley Oliver and Kieran Fitzgerald), Jones has brought Swarthout’s remarkable novel to the screen, in a production that was something of a microcosm of frontier life itself.

“It was important for me to explore the female condition in the mid-nineteenth century American West because I think it’s the origin of the female condition today,” Jones said in the production notes. He was working on Hope Springs with Meryl Streep while simultaneously working on the script with Oliver and Fitzgerald. He’d work on the script between takes, switching back and forth between the hardscrabble Nebraska frontier in the 1850s and a modern day romantic comedy, set 150-years later, in which he was playing a long-married man attending counseling sessions to work on his relationship. Streep would eventually join the cast of The Homesman (she plays the wife of the minister who has agreed to take the three women in), along with the aforementioned Swank, as Mary Bee Cuddy, the three insane women, played by Grace Gummer, Miranda Otto and Sonja Richter, and claim jumper George Briggs, played by Jones himself. Jones, Oliver and Fitzgerald completed the first draft in five days.

Jones, Fitzgerald and Oliver had to figure out a way to tease the backstories of the three insane women into the film so that their mental condition would be more than just a plot device to get Mary Bee to bravely escort them across dangerous territory. Swarthout’s novel doesn’t delve too specifically into their backstories, so those moments were imagined for the film. Jones referred to them as “memory hits,” which allowed them writers to get inside their minds and clarify what broke them down and made their journey necessary.

Those events are at turns horrific, macabre and Shakespearean in nature. Without giving too much away, what makes these three women snap would make anyone snap. They need to be escorted to a safe haven in Iowa, but no man will take them across the Nebraska Territory. It’s an expanse of bitter weather, American Indians who have every right not trust anyone, dangerous fellow settlers and the acute loneliness of the Great Plains in the middle of the 19th century.

Enter Mary Bee Cuddy. Out of compassion she agrees to the unenviable task, but requires another person to help her get the women across the territory. She enlists the schemer George Briggs, who offers the upright spinster the perfect, devilish counterpart. Briggs is a claim jumper, an army deserter and, as Jones says, “an independent man of rather low character.”

The Homesman was inspired, in part, by the 20th century minimalist master Donald Judd. Judd was a self-taught frontier photographer who was drawn to the bleak, seemingly blank, massive expanses of the plains. Jones brought the production to Northeastern New Mexico to stand in for Nebraska. This part of New Mexico, especially in the spring when they shot, is harsh, with unpredictable weather. It didn't make it any easier how remote their set was. “That was critical because the landscape itself is a very important character in our movie,” Jones said. “My vision of the film was minimalist because of the landscape, which mostly consists of a line that divides heaven and earth. The line is usually straight, which creates an emotional environment as much as a natural one.”

Along with Beltrami, Jones was aided by an impressive creative team that included production designer Merideth Boswell, costume designer Lahly Poore and cinematographer Rodrigo Prieto. Jones relied on their research into 1850s Nebraska to help aid him in portraying the landscape in New Mexico. 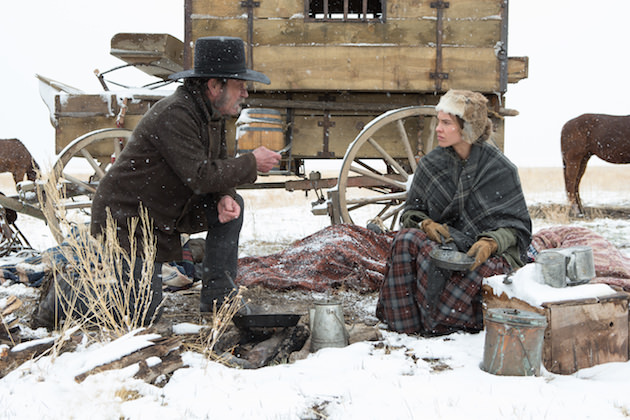 Boswell knew that Jones’ wanted his minimalist approach to mean more than just an austere look that was aesthetically pleasing. “He talked to me about the geometry of emotion,” she said in the notes. “Think about the way a lone figure standing in an empty field evokes something specific. Early on he showed me a piece by the Chinese artist Ai Weiwei—a two-foot tall tea house made of tea sitting on a field of tea. It’s an icon of a house. You can see it reflected in Mary Bee’s home and barn.”

Boswell and Jones also found inspiration from the photographs of Solomon Butcher, a man who spent 40 years documenting the primitive sod huts and settlements of Great Plains settlers in the late 19th and early 20th century. “The research was gut-punching,” Boswell said. “They had so little and they often shed the few possessions they had on the way. One image that particularly touched me was of a woman who had hung a plain wooden box next to her sod hut, hoping a songbird would nest there.”

The photographs also helped the creative team steer clear from the typical western motifs of cowboys and gunslingers. The reality of this specific Midwestern setting is it was much more about how one simply survived in conditions so unforgiving rather than having it out with rivals using six-shooters.

The 42-day shoot encountered some challenging weather. Spring in New Mexico is a notoriously unpredictable time, with conditions changing almost minute by minute. This was great for cinematographer Rodrigo Prieto’s visuals, but sort of a pain in the ass for everybody else.

Jones and Prieto had initially conceived of The Homesman as a black and white film, but after a lot of testing, they realized the New Mexico landscape offered subtleties of color that help emphasize the harsh beauty of the land people like Mary Bee and Briggs ventured across. 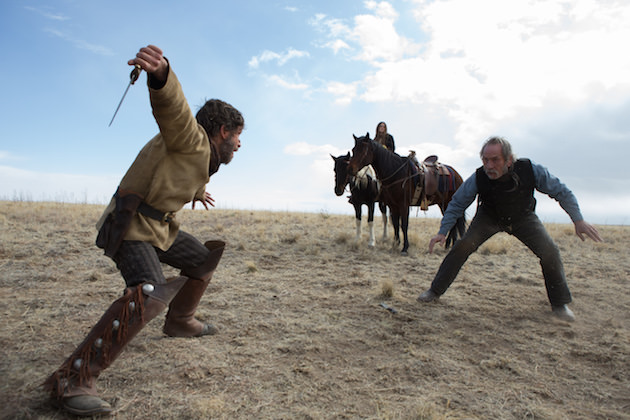 Another debate was between film and shooting digitally. They decide to combine the approaches, using film during the day and digital at night. “Ultimately it came down to texture,” Prieto said. “We had intended to use digital, but the image was too pristine.” The texture of film stock felt more appropriate to the story they were telling, as well asto the visual language of a western. In low-light and for night scenes, they used the Sony F-55 digital camera, and then simulated the grain in post production.

Prieto and his crew operated their cameras wearing protective gear and goggles. “The dust that blew up got in our eyes and into the cameras,” Prieto said. “We had to make sure the lights and cameras stayed in place. There was extreme cold and the unpredictable snow flurries meant constant changes, so we had to be very flexible and nimble.”

Jones wanted to Prieto to use his camera to emphasize the immensity of the landscape. “We are working with just horizon and sky, land and wagon. Tommy reference the placement of the horizon by deliberately placing the sky in relation to the ground. We always shot the wagon flat on, so it was just a box and a line, which helped make the composition complex and full.

It was a shoot that tested everyone. At one point, Boswell and her team had to rebuild a hotel in 60-mile-an-hour winds. “It was so cold that paint froze in the cans overnight,” she said. She would drive 211 miles every day to get to the set. The crew felt some of the discomforts the characters in their story were feeling.

One of the crucial elements of The Homesman is the discomfort, and the resilience, of the characters. Long before Gortex, Uggs and ski gloves, people were living in incredibly cold temperatures using wool and animal skins that were hardly water-resistant. Costume designer Lahly Poore nailed the period details on a tight budget. She got her job by not only knowing what kinds of materials were available then and understanding the period details, but by talking about the costumes as they relate to the characters. In one scene, Swank’s Mary Bee is wearing a bonnet, in another, she’s got her high-buttoned wool coat, tan gloves and her rifle. 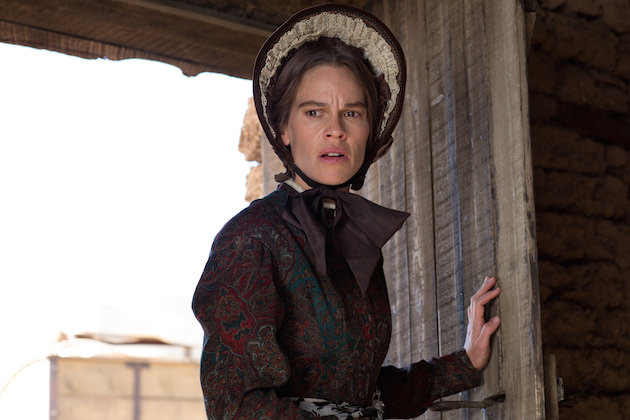 Jones and his team planned the shoot so the topography would match the geography of Mary Bee’s journey, from the open and blasted plains landscape to the gentler terrain of Iowa. They filmed some of the final scene’s in Westville, Georgia, which stood in for the Iowa. Westville is made up of authentic from the 1850s buildings that the crew had break down, move to Lumpkin, Georgia and reassemble them there. They also had to move their entire production from New Mexico, which included the horses, the mules, the wagons, all the camera and grip equipment, and they had to do it fast. In all they managed to move the majority of the entire production 2,000 miles in a day and a half. Boswell noted that the move to Georgia was a major relief after the weeks spent in the badlands of New Mexico. The wagons, which they had built by an Amish company, even seemed to enjoy their new environs. “In New Mexico, it was so dry and cold that the wood would shrink. Once we got to Georgia, it seemed to blossom again.”

And now back to Beltrami, who used the wind as instrument, harnessing the element that was part of what made life on the plains so difficult. Along with his partner Buck Sanders, who helped create the “wind piano,” Beltrami drew inspiration from the work of audio archivist Tony Schwartz, who used the sounds of the natural environment to build music. “The landscape itself contains harmonic elements, and we used that as inspiration.”