It’s time to get excited about a comic-book movie that’s not directed by Christopher Nolan or Joss Whedon, that doesn’t star or co-star or have a cameo by Robert Downey Jr., and that's not centered on a brooding dude, or a rich, conflicted dude, or a bunch of dudes with various powers. We're talking about a film that’s poised to make a household name of not one woman but two. Your excitement will be warranted, as it looks increasingly likely that the prolific, extremely talented director Michelle MacLaren, the woman behind some of the most relentlessly exciting television episodes of the decade, will be directing Gal Galdot in Wonder Woman. And scene.

Film geeks and TV nerds can join me in saying right on, because MacLaren is one of the best in the business at directing action. She brings to mind another woman who is one of the finest directors of action on the planet, Kathryn Bigelow, as both of them have an incredible way of making chaos coherent. MacLaren’s ability to stage and direct complicated, breathtaking sequences has been evident to television people for years. So if the news that broke yesterday holds, and MacLaren is indeed Warner Bros. choice, Wonder Woman just became an even more intriguing project than it already was.

So who exactly is MacLaren and what has she done? She’s a Canadian television director and producer with a ton of top-notch credits to her name, including three of the most compulsively exciting shows of the decade; Breaking Bad, The Walking Dead and Game of Thrones. Recently, she’s won back-to-back Emmys for her work on Breaking Bad, in 2013 and 2014, directed an episode of the upcoming Breaking Bad prequel, Better Call Saul (starring Bob Odenkirk as the lovably loathsome Saul Goodman), and also pitched in to direct an episode of HBO’s The Leftovers this past season. She's been busy.

Let’s take a quick look at some of her past work.

MacLaren got connected to Breaking Bad’s Vince Gilligan after making her directorial debut on the season 9 episode of The X-Files, “John Doe,” which Gilligan wrote.

MacLaren directed eleven episodes and produced 31 (not including those she directed). She directed the powerful season five mid-season finale, “Gliding All Over,” written by Moira Walley-Beckett, which had Walter White in full Michael Corleone mode, ordering the assassination of ten inmates in three different prisons in a montage that one could argue pays gleeful homage to The Godfather II’s famous baptism by fire montage. You know the scene, the one where Michael stands there as his sister Connie’s son is being baptized while, simultaneously, we watch the murders he ordered of the heads of the five families. Naturally, the megalomaniacal Walter White outdoes him, needing to rid the world of ten men who know his identity. Luckily for us, Walter had MacLaren as his director, so the sequence of the murders made for irresistibly gruesome television.

Or take the exquisite tension she builds in the episode “To’hajilee,” the thirteenth episode of the final season. Shot (with permission) on Navajo land, “To’hajilee” is one of the most thrilling episodes of any show in recent memory. It pits neo-Nazi Jack and his gang against Hank and his partner Gomez in a massive shootout, which included exploding squibs, hundreds of actors, crew and moving parts that all cohered into a breathtaking hour of television. 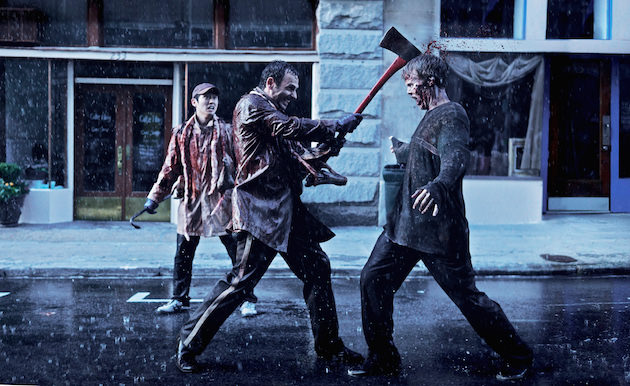 MacLaren directed three episodes of the series, beginning with just the second episode of the series (and one of the best episodes of the show, period), “Guts.” Series protagonist Rick Grimes and series regular Glenn are trapped inside a department store surrounded by walkers and  are in desperate need to figure a way out. MacLaren managed to fit several of the series most iconic images into this one episode. One was the perfectly framed, utterly simple shot of Rick taking an ax to a walker’s head in the photo above. The second was Rick and Glen figuring out that the only way they’re going to survive the herd of walkers was by smearing guts all over themselves (hence the title), as well as dangle severed limbs on their bodies, so they can pass through the walkers unnoticed. 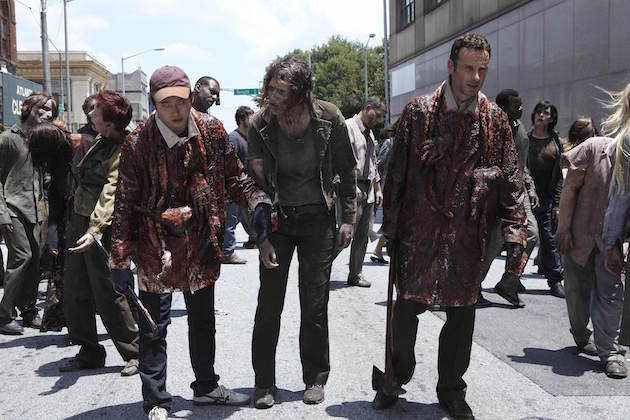 MacLaren has directed four episodes of GOT, and two in particular, “The Bear and the Maiden Fair” in season three and “First of his Name” in season four included action sequences that stand out in a show filled with them.

In “The Bear and the Maiden Fair,” MacLaren filmed a set piece that included an actual live bear. Brienne’s been thrown into a pit where she has to fight a massive bear with nothing but a wooden sword while being jeered and mocked from above by the crowd. Luckily, Jamie Lannister has come back to Harrenhal, having suffered from an attack of conscience (something new for him) for having left her, and jumps down into the pit and helps her fight off the bear and escape. The sequence is thrilling.

In “First of his Name,” MacLaren films the spectacularly gruesome demise of the psychopath Karl, a character she so memorably framed in another of her episodes, “Oathkeeper,” drinking blood from the skull of his former commander, Jeor Mormont. Jon Snow has ridden into Kraster’s camp and faces off against Karl in single combat. Karl’s gains the upper hand, and is about do Jon in when one of Craster’s wives, Sissy, stabs him from behind. When Karl swings around to dispatch her, GOT fans were treated with one of the most memorable deaths in the whole show; Jon gets to his feet and drives his sword, Longclaw, through the back of Karl’s skull and right through his mouth.

Now imagine what MacLaren will be able to do on a grander scale with Gal Godot has her muse? She won't be asked to shock and awe us with gore, like she's done on TV, but will put her uncanny knack for filming jaw-dropping action to use on the big screen.
Get excited.