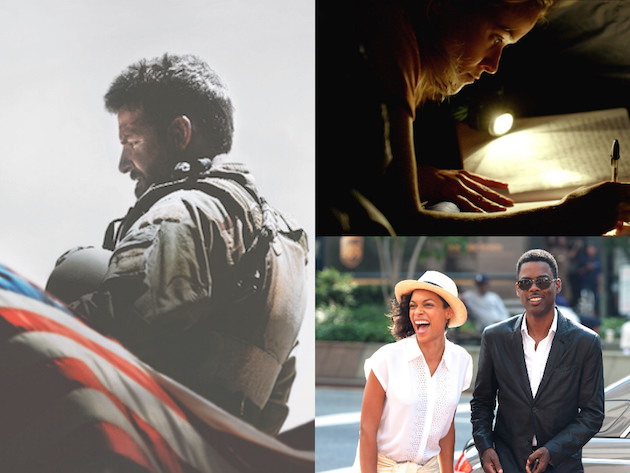 Beyond Interstellar: 12 Films to Put On Your Calendar

After months and months of speculation that Christopher Nolan alone seems able to create around his films, the general public will get a chance to weigh in on his most passionate project yet, Interstellar. You’ve already heard about Interstellar. Everyone has. What we thought we’d do is give you a quick cheat sheet on some upcoming films, leading you right to Christmas day.

It’ll be a very strong week for serious film, with Foxcatcher, The Homesman and Rosewater all coming out.

The Homesman, as we wrote yesterday, is that rare western than follows the struggles of a frontier woman, Mary Bee Cudy, played by Hilary Swank. Directed and co-starring Tommy Lee Jones, the film was shot in conditions that mimicked the harshness of the great plains in the mid-19th century.

Rosewater is Jon Stewart’s directorial debut, focusing on an Iranian journalist who was detained in Tehran for over 100 days and brutally interrogated…after he appeared on a Daily Show skit with correspondent Jason Jones, and was accused by the theocracy of being a spy. Here’s a great interview by New York Magazine’s Chris Smith with Stewart on the reasons behind his writing this film in the first place, and the summer he spent shooting it in Jordan.

(We are fairly certain you’ve heard about The Hunger Games: Mocking Jay – Part I, so moving on…)

The Imitation Game is one of those stories that would be unbelievable if it weren’t true. British mathematician and logician Alan Turing was a war hero during World War II, only you’d never know it by how he was treated by his own government. Benedict Cumberbatch is as convincing as Alan Turing as any actor would have the right to be.

Reese Witherspoon produced and stars in Wild, playing Cheryl Strayed, on whose memoir the film is based. Strayed hiked the Pacific Crest Trail, thousands of miles all told, after her mother’s death and the dissolution of her marriage. This is the second book Witherspoon has optioned and produced for the screen this year, the first was about a different kind of woman dealing with her dissolving marriage called Gone Girl.

In Anderson’s Inherent Vice, we’re dropped down into the narcotized world of L.A. detective Larry “Doc” Sportello (Joaquin Phoenix) as he investigates the disappearance of a former girlfriend.

Chris Rock’s Top Five rode a wave of great buzz after bowing in Toronto, with some saying this is his funniest film ever. Rock is Andre Allen, a comedian turend film star who is determined to become a serious actor. The film is framed around his upcoming wedding to a reality TV star, while the New Yorker’s Chelsea Brown (Rosario Dawson) interviews him for a profile.

The sixth and final film in Peter Jackson’s Middle Earth hexalogy finally arrives with The Hobbit: The Battle of the Five Armies, as does Quvenzhané Wallis’s turn as Annie, but those films are getting plenty of hype, but for a quieter game in town, check out The Gambler, which finds a much skinnier Mark Wahlberg playing Jim Bennett, a man who plays every side in a high-stakes gambling ring where he’s put up his life as collateral.

Bradley Cooper stars as Navy Seal Chris Kyle in Eastwood’s film, the most lethal sniper in U.S. history, a man whose reputation among his fellow soldiers earned him the nickname “Legend” and put a price on his head as a prime target of insurgents. This is only part of the story, however, as Kyle’s life at home took an astonishing, heartbreaking turn.

The story of Louis Zamperini, so memorably told in Lauren Hillenbrand’s book, is now a major motion picture directed by Angelina Jolie and adapted by the Coen brothers (after earlier drafts by William Nicholson and Richard LaGravenese). Unbroken chronicles Zamperini’s life, from Olympic runner to a soldier in World War II to a prisoner of the Japanese.

Who doesn't want to see Meryl Streep as a witch and Johnny Depp as the big bad wolf? Into the Woods, which began its' life as a Steven Sondheim musical, gets the big screen treatment with a bonkers cast and the costume work of our recent interview subject, Colleen Atwood.