Three major films about three tumultuous periods of American history will hit select theaters on Christmas Day. That two of the three films are directed by women is something to be excited about, and that one of those women is a woman of color, and that her film is covers one of the most crucial three months in American history, marks this single day as one of the most significant of the entire year in film.

You've no doubt heard about Angelina Jolie’s Unbroken (covering the story of Olympian and American soldier Louis Zamperini’s imprisonment by the Japanese during World War II), and how it opens alongside of Clint Eastwood’s American Sniper (the story of Chris Kyle, the most prolific sniper in American history), two films already spoken about as possible Best Picture contenders. What might surprise is you they will very likely have competition from Ava DuVernay’s Selma, which follows Dr. Martin Luther King and his contemporaries in one of the most crucial periods of the civil rights movement, three months in 1965 that changed the course of American history.

Selma screened at AFI Fest, earning rapturous applause from the audience and reviews that have been uniform in their praise for a film that many filmmakers, for justifiable reasons, have shied away from making for the past fifty years. Scott Foundas of Variety writes that “DuVernay’s politically astute, psychologically acute MLK biopic makes the civil rights movement seem like only yesterday.” Stephen Farber of The Hollywood Reporter writes that “star and director triumph in this vibrant look at the civil rights movement.” From HitFix to The Wrap to IndieWire, Selma seems poised to make stars of its director and lead actor, David Oyelowo.

Starting out her film career as a publicist, DuVernay worked her way through the ranks, directing shorts, documentaries, and indie films, and now she seems ready to make the leap to bold director of major feature films by having had the courage to take on a film about a man and a movement that have been resistant to cinematic portrayals in the past (in fact, King has mainly served in peripheral roles as many writers and directors have shied away from tackling his iconic life – as Variety's Foundas notes, the only King biopic ever attempted was the three-part 1978 TV mini series King). No one should be surprised if we have two women in the Best Director category at the Academy Awards; everyone should be thrilled.

“This project began and ended with David Oyelowo,” DuVernay said at the AFI Fest Q&A, moderated by none other than Alfre Woodard and speaking of her lead, the man who passionately advocated for the chance to play a role few people would have the courage to attempt. Oyelowo’s commitment to a project he had been thinking about for years galvanized not only DuVernay, but co-star and producer Oprah Winfrey as well. “He invited me to come on board the project," DuVernay said, "this subject matter is nothing I’d ever thought about tackling. I’m more of a black indie hipster romance kind of gal, so trying to tackle Dr. King and deconstruct what that is, and think about what the civil rights movie genre is and has been, and why I haven’t maybe responded to it as I have other genres of films as a film lover, and how I would possibly try to make a film about that as someone who’s not usually interested in historical dramas…I don’t think I would have done it without David on board, I would have had too much fear around it.” 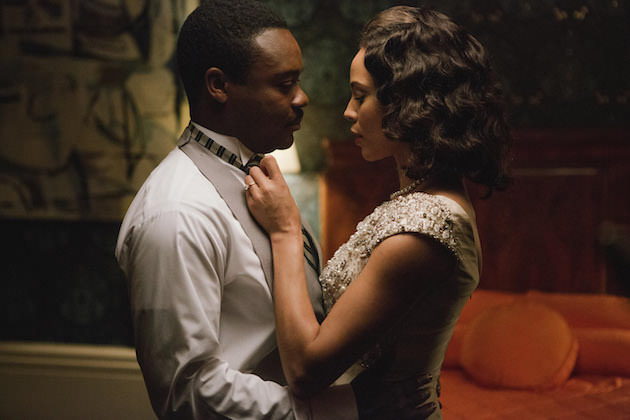 The film centers on the Selma-to-Montgomery marches in 1965, where despite the passage of the Civil Rights Act in 1964 which legally desegregating the South, Selma and places like it down South were still a dangerous place for black men and women. One of their most basic rights, the right to vote, was being denied by the white power structure in a variety of ways; outright intimidation, laws meant to keep black voter turnout low and attempts to make voter registration as difficult as possible. Alabama was run by the legendarily racist Governor George Wallace (Tim Roth), and it was into this maelstrom that King and his team entered.

“David is the reason I came on board, too,” Winfrey said. Winfrey not only was a producer, but plays hospice nurse Annie Lee Cooper, a woman who got drawn into King's march. Oyelowo and Winfrey had previously worked on The Butler together, and he had told her that Selma had been a dream of his for some time, so he sent her an audition tape of himself playing King. “And I saw that tape and I said, ‘Yeah, I can see King in you, it’s not quite there, but I can see it’s on its way there. And I want to do whatever it is I can to help you get it there, so that’s what got me to say yes.’”

One part of the Selma-to-Montgomery marches that must have been extremely difficult to shoot was the bloody, game-changing confrontation between King’s marchers, led by John Lewis of the Student Nonviolent Coordinating Committee, and Hosea Williams, of the Southern Christian Leadership Conference, and the Selma police, led by a Sheriff Clark, on the Edmund Pettus Bridge (for a brilliant account of this event, in all its horror, read Louis Menand’s “The Color of Law” in The New Yorker). The hideous attack by armed, gas-mask wearing police officers (some on horseback) on the unarmed, peaceful marchers was broadcast on television, forcing Americans far removed from both Selma and the struggle of black Americans to watch, right there in their living rooms, what the country's racism really looked like. “That evening,” Menand writes, “forty-eight million viewers watching Judgment at Nuremburg on ABC had the movie interrupted for a fifteen-minute film of the attack. There was no voice-over. The only sounds were the thuds and clubs, reports of tear-gas canisters being fired, the rebel yells of Clark’s posse, and, the constant, hysterical screams of the victims.” Foundas describes the scene in the film for Variety as "an expert action setpiece in which every thud of a nightstick lands with a sickening force."

The film also focuses on the political chess moves of King, LBJ (Tom Wilkinson) and George Wallace, as King and his allies plan another march and the rest of the country becomes much more invested in the outcome of what he, his team and the marchers. After the incident on the George Pettus Bridge, the eyes of the world seem to be on Selma.

Woodard brought up the fact that Olyweleo is an Englishmen with Nigerian roots, and asked where he connected with this huge moment in American history. “I’ve had the privilege to live on three continents as a black person. The first place was England, then it was back to the motherland, Nigeria, and now I’ve lived here for seven years. And the thing I learned living in Nigeria is exactly what Lorraine Toussaint says in the film, that we’re born of Kings. We are a people of deep pride, incredible culture and indescribable power. And unfortunately on the continents of both Europe and America, that has been denigrated over time. And I don’t think it’s any accident that somehow, this great man’s name was King. And the dots joined in that way for me, and very soon after my wife and I moved to this country, I was told, from above, that I would play this role, on the 24th of July, 2007. I couldn’t believe it, so I wrote it down, that’s how I know the date, and a process of my birth, my experiences, my faith, time and these incredible people lead me to this moment.”

DuVernay noted that there hasn’t been a feature film made from a studio about Dr. King’s life at all until Paramount backed this project, and she was careful to note that Selma isn’t about his whole story, but a slice of it. “We thought it was a great way to approach his epic story, his life, cradle to the grave, can’t be contained in two hours, so what we did was look at this incredible three months in his life where he led this campaign that changed the course of American history in Selma, Alabama. And I think it’s a great way to get inside a life that’s really too big for a two hour movie to hold. David’s an extraordinary actor and an exquisite human being, so that combination is a director’s dream. He is a very deeply rooted, you want an actor who can go really, really deep, he never does anything surface, it’s always layers and layers underneath, and for someone like Dr. King, an American icon and world leader, you need someone like that.”

Common plays James Bevel, an influential and outspoken leader amongst King’s contemporaries. “He was really a revolutionary amongst King’s team,” Common said at the screening, “he and his wife Diane Nash were like the rebels in the team. He wore this hat that looks like a kufi, so he stood out. I loved this specific story because you get to see that Martin Luther King was a part of a team, he was a representation of the people. So it’s not just that this one man did this by himself, but this one man was chosen as the voice and the face, and he had the heart and the spirit to do it, but there was so many people behind it, so many people who we don’t even remember their names, so many people who sacrificed.”

Tessa Thompson, who plays Diane Nash, said one reason she thinks the film will resonate is it covers the incredible hard fought right to vote for African Americans that it still being obstructed. “It was really important to tell that story, and I think by taking a smaller chunk you get to really look at that time as opposed to painting it in broad strokes. I think the Civil Rights movement is something we think we all know about, but this movie teaches us thing that we didn’t.” Thompson said of her director, “Ava is an incredible director, female or not, but I think because she is a woman, when thinking about telling this story she wanted to pay close attention to the women in this story and make sure that their voices were heard, and that you got a sense of the way in which women contributed to not just the Civil Rights movement, but to the fabric of America. Not that a man couldn’t have done that, but it was really great to see a woman, and a woman of color, do that.”