The most all encompassing war in history has been depicted on screen countless times. Filmmakers have been portraying the horrors, and heroes, of the "good" war, from D-Day to the Battle of the Bulge to Pearl Harbor, from every conceivable angle. In just six years, from 1939 to 1945, World War II took the lives of more than sixty million people, some 2.5% of the global population, and filmmakers have been grappling with the immensity of the war ever since.

American filmmakers have attempted to recreate major battles in Europe from the American point of view (Steven Spielberg's Saving Private Ryan), battles in Japan from the Japanese point of view (Clint Eastwood's Letters From Iwo Jima) and searching portraits of the psychology of soldiers (Terrence Malick's The Thin Red Line) to name just three. European and Japanese filmmakers have made hundreds of films about the war, and a recent German television series, Generation War, which followed five young German friends as the world is on the brink of war, was a huge success in that country. The series depicted the lives of five patriotic characters who, save for one, never become committed Nazis. "The movie says that young men and women were seduced and then savagely betrayed—brutalized by what the Nazis and the war itself put them through," wrote The New Yorker's David Denby. "Their complicity, in this account, is forced, never chosen. Aimed at today’s Germans, who would like, perhaps, to come to a final reckoning with the war period, Generation War is an appeal for forgiveness."

Whether or not you believe Generation War's director, Philipp Kadelbach, and writer, Stefan Kolditz, have created a realistic picture of what young Berliners were really like at the time, their attempt to show a different side to the world's most thoroughly cinematically scrutinized war might resonate with writer and director David Ayer (End of Watch, Training Day). Ayer, a veteran himself, committed himself to making a World War II film unlike any other with Fury, which opens October 17. His goal was to depict the reality of what it was like to be in the armored divisions fighting in World War II — the life expectancy of a tank crew was six weeks. Ayer wanted to show not only what it was really like to be a part of a tank crew, but how ferocious, and awful, the war was right up until the very end.

Ayer's covering a part of the war that has rarely been shown on film — when the Nazi empire was all but finished but still the war continued on, soldiers still fighting and dying in what, in retrospect, seems like senseless carnage. Ayer has said in the production notes that he aimed to show “a different world from your usual war movie, where we celebrate victorious campaigns like the invasion of the European continent, or D-Day, or the Battle of the Bulge, these famous battles that American troops have taken part in."

Fury takes place on a single day in April, 1945. Don “Wardaddy” Collier (Brad Pitt) is a tank commander responsible for keeping his five-man crew alive. “He’s responsible for their operations, their morale, and especially making sure that they are operating as a machine,” Pitt said in the production notes. “His calls are going to determine who walks away and who doesn’t. But at the start of the film, they’ve lost one of their five members, and a new kid [Norman Ellison, played by Logan Lerman] is thrown into our family. It’s not just that he’s new, it’s not just that he has no tank experience – he’s actually a threat to our survival; if he can’t perform the whole crew is in danger and people will die. He comes in with great innocence, and the question is, how do you raise a child in a day? Wardaddy has to get him calloused and get him performing, to ensure the safety of others.” 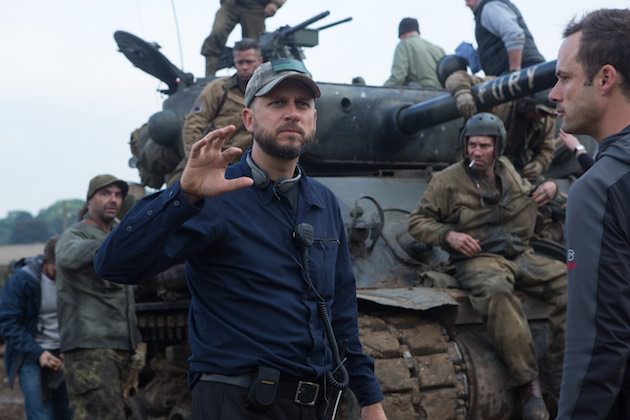 In order to create a credible portrait of the final days of World War II, and the operations of a tank crew, Ayer relied on tactical and military advisors, real tanks (five models of the M4 Sherman, and, for the first time ever on film, a German Tiger tank), his own commitment to research, and, most crucially, the memories of World War II veterans. One of those tactical advisors, Kevin Vance, said that Ayer’s approach created a visceral, wholly unique WWII film. “In most World War II movies, we have this association with ‘the good war’ – and it is, but over 60 million people died in World War II. That’s a dichotomy that hasn’t been fully explored, and that’s what David demanded of this film.” Perhaps no advisors to the film were more crucial than the veterans of the 2nd Armored Division who served in World War II who met with the cast.

“David is ferocious about authenticity,” says Pitt. "We got to meet several vets who were all in their 90s; they had survived D-Day landings, and the Battle of the Bulge…it was a very humbling experience to sit in their presence and listen to their stories. They had very visceral descriptions of what it was like to be in the tank: the heat, the exhaust, it was oily, the smell of death was always in the air. Most of them were undertrained, they were underequipped, they were dealing with incredible hardships and weather, lack of food, lack of sleep. And they had to push on under the most harrowing of conditions.”

Four veterans in particular provided first-hand accounts of what their experiences were like inside a tank in some of the most ferocious battles in the war.

There’s Paul Andert, who at 17-years old in 1940 lied about his age to get into the army. Andert became a staff sergeant with the 41st Infantry in the 2nd Armored Division during the war. “Patton became our division commander – he was strong in educating us,” he says in the production notes. Andert remembers Patton making it clear to the men that each of them had an opportunity to show leadership. “Patton says, ‘You don’t push spaghetti; you pull it’” – that is, as a leader, if you make a move, your men will follow. Andert recalled these words time and time again, in battle after battle. “He put the fight in us – he put in the idea to get out there and move. Don’t stay still.”

George Smilanich explained to the cast and crew how every member of his unit needed to know everyone else's job. “Everyone on the crew could do anything the other guys could do. We could rotate if we had to – if we lost somebody during a battle, one of the other crew members could step in and take over, whatever job it was. We could drive a jeep, we could drive a halftrack, we could drive a tank. It was like a big, happy family – if I wanted the assistant driver to take over, I’d trade places with him; if the gunner wanted to step out, the assistant driver would step behind the gun. The commander gave the orders and told us what we should and shouldn’t do, but that’s how it was. And when we lost somebody and somebody else came in, he joined right in.”

Ray Stewart, eventually a bow gunner in a tank crew, was only 21 years old in the spring of 1945. In this way (and a few others), he was something like the character of young Norman Ellison in the film. “I had four guys in there who were trained by Patton, and I was the new guy,” he says in the production notes. “I was going to try to do the best I could. My tank commander at the time was trying me out. The gunner eventually moved into his place; he became the platoon leader. Of course, we had other guys that moved into his place.”

Donald Evans, who served in a reconnaissance company of the 66th Amor Regiment in the 2nd Armored Division, described for the cast and crew what it was like to be inside a tank when the enemy was firing at you. “When they’re shooting those machine guns and it’s bouncing all around you, you’re feeling it in your armored car or your tank – just hearing it shakes you up,” says Evans. “There’s nowhere to hide."

The veterans offered invaluable details as they told their stories. One example is how every fifth bullet from the tank’s machine gun is a tracer, and so many of these super-hot tracers are fired they can melt the barrell. Then there's how soldiers could differentiate between outgoing and incoming artillery (when it's coming at you, it whistles). For an American inside a relatively thinly armored, tiny Sherman tank fighting against the colossal German Tiger, their greatest asset was the Sherman's mobility. These details, and hundreds like them, helped Ayer and his cast and crew create a credible, realistic World War II film.

“Veteran accounts are hugely important, because they bring it to life,” says David Rae, one of the military technical advisors on the film. “They give you the actual ground truth of how a crew fought through different theaters – through Normandy, North Africa, through the low countries, and finally to Germany, that final push. They give you interesting stories that you can grab hold of and emotionally attach yourself to.”