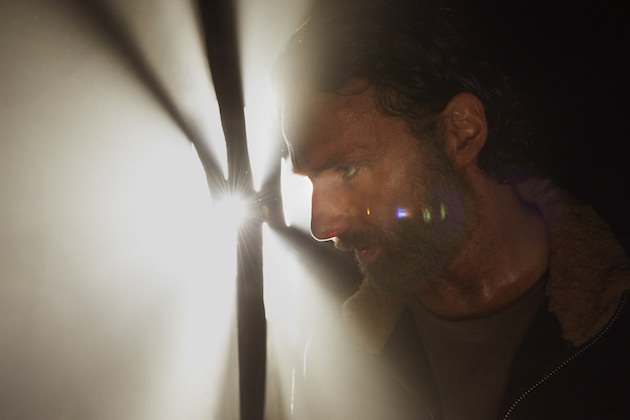 What to Expect From Season Five of The Walking Dead

This Sunday at 9 p.m (EST), Rick, Daryl, Michonne and The Walking Dead gang are back. Cable’s most popular show has survived a rotating cast of showrunners (Scott M. Gimple is now their third) and the slings and arrows of disgruntled fans and critics (especially during season two's extended stay on Hershel's farm) by a zombie-like ability to maintain just enough momentum to keep fans interested. “The show reinvents itself every eight episodes,” said Gimple in AMC's production notes, a member of the Dead team since he joined as a writer in season two.

And this has been true; while meandering from Robert Kirkman's original graphic novel at times, The Walking Dead has made up for occasional narrative lapses and a lot of turnover at the top by relying on Kirkman's source material to keep feeding new, intriguing players into the narrative. Just when the show needed a boost after season two, it got katan-wielding Michonne (Danai Gurira) and the unhinged, murderous Governor (David Morrissey) pumping in fresh blood, both their own and the blood they shed. The show has managed to introduce a slew of fresh (or mostly dirty) faces to give the central cast a much needed jolt. Not to mention the fact that every few episodes, a significant character bites it (often by getting bitten by a walker). 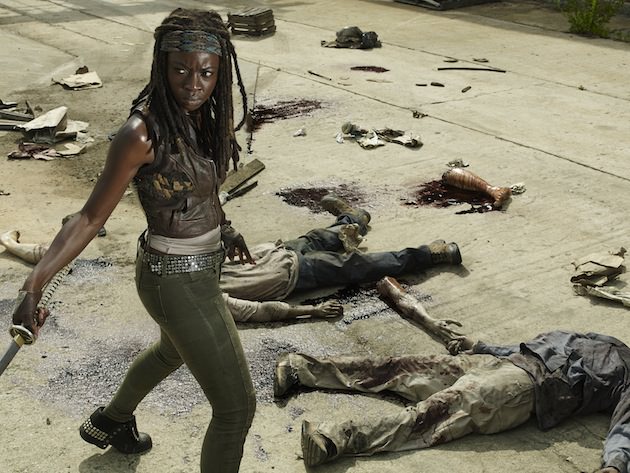 While imperfect, The Walking Dead has almost always been riveting, especially during the past two seasons. The Governor was the first credible human villain we got in a long time (Shane, memorably played by Jon Bernthal, was more of a brooding romantic competitor to Rick), and the two-season build up to the war between Rick and the gang (now beefed up, both physically and theatrically, by two The Wire alums Chad L. Coleman, as Tyreese, and Lawrence Gilliard Jr., as Bob, with a third The Wire star set to be introduced this season) was both spectacular and awful (RIP Hershel). The good guys got separated, and season four saw them all, one way or another, heading towards the potential safety of Terminus.

Whether you consider it a guilty pleasure or one of TV’s most reliably intense dramas, what The Walking Dead has never been is boring — even the much ballyhooed season two, spent entirely on Hershel's farm, had its moments. A bit of research into the show's fifth season points to what sounds like the most ambitious sixteen episode arc yet.

Where We Left Off

When we last left our survivors, many of them were trapped inside a railcar inside Terminus, a "sanctuary" advertised through road signs scattered across the state as a place where "those who arrive, survive." Only by the time Rick and the rest of the scattered crew arrive, Terminus seemed to be less a DMZ from walker combat than yet another false paradise ruled over by sociopaths, a little like a hippy version of season three's Governor-led, conservative-seeming Woodbury.

Where's Beth? No clue. But Carol and Tyreese are making their way towards Terminus, after their horrific suburban vacation in the 14th episode of season four, "The Grove." Don't remember it? How about two words as a refresher; sororicide and filicide.

Prepare for a Super Bonkers Premiere 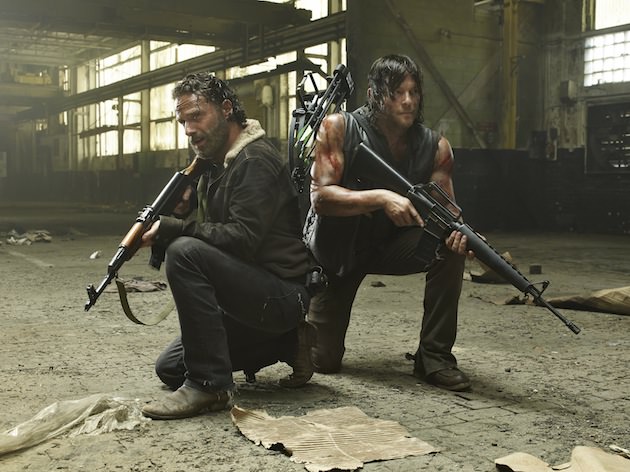 The reviews are in for the premiere, and they're all pretty much in agreement that the premiere is thrilling. Variety calls it "a dazzling adrenaline rush filled with suspense," and MTV News writes that it's "undoubtedly the most (quite literally) explosive, relentlessly violent and ultimately satisfying season-starter the show has ever delivered."  Gimple says in the AMC production notes that the premiere of season five is one of the biggest episodes they’ve ever shot. “There are a lot of moving parts. Every single one of our characters in the railcar has a moment within it.”

Lauren Cohan, who plays Maggie, is one of several members of the cast who couldn't get over the scope of the script. "It is a complete action movie. This episode is so exciting, so disturbing, and so real. This world is escalating."

Executive producer Gale Anne Hurd told Entertainment Weekly that the upcoming episodes are the series most ambitious episodes.  "Not only the action set pieces, but also the level of emotional weight that’s brought to bear on the characters."

Series star Andrew Lincoln, who plays the endlessly tormented former cop Rick Grimes, is back to being the group's leader in the premiere. “Rick is very much back,” Lincoln says in the AMC production notes. “He has made peace with the fact that there is a very brutal side to him, but he has a humane side too." Lincoln says that after receiving the premiere script, his first thought was, “How are we going to shoot this?!" His second thought was, 'How is this going to fit in 47 minutes?!"

Sonequa Martin-Green, who plays Sasha, had a similar thought. "It's always interesting when you read a script and go, 'Okay, that's impossible.'" Norman Reedus, playing arguably the series most beloved character, Daryl, says that Gimple’s premiere episode is insane. “Fans are going to freak out.”

Michael Cudlitz, who plays Sgt. Abraham Ford, the man committed to getting to Eugene (Josh McDermitt) to Washington D.C. with Eugene's potential cure, says that he thinks the script for premiere was one of the most satisfying hours of television he's ever read. "There are so many moments where you will have genuine excitement for what is happening. Things you want to happen, do happen; and things you can’t believe happen, happen." 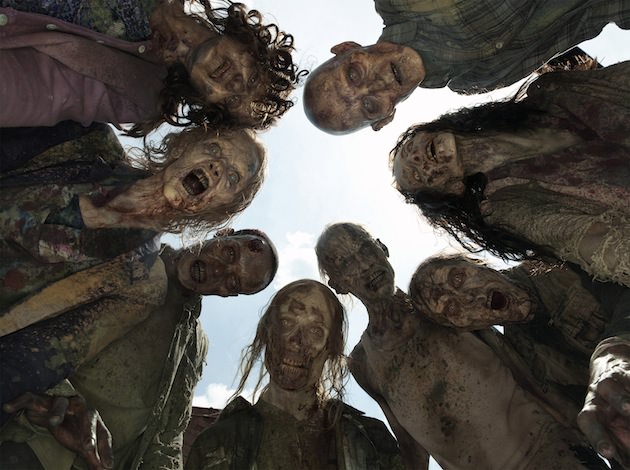 One of those constant changes Gimple was talking about was of the walkers themselves. “The walkers this year that Greg Nicotero and his team are designing do reflect that we are deeper in our timeline. They have been around longer, are more damaged, and are really horrific. We are using the philosophy that you will see these walkers and what they have been through in their physiology. They are still just as dangerous.”

Before Nicotero goes to work making ever more revolting walkers, the Walking Dead team brings in potential zombies to their zombie school. “I love zombie school,” says Hurd. “People come in and we see if they fit on the show. You don’t want to destroy the believability of this world we’ve created. There were some standouts this season. I think fans will be very impressed.”

Nicotero worked with his KNB FX team to create arguably the grossest, most believable zombies ever committed to the screen for season five. Chad L. Coleman, who plays Tyreese, says that the walkers this season even out-gross the flame-walkers from last season's episode 'The Grove.' 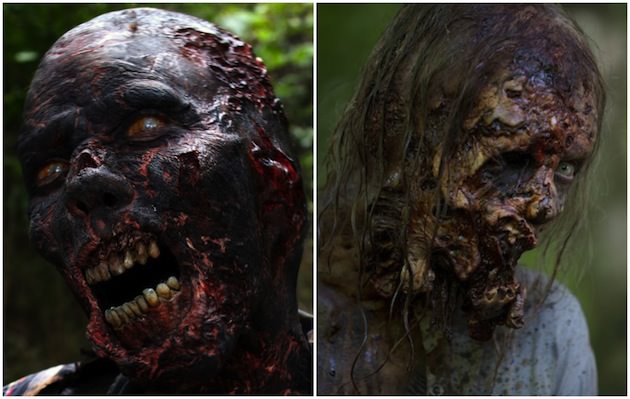 “While there is no shortage of walkers, they are the predictable threat,” Hurd says in the production notes. “A lot of it has to do with the threat you pose to the people around you after you have done something that crosses the line. Can you regain your humanity? Are you safe to be around? That’s certainly one of the things we are examining. Just look at Rick last season compared to season one when he rode into Atlanta on horseback. It’s all putting our characters into situations in which they find out what they are really capable of.”

Hurd told EW that season five will see the show move back into urban environments, a much more dangerous proposition for the survivors. "The show has spent a lot of time in primarily rural settings. But you’re never going to find the cure to the zombie apocalypse in the sticks. Now with them embarking on a mission, they have to reenter what we call the City of the Dead. There are many cities of the dead that they’ll have to encounter to complete their mission. So not only does it make it more difficult because the number of walkers, but also there are more hiding places in which their human antagonists can lurk. So however stiff and difficult the stakes have been up until this season, now they’ve been raised even further."

There are also new characters, including the leader of the Terminus, Gareth, played by Andrew J. West. Gareth doesn't appear to be as outwardly psychopathic as the Governor was, but when you found out how he's been leading the people of the Terminus, and what they do to survive, he'll likely out-crazy the Governor in the long run. The aforementioned third The Wire alum joining the cast is Seth Gilliam, who will play Father Gabriel Stokes, a major figure in Kirkman's graphic novel.

Perhaps the biggest threat to our characters, however, comes in the existential sense — it's themselves.

The Walking Dead fans have never been too far gone to return to the show, and this Sunday's premiere will likely prove that once again.