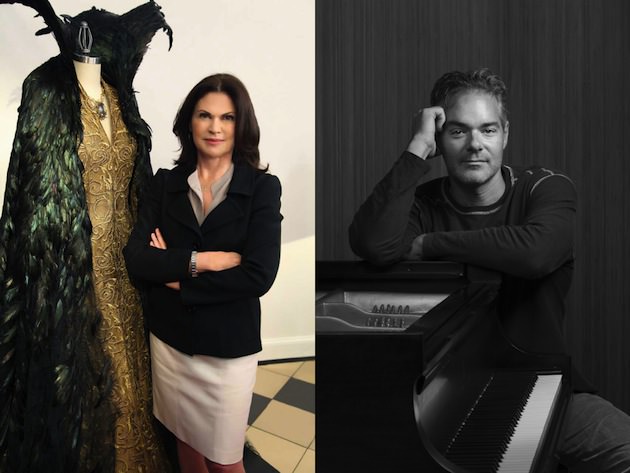 The Middleburg Film Festival, at just two years old, offers a strong program of films and an appreciation for the many talented craftsmen and women who make them. This year, the festival is honoring two below-the-line filmmakers, our raison d'être, who are both giants in their field. The Credits is heading down to Virginia today to get in on the action.

The honorees are costume designer Colleen Atwood and composer Marco Beltrami. The Distinguished Costume Designer Award will be presented to Atwood on Friday night with a retrospective of her most memorable costumes, followed by a masquerade ball in her honor. Beltrami will receive the Distinguished Film Composer Award on Saturday, and the Shenandoah Conservatory Symphony Orchestra will perform world premieres of concert suites from his scores, including The Giver, The Horseman and World War Z.  As a Halloween treat, Beltrami’s score for Scream will also be performed.

Both Atwood and Beltrami have done singular, fascinating work. Atwood is, simply put, a legend. She’s won three Oscars, and she’s never gone more than four years in a row without being nominated, starting with her work on Little Women in 1994 and most recently for the costumes in Snow White and the Huntsman in 2012. Atwood’s work has run an incredible gamut of styles, eras and genres. She’s been one of Tim Burton’s longtime collaborators, beginning with the sensational costumes she created for Edward Scissorhands, then Ed Wood, Mars Attacks!, Sleepy Hollow, Planet of the Apes, Big Fish, Sweeny Todd, Alice in Wonderland and Dark Shadows. She’s done sci-fi (impeccably, one might add) with Gattaca, Western with Wyatt Earp, thriller in The Silence of the Lambs and her glorious, Oscar-winning period work in Memoirs of a Geisha, to name just a few of her films.

Beltrami is no less prolific or inventive. Just look at this past year for proof; he composed scores for the breathtaking Snowpiercer, the adaptation of the YA sci-fi novel The Giver, the gritty crime neo-noir The Drop and the international spy thriller The November Man. Beltrami's known for approaching film music in a way that subverts genre expectations, like his humanistic, searching scores for science fiction (evidenced in both Snowpiercer and The Giver) and horror films (Scream, Carrie). He came at the western 3:10 to Yuma with relentless rhythms and thundering percussion mixed in with lonely, sparse sounds that added an extra layer of tension to a very underrated, thrilling film.

The festival begins today, carrying on through Sunday. It opens tonight with Richard LaGravenese’s adaptation of the hit musical The Last Five Years, starring Anna Kendrick (Pitch Perfect, Up in the Air) and Jeremy Jordan (NBC’s Smash). Highlights include a conversation with LaGravanese, a panel discussion with The Imitation Game's director Morten Tyldum, screenwriter Graham Moore, actor Allen Leech and General Michael Hayden, former director of the CIA.

With more than 30 films screening over four days, The Credits is excited to be a part of Middleburg's second year. We'll be conducting interviews, seeing some films, and, should time permit, enjoying a few glasses of wine, one of the festival's signature means of relaxation.