The Life of the Mind: Making The Theory of Everything

In an introduction to a first edition of Stephen Hawking’s groundbreaking popular science book A Brief History of Time, Carl Sagan tells a story about how he happened to wander into the ancient ceremony of the investiture of new fellows into the Royal Society. On that day, Sagan noticed in the front row a young man in a wheelchair very slowly signing his name in a book. “A book that bore on its earliest pages the signature of Isaac Newton. When at last he finished, there was a stirring ovation. Stephen Hawking was a legend even then.”

Stephen Hawking is the rarest of breeds; an iconic scientist. His A Brief History of Time has sold some 10 million copies since its publication in 1988. In its' pages, Hawking conveys the majesty and awe of cosmology with nimble prose, making subjects such as the Big Bang, light cones and the uncertainty principle digestible to the layman. More current editions have included wormholes, time travel and the possibility of a universe without a Big Bang origin. What it didn’t include were a bunch of equations, as Hawking’s first editor at the Cambridge University Press, Simon Mitton, convinced him early on that for every equation in his book, his audience would be halved. The book contains a single equation: E = mc2.

What just about everyone knows is that Hawking is a genius who has spent the majority of his life in a wheelchair, and that he uses his a computer to speak. He has suffered from Lou Gehrig's disease (in Britain, it's referred to as motor neuron disease, MND), which has battled since he was 21-years old. The original diagnoses gave him two years to live. Having beaten every odd in the book, Hawking’s fame is inextricably coupled with the fact that he's accomplished so much despite his disease. His reach is such that he’s appeared on an episode of The Simpsons (1999’s “They Saved Lisa’s Brain) and is often mistakenly believed to have been the computerized voice in Radiohead’s “Fittier Happier” – it’s actually frontman Thom Yorke’s. (He did, however, give his voice to parts of the Pink Floyd song "Keep Talking".) Everyone's heard of Stephen Hawking, yet practically nobody knows what he's really like, nor that the creation of his most seminal work would have been impossible without his first wife, Jane.

That will likely change now with the release of The Theory of Everything. Written by Anthony McCarten and directed by James Marsh (Man on Wire), The Theory of Everything aims to shed light on his personal life and the young, healthy man that came before A Brief History of Time, the wheelchair and the computerized voice, and detail how he and his wife Jane managed a marriage amid a death sentence, and how Jane helped her ailing husband create one of the most seminal works of 20th century.

It begins with screenwriter Anthony McCarten, whose long-standing fascination with Professor Hawking, specifically how someone who became so severely physically compromised wrote his seminal book. McCarten marvels in the production notes that Hawking's physical deterioration ultimately allowed him to compose his communications at the agonizing rate of a one word per minute. "Here, in one man, was an unprecedented juxtaposition of extraordinary mental prowess and extraordinary physical incapacity.”

While the film follow's Hawking’s courtship of the brilliant, beguiling Jane, and his creation of “A Brief History of Time,” the more crucial text to the film is its source material—Jane Hawking's “Travelling to Infinity: My Life With Stephen.” Her memoir relates the incredible story of their marriage, with Jane Hawking’s candid portrayal of two extraordinary people in extraordinary circumstances providing McCarten with what would become the thrust of his script. 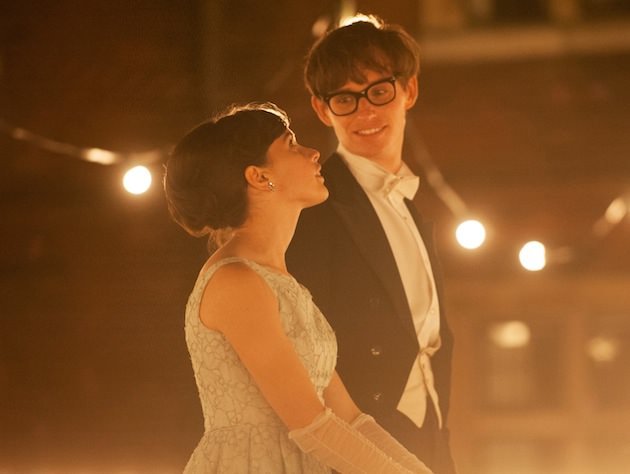 “It’s a marvelous love story between two people, incredibly intense and challenged in the extreme: first by the physical decline, and then by the advent of fame in their lives. When news of his imminent death proved exaggerated, and two years became 10, then 20, their situation demanded that their love take bold and unorthodox forms if it was to survive. Theirs was a love story without precedent," McCarten said in the production notes.

McCarten began adapting “Travelling to Infinity” without guarantees; he met with Jane at her home, and continued to talk to her over time, but no promises were made. It would take years to secure the legal rights to the film.

Eventually the script landed in the hands of director James Marsh, an Oscar winner for his incredible documentary Man on Wire. Marsh shared the same image of Hawking in his head the majority of the world had until he received the script. "I had the fixed image of Stephen Hawking as the great scientific mind with the wheelchair and the voice machine,” he said in the production notes. "He found the fascinating point of view, which was to tell the story from the perspective of the woman who was falling in love with an able-bodied man; she then makes the critical choice to stay with the man she loves when he is diagnosed with a terminal illness." 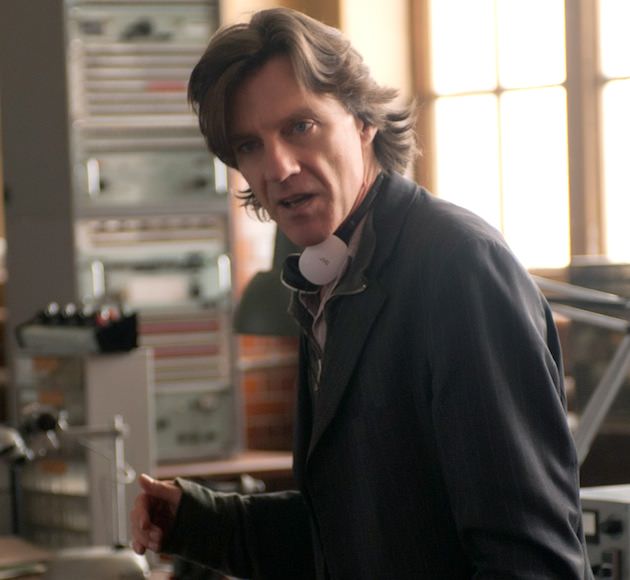 The director was also drawn to the script because its' spirit recalled Man on Wire, which looked at tightrope walker Philippe Petit’s high-wire walk between New York’s Twin Towers. The Theory of Everything is also about a man who manages to transcend conventional human boundaries and limitations. "There is definitely an affinity, and there is also a cosmic irony: Stephen is physically constrained and yet mentally he is able to go wherever he wants. His mind can and does travel to the outer limits of the universe, but his body is confined."

Casting is always crucial, but in this case the film not only falls apart if the wrong person is cast as Hawking, but is potentially insulting. Hawking the human being is much more than his famous brain, his illness, his computerized voice and even his well documented sense of humor. The Stephen Hawking portrayed in Jane’s book is a conflicted, complicated, and for a time desperate and depressed individual. This is to say nothing of having to portray someone who gradually lost the use of their body, from a vibrant and healthy 21-year old to a middle aged man with the use of only a few muscles, someone who had to refashion an entirely new way of communicating with the outside world. 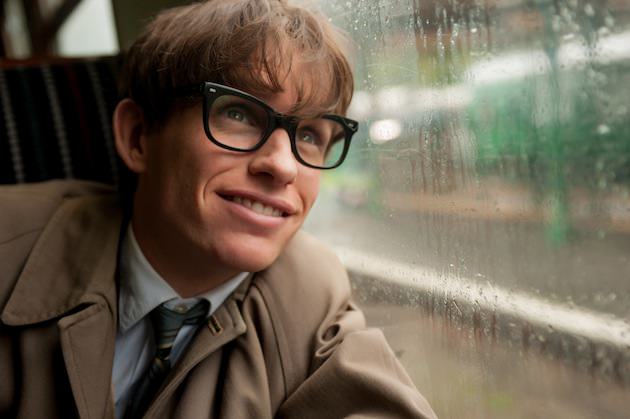 Enter Eddie Redmayne, best known in America as Marius in Les Misérables. He pored over every detail of description of Hawking in the book and in his research. "Jane discusses in her book how Stephen had incredibly expressive eyebrows,” Redmayne said in the production notes. “That was something I spent months in front of a mirror working on.” Eventually Redmayne got a chance to meet the man himself, and noticed that how Hawking’s ‘yes’ is sort of a smile, and his ‘no’ is nearly a grimace, but they only show in a few of his facial muscles, meaning he’d have to learn how to isolate those.

The job of teaching him fell to movement director Alex Reynolds. Reynolds schooled the actor on just how the he could portray the various degenerative stages of motor neuron disease on-screen. Reynolds had recently worked on World War Z, where she created the movement for the fast-moving zombies, working with animation director Andy Jones and VFX supervisor John Nelson. In World War Z, Reynolds was working to help create movement en masse, creating a core zombie team, casting and training location specific zombies and refining their movement on set. Her work here was, of course, on a completely different scale but no less daunting.

Reynolds work was aided by Redmayne's own research. He obtained permission to visit motor neuron disease patients both at a clinic and at home. Because no existing documentation of Hawking's early stages of deterioration exist, Redmayne and Reynolds consulted with a motor neuron disease specialist to chart the progression of the disease. This research allowed Redmayne and Reynolds to create a chart (the higher the numbers, the later stage of deterioration) that would show had advanced the disease was for a particular scene. During the 48-day shoot, which, like most films, was not shot in sequence, this chart proved invaluable. 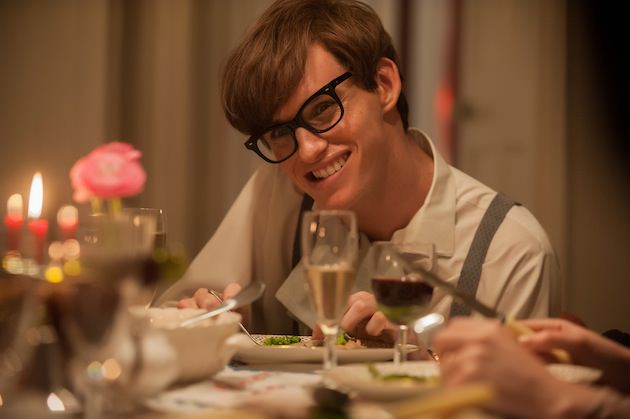 "Eddie prepared for months, to be ready to give multiple levels of performance," McCarten said. "He had to be aware on any given day for a scene, 'Is this stage four of my voice?' 'Does this mean stage three of my body?' He would go from 'a 4.3 day' for one day's work to, for a scene set 10 years earlier and filming the next day, 'a 2.7 day.' Each day required all of his talent, discipline, and intelligence."

The chart was used by many members of the crew, including Marsh and cinematographer Benoît Delhomme. "It demonstrated what was possible and not possible for Stephen at a moment in time," Marsh said. "This had a big impact on how Benoît shot a scene, and on how we framed it."

The cast and crew had to help Redmayne on his huge task of engaging the audience with no more than just a cast of his eyes and a small shift of the body. "This is not easy for an actor to pull off, and it came at a physical cost to him. Every day he was in some sort of stress position that he had to maintain for hours at a stretch, while still projecting and making the character emerge out of the disability," Marsh said. No member of the cast or crew had as much pressure or as hard a role as Redmayne than Felicity Jones, who played Jane Hawking. 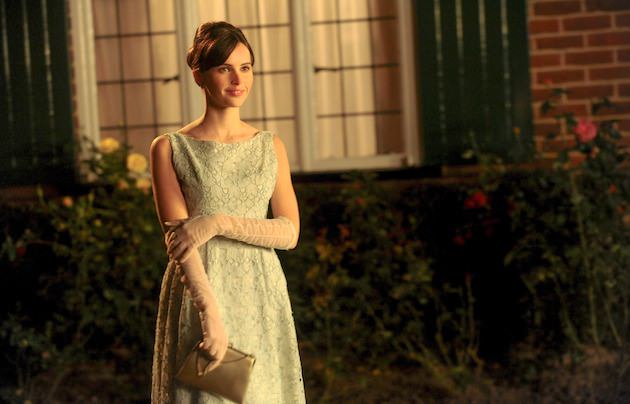 While it might seem that it takes less effort for Jones to portray the healthy, vibrant Jane than Redmayne's transformation, that would be a simplistic view. Jane Hawking was far more than a support system and cheerleader for her husband's illness and genius, she was a brilliant woman in her own right, and one who had to make agonizing decisions, over and over again, to keep their love, and Hawking himself, alive.

Jones met with Jane Hawking early on, and found a woman who had dedicated her life to Hawking while at the same time retaining her own identity. "It was important for her to be recognized in her own right, which is why she continued on with her studies while caring for him and raising a family. What this woman accomplished!" Jones said in the production notes.

Jones' role required her to consistently show paradoxical feelings. She had be loving while also feeling put upon, burdened, frustrated, hopeful, despairing.

"There were days on the shoot when our work mirrored what Stephen and Jane actually went through," Redmayne said. "I would have to say to Felicity, 'I can't actually do what it says in the script, you're going to have to lift my arm here.' This would be in the middle of an already difficult emotional scene; she would have to work around my limitations." 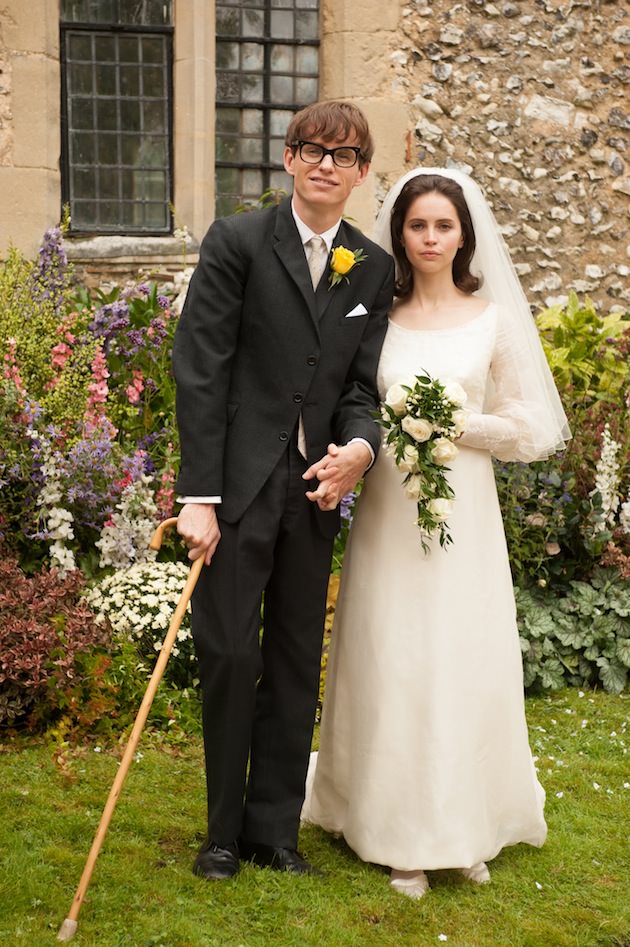 TAGSFocus Features The Theory of Everything