So you’ve got a protagonist named John Wick who’s a widower with a puppy. The puppy's named Daisy. Daisy’s pretty much all this guy has and cares about in this world, a gift from his late wife. John Wick’s a retired freelance consultant living quietly and sadly, just he and Daisy all alone.

One day John goes to buy some gas. He’s got a sweet ride, a 1969 Boss Mustang. He’s minding his own business, filling her up, when a weirdo asks him “how much?” John’s a bit confused until he realizes this creep (Game of Thrones Alfie Allen) is asking about the car. John tells him it’s not for sale and is just about to go his un-merry way, but the creep’s got a goon. Now the goon leans into John’s car window and tells him to have a really nice day in a thick, Eastern European accent. We all know Eastern European accents in movies are only given to bad guys. And musical prodigies. 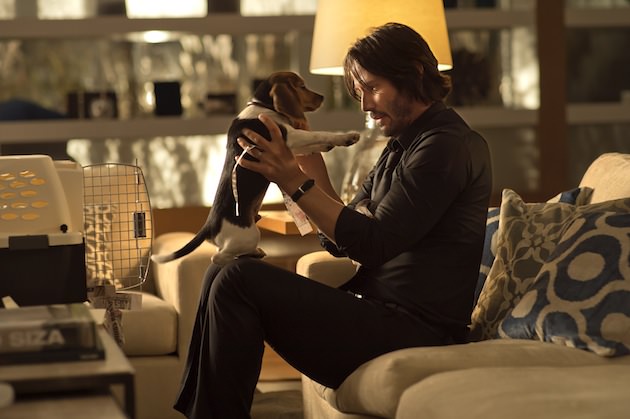 So the creep and his goon eventually break into John’s house, beat him unconscious, and kill Daisy. Also they steal the car. The thing is, John is played by Keanu Reeves, and the freelance consultancy job he had retired from was more like freelance assassinations. In fact, John Wick was the most feared, brutal assassin in the whole of the New York underworld. And now he’s pissed.

There’s your set-up for John Wick, and for a certain segment of the population (which includes us), seeing Keanu Reeves in action mode is a joy, no less in a subversive, wild story that’s filled with great actors (Ian McShane, Willem DeFoe, Bridget Moynahan, John Leguizamo) and staged and shot by two stunt legends. John Wick has Reeves working with his stunt double from his Matrix days, Chad Stahelski, a giant in the stunt world who here is credited as the director of the film (his partner, another David Leitch, helped direct the film as well but was given a producer credit by the DGA.) Stahelski and Leitch have made a hell of a career for themselves, including founding 87Eleven, which uses the their 20 plus years of stunt industry experience to help filmmakers design their action. 87Eleven is one of the most elite stunt groups in the world. 87Eleven doesn't want to get hired onto action films, they go out and create, shoot and edit their own original stunt sequences and pitch those to the director of a major action film. They've done this on The Bourne Legacy, The Hunger Games series, Wolverine and Jurassic World  to name a few. For John Wick, the two went a step further and co-created one of this fall’s most deliriously giddy action films. 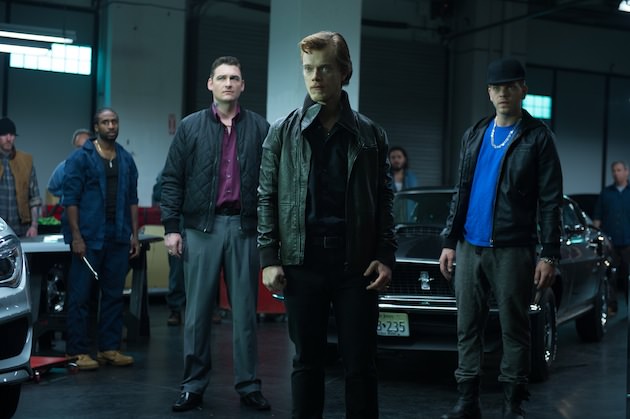 It was actually Reeves idea to contact Stahelski and Leitch, who together had become two of the most coveted second unit directors in Hollywood. Their transition from stuntmen to filmmakers, however rare it might seem, makes sense when you consider the arc of their careers leading up to founding 87Eleven. As stunt performers, they were always talking to actors about how their performance, cinematographers about the construction of the shot, and in general having a very solid sense of how all the pieces need to fit together. Then, once they founded their company and began filming and editing their own scenes, learning how to make the action more dynamic, more immediate, how to slow it down and speed it up, the progression to directing your own film is much less of a leap.

With the duo on board to direct, it wouldn’t be just Reeves’ John Wick getting all the great moves, the film is teeming with characters who fight with their own signature styles. Take Viggo (Michael Nyqvist), who uses a brutal Russian system of combat called Sambo. The directors don’t just use stunts to wow the audience, it is a part of how they build their characters. “I started stunt training in Stockholm, where I live,” Nyqvist said in the press notes. “When I came ot New York, I met the stunt group and what impressed me was they use the work to help build the character.” 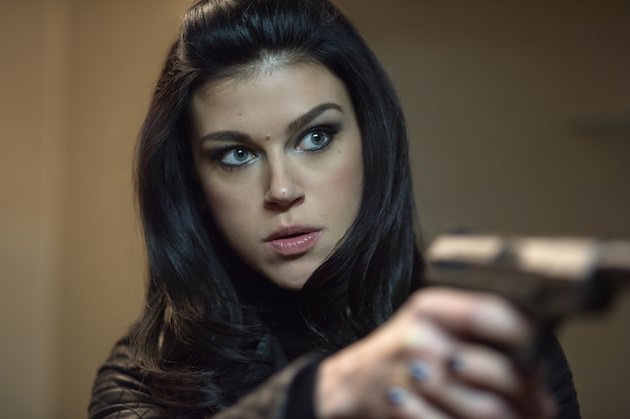 For Adrianne Palicki’s character, Ms. Perkins, she had to train for months to learn her character’s chosen martial art, which she uses in a fight sequence (without stunt doubles) with Reeves. “Chad wanted to make sure I would be willing to do my own stuff in the huge fight sequence I have with Keanu–and I was all game,” Palicki said in the press notes. “I had months of training. I had to learn jiujitsu, which she uses to take him down. It was a lot of pain that led to a lot of gain.”

The directors worked with cinematographer Jonathan Sela, developing a style that helped juxtapose the placid, widescreen shots of the early part of the film, where John is living a normal, if sad, life, with the hyper-stylized New York underworld of assassins. Using anamorphic widescreen, they were able to create larger than life panoramas. In the early scenes, that meant big, sweeping landscapes, in the assassin world, they created a sprawling, neon-lit urban netherworld.

The action itself was, of course, a priority. Eschewing the rapidly shot and edited style where every punch and kick comes in confusing fury of movement, the filmmakers relied on the skill of their actors and the expertly choreographed stunts they designed over months. “We didn’t do any of the things we normally do cinematically,” Leitch said. “There aren’t a lot of fast cuts. We didn’t use a long lens or shaky cam and there are more long takes. Because Keanu could do the stunt work himself, we didn’t have to try and hide stunt doubles.”

Peter Debruge's review for Variety notes how well the action is staged here. "Whereas the tendency among many other helmers is to jostle the camera and cut frenetically in the misguided belief that visual confusion generates excitement, the duo understand what a thrill well-choreographed action can be when we’re actually able to make out what’s happening."

For Reeves himself, Stahelski and Leitch worked with the actor to develop a hybrid fighting style that involves martial arts and gun work, working with 87eleven’s top stunt coordinators. It’s something not seen on film before, and it’s called ‘gun fu.’ In order to pull this off, Reeves had to train for four months, learning judo and jiujitsu. “We wanted to use practical grappling martial arts and mix in guns, so we created a new style of close-quarter combat,” Stahelski says.

You know you're in trouble when Keanu Reeves is wearing all black. 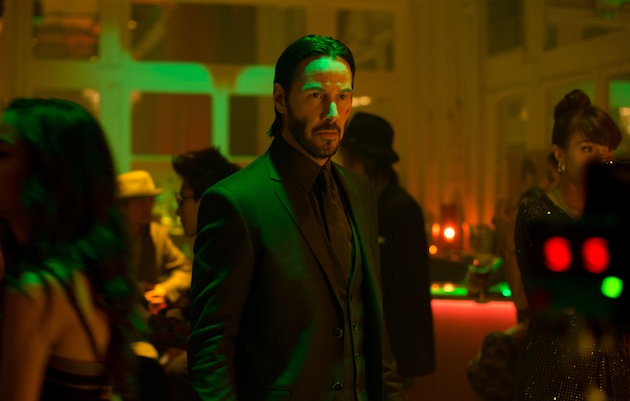