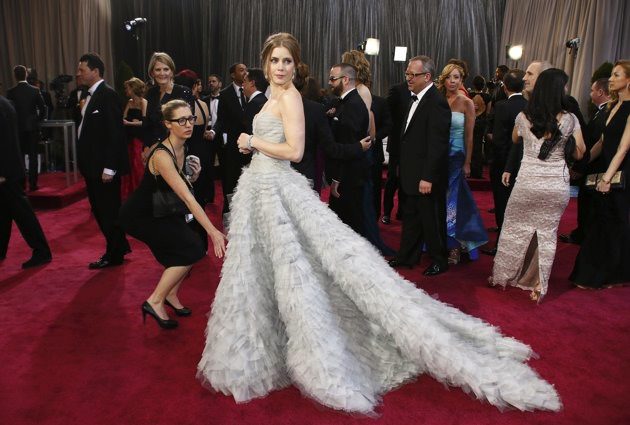 Born in the Dominican Republic in 1932, Oscar de la Renta began his career in the 1950s, in Franco’s Spain, and by the time he passed this past Monday at his home in Kent, Connecticut at the age of 82, he was not only an fashion icon but perhaps the most beloved figure in the entire industry. His dresses were worn by first ladies in the White house, by celebrities at the Oscars, by characters in TV and film and by thousands of models on the runway. His influence on what film and television stars wore both on screen and off was monumental. It was de la Renta's ivory tulle gown that Amal Alamuddin wore when she wed George Clooney in Venice.

On the small screen, De La Renta’s impact was probably most memorably made on one of the most fashionable fictional characters of all time – a New York City writer by the name of Carrie Bradshaw. It was in season six of Sex in the City when Bradshaw finds out her boyfriend, Aleksandry (Mikhail Baryshnikov, naturally) is friends with the man himself. “Oscar? You…you can call him Oscar?” she asks. Aleksandry eventually gives her a De La Renta gown of her own, which she wears to the Met Ball, and McDonalds. In real life, Parker could call him Oscar, as this loving tribute she wrote to the designer in The Hollywood Reporter attests, and wore him to the Met Ball this past year (with his signature on the gown’s train).

In season two of Gossip Girl, Blake Lively’s Serena van der Woodsen was headed to the White Party in the Hamptons and was all set to wear a tuxedo (including a backless vest and a wide pant), but the vest was a bright white, which doesn’t work on hi-definition TV screens. An attempt to dye the vest down a bit ended up shrinking it. Luckily for cast and crew, there was a white Oscar de la Renta gown already in the wardrobe. For a season four episode, Leighton Meester’s Blair Waldorf wears a beautiful red de la Renta gown for an episode set in Paris. There was also the belted, wool crepe green de la Renta dress worn by Madeleine Stowe, playing the venomous Victoria Grayson in ABC’s Revenge.

There are countless more examples of de la Renta's beautiful work appearing on television, but as far as Hollywood is concerned, he is mostly known for dressing stars on their way to awards shows and balls, and the graceful, gentlemanly demeanor that made him stand out in an industry not known for either. The outpouring of love for the man from television stars was immediate.

When it comes to the big screen, he is most remembered for the countless stars who have answered, “Oscar de la Renta” to the first or second question asked every of every woman on the red carpet. Penelope Cruz radiated old Hollywood glamour in this butter yellow strapless de la Renta at the 2005 Academy Awards. Two years later, Jennifer Hudson rocked this brown, gathered waist de la Renta gown paired with a bolero on the red carpet. Cameron Diaz stunned with her champagne tulle de la Renta gown with gold paillette embroidery at the 2010 Academy Awards. Jennifer Lawrence went Back to the Fuchsia (apologies) in this off the shoulder de la Renta at the 17th Annual Screen Actors Guild Awards in 2011. The list goes on, and on, and on.

There have been many loving tributes written to de la Renta since his passing. Anna Wintour, Vogue's editor-in-chief and a friend since 1974, began her remembrance with, "Oscar was a great man." This sentiment resonates in every tribute, from heads of state and longtime friends. To see de la Renta in action, rent The September Issue, R.J. Cutler's documentary about Anna Wintour preparing for the 2007 fall fashion issue, to see the graceful figure he cut in his life. Or read any one of the tributes, or this New York Times obit to get a better sense of how he much more than just the gowns. Or, simply watch the red carpet at the awards shows this year, which no doubt will be a fitting tribute to his greatness.

More than just a fashion icon, de la Renta was a beloved son of the Dominican Republic, a husband and father, a legendary raconteur, and by all accounts, and perhaps most importantly, a generous and warm individual who left his mark not only in the beauty of the garments he made but in the way in which he went about making them.